Are there cuts coming at the Productivity Commission? ... Kim Williams' post-News life ... turning back money

Cuts coming at Productivity Commission? Both major parties are saying they will call on the Productivity Commission to do more reports, but will there be enough staff to perform them? Crikey hears at an executive retreat last week the new PC chairman said up to 25% of the workforce would be sacked because of federal budget cuts. We asked for confirmation this morning, but nobody wanted to talk to us. The commission faces the same efficiency dividend as the rest of the public service and received a tiny increase in its appropriation in the May budget of just over 1%. The budget papers show it already plans to cut five staff this year from its total of just under 200 people.

Williams begins post-News life. Spotted walking on Queen Street in Woollahra, in Sydney’s eastern suburbs, Kim Williams, newly freed from the daily grind of going into the office, cap, red top and shorts, just before 6.55am today. He wasn’t spotted last week or the weeks before. After “resigning” as News Corporation Australia CEO on Friday it seems he’s taking some time to smell the roses …

Will someone follow Kim out? Meanwhile, we hear a favourite executive of Kim Williams might follow him out the door. She’s apparently pretty unhappy he’s left. Stay tuned.

LNP fundraising runs aground. Some political parties don’t even want your money. One Crikey reader reports:

“On August 4, Queensland Liberal National Party president Bruce McIver sent out an email seeking $1 a day ($34) to assist with election funding. That evening we decided to get a bit generous and give $50, but despite many tries the system totally rejected our donation. We then answered Bruce’s email and told him of the problem — we haven’t heard a thing since.”

Asylum seeker: stop the boats. This was doing the rounds of social media late last week. We see the hypocrisy, but perhaps you can argue for the need to stop the boats as a former asylum seeker …?

It’s your money! (Says who?) A Crikey reader in the Melbourne haven of Brunswick copped this sheet in his letterbox last week. Our tipster couldn’t figure out who it’s for/from, but “I’m guessing this isn’t official promo material. Bit crazy.” Indeed … 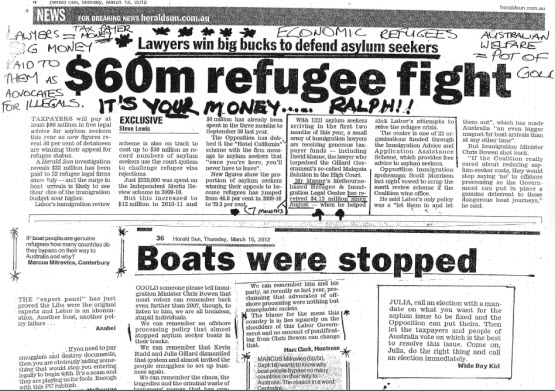 Tour guide: “Who is your local member?”
Kids (in unison): “Andrew Wilkie.”
Tour guide: “And which party does he belong to?”
One smart kid: “None, he’s a spare.”

News Corp ban hard to implement. On Friday we featured the cafe instituting a ban on News Corp publications for the company’s strident anti-Labor stance. But that’s easier said than done, according to one reader:

“My local one-man coffee kiosk in Sydney made no secret to me last week of his complete distaste for The Daily Telegraph‘s ‘shit’ coverage of the election. Problem is, he gets three copies each of the Tele and The Australian for just $2 — delivered — under a deal he says is quite common with small cafe owners. To get the the Fairfax titles he has to go and buy them, and there’s nowhere nearby (he’s a one-man band, remember). To paraphrase him: ‘I don’t like it all, but it’s convenient, it’s delivered, even if rubbish’.”

We’re (mostly) boat people. From the first fleet, to the Aborigines who landed in rude boats[1], to asylum seekers that land in sieves. (yeah, pun intended) How many arrived here in planes?

[1] I’d be incredibly offensive back to a boat if it was rude to me.

But Nguyen wanting to stop the boats? I just think he’s stopped his votes.