The empty ritual of the modern political debate

The leaders' debates are now pointless, sterile rituals designed to avoid errors. And so Kevin Rudd and Tony Abbott fight out a nil-all bore-fest where voters are the only losers. 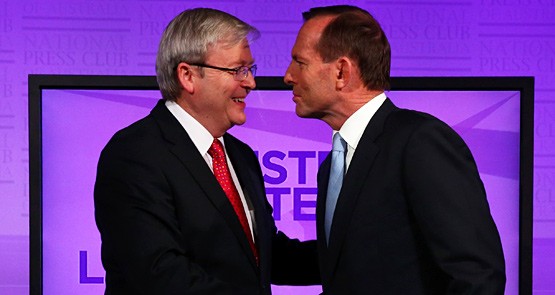 During last night’s debate, there was a telling moment that, if you spotted it, revealed something highly significant about the coming election, something that showed the whole …

Actually, no, sorry, I can’t say that. There wasn’t anything revelatory. There was nothing significant, no key to unlock the whole contest. Yes, I know, it’s de rigueur to dismiss these things as boring, but it wasn’t that. Policy debate doesn’t have to be sparkling entertainment. There were simply two political leaders uttering the same talking points as they say day after day on the campaign trail. Rudd was a bit weird on the parochial Sydney airport question from a Sydney journalist. Abbott was a little thrown by a question on aged care, where he put more effort into pronouncing his shadow minister’s name than articulating a policy.

Otherwise, well, what did you expect from a debate format agreed between the parties and designed to minimise the chances of their chap going off-script or messing up?

After all, you rarely “win” these debates, you can only really lose them. Debates don’t change elections unless you commit some colossal gaffe that characterises your campaign. So the point is to avoid gaffes and stick to the script composed of the dot points that tested well in focus groups.

Accordingly, all possible sources of distraction are removed from the format, anything that might throw a leader off-message. So the format allowed minimal interaction between Abbott and Rudd. The audience in attendance at the Press Club, in the ballroom lit to feel even more sepulchral than usual, was told to stay silent — no cheering, applauding, booing, etc. It was as sterile an environment as possible, with the only distraction Matthias Cormann and Julie Bishop loudly whispering to each other while typing on their iPads in the Liberal section.

“In short, as a samurai laments in Harakiri, what was once a sacred ritual has fallen into idle formalism.”

And the hour-long format with no restriction on topic was too short to allow in-depth consideration of significant issues; the assembled journalists only got two questions each anyway, and both candidates ducked them as necessary, particularly Peter Hartcher’s effort to get them to go beyond the talking points on fiscal policy and grapple with the reality facing governments. Hartcher’s one achievement in that regard was to get Abbott to acknowledge that tax revenue was “under pressure”, something missing from the Coalition’s usual line that Labor’s budget problems are entirely due to its incompetence.

In short, as a samurai laments in Harakiri, what was once a sacred ritual has fallen into idle formalism. The journalists sat at what looked to be rather old desks that might have seen duty when the likes of Michelle Grattan, Ken Begg and Peter Bowers grilled Bob Hawke and Andrew Peacock before an animated, and probably well-lubricated, Press Club audience in 1984. But it’s precisely to avoid what happened to Hawke in that debate — an unexpected loss to a buoyant, well-prepared Peacock — or how Keating savaged John Hewson in 1993, that political parties now insist on a clinically cold, uninvolving format that minimises risks.

If you want a real debate, get rid of the journalists and put real voters in the room to ask questions and let the candidates talk to each other. Confine the subject matter to specific areas. Better yet, dump the moderator as well and get the candidates to sit and face each other and talk for an hour with nowhere to run.

Never happen, of course. The media wouldn’t like being removed from the stage. But it might stop the death by talking points we suffered last night.

Oh, and who won? Rudd had a little more substance, but Abbott got through intact, and he’s in the lead. But the more correct answer is “not bloody us”.

Well, Bernard, we could focus more on getting Tony Abbott to hold real press conferences and answer real, persistent questions. Like Rudd does. Like Gillard did again and again.
The debate did surely throw up one moment of Abbott being Abbott when he flat lied about the GST and how it can’t be changed unless the states agree. The man lies for 3 years and journalists just seem to become numbed. Or chat about how confident he seemed. The debate format is clearly rubbish given the time restraint of 1 hour. Tell me again who is it who actually owns the airwaves for commercial stations to run wall to wall talent shows? Having the moderator wierdly bigger thn everyone else and ask most of the questions was odd.

BERNARD K: Could not agree with you more. At one stage I had the Rabbott marginally ahead, then he reverted to form. He is like a Pit Bull dog, he knows only how to attack the enemy. Also, he should decrease the amount of sport he is into. He is reptilian in his looks and should employ a better make-up person. He looked like Cardinal Mazarin. And who would have voted for him?

NB: It was Cardinal Mazarin who said ‘Get a man to write one sentence only and I will have enough on him to hang him.’

As Michelle Grattan observed, it was like a joint media conference.

I found the response to the aged care question quite illuminating, showing that one party has policies for governing, the other policies for campaigning.

I wasn’t sure who had won until I heard Andrew Robb on the post-debate analysis. As soon as he started baying that Rudd had cheated because he referred to notes, I knew that in the Liberals’ mind the victor was indeed Rudd.