Unsurprisingly, The Daily Telegraph is the early frontrunner for the most disgraceful beat-up of the campaign so far. Plus other notes from the campaign.

Choose the debate winner. I’ll leave the judging of performances by PM Kevin Rudd and Opposition Leader Tony Abbott in last night’s debate to others. What I’m interested in is how people rated the chairman and members of the panel of journalists asking the questions.

Your help by entering here is appreciated.

Campaign reading: I know there are four weeks to go, but surely “Kevin Rudd: hero or psycho?” by Andrew Carswell in the Sydney Daily Telegraph will end up being hard to beat as the biggest and most disgraceful beat-up of the campaign.

“A giant ego. A narcissist. A micro-manager. An impulsive control freak. A haphazard and secretive decision maker. This is not what Kevin Rudd’s political enemies think of him. It’s what many of his colleagues do. …

“The outspoken and literally outgoing member for Bendigo Steve Gibbons took to Twitter and publicly declared his former leader a “psychopath”. … So is it true? Is the man running this country really a psychopath, given the aforementioned ferocious descriptions appear to tick plenty of the boxes that define such a diagnosis?”

Pop psychology at its worst. A pathetic attempt to smear the Labor leader.

And Queensland’s Sunday Mail was not much better with this photoshopped cartoon approach:

I note that the author was not proud enough of that piece of work to claim a byline for it, so the minus mark on our journalists is attributed to Anonymous.

“Asylum seekers find their own PNG solution as Somalis sail to far north Queensland” — Like or loathe it, the debate was surely should have been the story of the day for newspapers. Except for the The Courier Mail. Up north they brought out the developing tabloid attack dog Gemma Jones to write on asylum seekers sneaking in through a porous Torres Strait. She moved to the bottom of our journalist of the campaign table with another minus score.

Laura Tingle in The Australian Financial Review seemed to me to get to the heart of things with her “Voters left wondering as neither leader spelt out real agenda“. For me the debate did nothing but confirm my own starting prejudices,and for Tingle “the whole lack of real agendas for the next term of government on both sides really stuck out in last night’s debate”.

It’s hard work being the footsoldier doing the daily colour writing on the campaign trail. The big stars of the papers grab anything that approaches being real news leaving you with the froth and bubble. It’s hard to avoid seeming lightweight, but Jacqueline Maley of The Sydney Morning Herald has been making, as we say, “a good fist of a bad job”. Saturday’s effort in the paper’s news pages, “Amble a scramble as family stops show“, neatly highlighted the importance of daughters Frances and Bridget to father Tony Abbott’s campaign. Further back on the feature pages she was given more space for a detailed look at the campaigning week with “Clever Abbott is continuing to keep voters in the dark” providing a glimpse at the importance on the Liberal campaign team of federal parliament’s longest-serving member, Phillip Ruddock.

“Philip Ruddock is a quiet presence at the edge of Opposition Leader Tony Abbott’s campaign. Unlike Kevin Rudd’s chief adviser, Bruce Hawker, he is not pictured striding through airports with his boss, and his media profile these days is minimal.

“The former immigration minister and attorney-general, whose reputation was once so fierce, and who was so hated by the left, is now a shrunken, almost grandfatherly figure. He hovers and hangs back. He is there for Abbott when he needs him, but his chief role is to support, not to direct.”

Paul Kelly’s “Kevin Rudd and Tony Abbott must sound reform warning” in The Weekend Australian argued that while Kevin Rudd declared the death of old politics as the key to election 2013, the first week of campaigning proved that old politics remains dominant and Australia’s extremely risk-averse political system threatens our future. 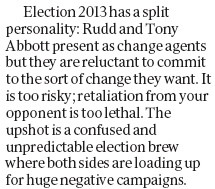 Only a slight hedging of her bets by Laura Tingle in Saturday’s Australian Financial Review with her “Voters’ love affair with Rudd may be just a passing fling“. Most political journalists, including me, try to avoid predicting an election result out of fear of the humiliation that comes if eventually proved wrong, but there’s not much doubt about the expected outcome in these words inspired by a new Nielsen poll:

“The 48-52 split it reports in the two-party preferred vote simply confirms the pattern set by most published polls in the last week or so, and also confirms the lack of any sense of momentum in either direction in the first week of campaigning. Yet the release of the Nielsen poll could shift the base from which the campaign is assessed: from pondering whether Labor could pull off an unlikely win, to a certainty that it faces a significant defeat.

“Labor needs an 1.1 per cent swing towards it to stay in office. The Nielsen poll suggests that is not happening. It is unprecedented in the past 20 years for there not to have been a swing of at least 3 percentage points over the campaign period. But the poll figures showing voters’ love affair with Kevin Rudd is cooling suggests that if things continue as they are, the swing will be in completely the wrong direction.”

Writing about economics in a way that mere mortals can understand should be an even more valued skill than normal during an election campaign, where past, present and future economic management combine to form the number-one issue. Jessica Irvine in the Murdoch tabloids, headlined “Politicians pledge billions to buy your vote” on News.com.au, shows she is one writer with the skill, helpfully outlining  how politicians have a number of tricks up their sleeves to both exaggerate and hide, when it suits them, the cost of their election spending binges.

“Want to look generous? Announce your funding over a multiple years. Half a billion dollars for an upgraded bypass? Of course, that’s over 10 years. Oh, and work won’t begin until 2018.

“Prefer to look fiscally responsible? Make a point of noting that the money you’re spending is from an already budgeted program. The Howard government pioneered this unique tactic with their Regional Partnerships Program, or ‘regional rorts’ as it became known. The trick is to stash some cash aside at Budget time in a deceptively named bucket called a “local jobs boost program” or a “regional investment fund”.

“Then spend your election campaign merrily skipping your way across the country’s most marginal electorates, sprinkling cash like rose petals as you go. You see, the money has already been set aside, so it’s not really spending, is it?”

“Worm turns for Rudd but no clear champion” — Age economics editor Tim Colebatch explains the differences in the results between the debate-response measuring systems of the Seven and Nine networks — the hijacking of the meters by bipartisans.

On our journalist of the campaign honour board there are now four joint leaders.

Campaign listening: ABC 720 Perth. With last night’s television and the morning newspapers and radio news  bulletins full of it, Eoin Cameron wisely chose to largely avoid the leaders’ debate and stick with somewhat lighter fare for most of his breakfast program. I’m sure that most of his listeners found the discussion with neuro-psychologist Jenny Ogden far more interesting than another assessment of who said what, and won how, would have been. There might even be some who wished that Rudd and Abbott had the same ailment as patient of Ogden’s, who had lost the ability to speak through a brain injury but could still sing. Certainly the commemoration of Eydie Gorme’s death at the weekend was brightened  by playing Blame it on the Bassa Nova, and perhaps those lyrics about not wanting to go anywhere with you from another selection were intended as a judgement on the previous evening.

Not that QBC 720 breakfast was a policy-free zone. There was one of those pre-recorded vox pops with some good citizens of Perth at a shopping centre that at least had sensible questions and balanced answers and of course the doses of AM. That was quite enough, surely, for a Monday morning while driving to work.

The ABC conducted an experimental Twitter tug-o-war during the leaders’ debate, asking people to vote for who they thought was winning using the hashtags #DebateRudd and #DebateAbbott. More than 500 responses were received; half an hour after the debate ended 72% of respondents said Rudd had won, compared with 28 per cent for Abbott. 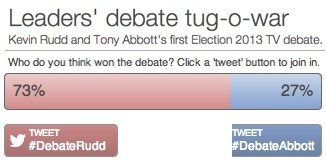 And a few more verdicts from viewers:

From the letters page of the Sydney Daily Telegraph: 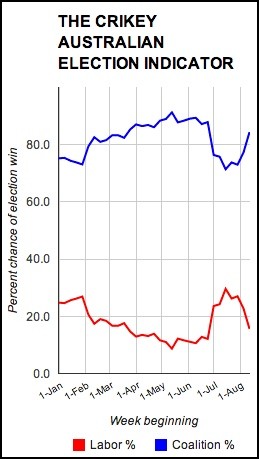 Who “pictures” Hawker striding through airports with his boss – do they wait to get the “right shot” according to editorial edict, and who edits that “media profile”?

can’t think why you call the ‘Rudd’s a psycho’ article a beat up. Seriously. He just is.