Kim Williams has been booted from News Corp and replaced with Julian Clarke. Smart move, or the beginning of the end?

Williams says the management change at News is all about Lachlan Murdoch, but Chenoweth’s more accurate view is that the upheaval and the problems now gripping News Corp, especially its Australian print assets, mean “News Australia has topped itself”. Williams’ analysis was fantasyland stuff. Williams wrote:

“In the internal politics of News, Kim Williams was simply road-kill. Lachlan Murdoch’s star is rising and Williams’ departure indicates that Lachlan’s influence and harmony with his father is secure.”

But no such misty-eyed lunging from Chenoweth, who remains the only journalist writing with considerable knowledge and insight in the Australian media about the Murdoch empire. He summed up Kim Williams’ departure:

“Williams had his faults and made mistakes. but if News Australia wants to have any sort of digital future, it needs a strong arm running the show. Col Allan and editors such as The Australian‘s Chris Mitchell have made that impossible, replacing Williams with a figurehead, Julian Clarke.”

“Australia is critical to News Corp’s future … Murdoch’s Australian newspapers, like newspapers all over the world, are dying. If they are to have a digital fiture, then they need to change. When they do digital, they often do it well – but the preferred management strategy is to appoint an old newspaper exec and say, ‘Listen up kids, this is how it’s done’. And this telling point was also made; ” News Corp Australia is locked in a bitter struggle, not only with the age old enemy Fairfax Media, but with itself.”

Just as fanciful was the miserable coverage of the change of leadership at news in the media section of The Australian this morning. Talk about ignoring the credible and defending the impossible. “New News chief a steady hand,” blared the headline on the “exclusive” Darren Davidson story; “Editorial, revenue back at the centre of company strategy,” said a smaller “exclusive” by the same author. The latter story predicted that new CEO Julian Clarke will make a “major hire” in the coming weeks. Both stories were what senior News management told the journalist and the paper.

Chenoweth started his comment piece with this very accurate claim: “After barely a month, Rupert Murdoch’s journalism project is a shambles. All the Crazy Uncle features or Murdoch’s management style were on display in the past week. They speak of a deeply dysfunctional corporation that has been a hotchpoth of diverse assets that fight each other for the only true measure of success — Rupert Murdoch’s attention.”

Chenoweth was the only commentators to understand the futility of appointing 70 year old Julian Clarke to run a dying newsprint-based company. No matter how little time he spends as CEO, News will be further damaged by the delay and lack of a coherent digital strategy. If it was Fairfax doing this, News’s pack of Col Allan acolytes would have been all over the story, jeering and sneering across the various papers.

News Corp can’t even organise the release of the 2012-13 financial results — as the larger bit of the Murdoch empire, 21st Century Fox did last week (and then held an investors day as well). The old News Ltd doesn’t appear to have made public its 2011-12 results either (They are understood to contain multi-billion dollar losses). There’s talk of releasing first quarter figures in early November, when 21st century Fox releases its figures for the same period. Valuations in either document will tell us the real truth about the NewsCorp papers — that in terms of future profits, they have little or no value whatsoever.

And the winner is … Last night’s debate between Prime Minister Kevin Rudd and Opposition Leader Tony Abbott was certainly not a decisive victory for either side; on that point alone media outlets seem to agree. News Corp papers The Courier-Mail (pictured below left) and The Daily Telegraph (pictured below right) were split as to who won, with the Courier-Mail calling it for Rudd (while pointing out he might have “cheated” by using notes) and the Tele declaring Abbott the winner.

Fairfax’s The Sydney Morning Herald didn’t choose a winner (the front page declared neither side had a “killer punch”), but on page nine (pictured below at left) commentator Jane Caro said Rudd “wiped the floor” with Abbott on body language, eye contact and presentation. Stablemate The Age (pictured below at right) also did not call a winner but ran a graphic showing the diverse media response. 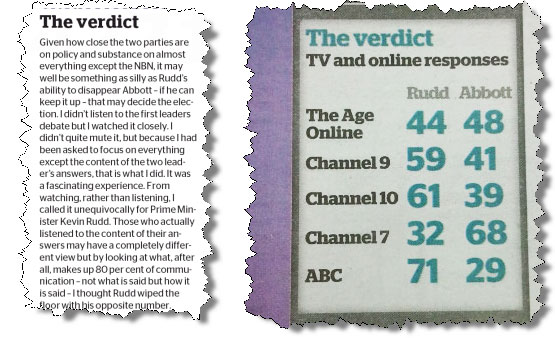 The Australian did not choose a winner at all, and its stable of commentators were also split. 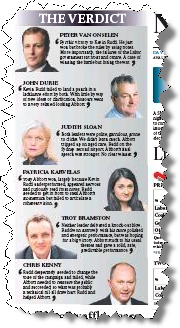 The conclusion? No one won, and everyone was bored.

That’s some baaaaaad subbing. The New Zealand-based subeditors of The Australian Financial Review seem to have conflated supply and demand in a yarn about the surging popularity of goats’ milk on Friday. The headline says the supply outstrips demand, whereas in the story it is the other way around. We’re not kidding around, but subs on a business publication not knowing the basics of business principles really gets our goat. 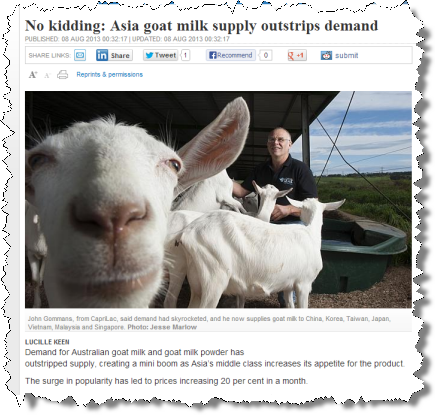 Murdoch’s Limited Empire – where would Fuxtel be without Barry Diller?

You missed a pun on “stripping” too (re hand-milking).

That’s the trouble with a nanny state.

Well played, sir. I hope I didn’t come across too gruff.