The Liberal Party has been spending up big on promoted tweets and Facebook advertising -- both totally above-board marketing tactics. But the party is now facing accusations of buying tens of thousands of bogus Facebook "likes" and "fans", writes Matthew Knott.

The Liberal Party has denied artificially inflating its social media support after an eye-watering spike in “likes” for the party and leader Tony Abbott’s Facebook pages.

Abbott has now zoomed past social media devotee Kevin Rudd in Facebook popularity with over 130,000 likes. This is up from around 78,000 a week ago and well above Rudd’s 101,058. Abbott’s Facebook statistics page shows the Opposition Leader received almost 20,000 extra Facebook likes last Friday alone.

Abbott’s page received over 60,000 new likes in the week of August 3-9 — up from only 845 the week before the election was called. 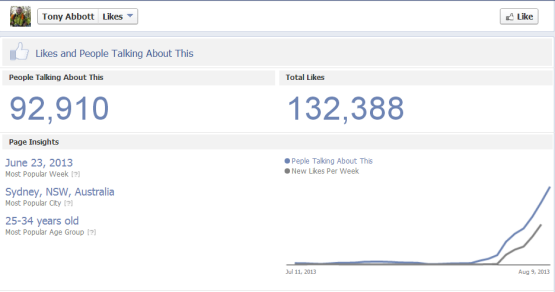 The Liberal Party’s official Facebook page has also had a spike in activity and now has over 127,000 likes — more than any other party. Activity on the Labor and Greens pages has been far steadier over the same period.

The Liberal Party announced yesterday that it would investigate the purchase of fake Twitter followers for Tony Abbott, whose account soared from 157,000 to 198,000 on Saturday night.

“It’s really clear what they’re doing: they’re pouring heaps of money into promoting their page,” said Australian Services Union NSW secretary Sally McManus, who is co-ordinating the Australian Council of Trade Union’s social media campaign for the election. “It creates a false impression that they’re much more popular than they are.”

McManus estimates the Liberal Party has spent hundreds of thousands of dollars on sponsored Facebook posts.

A Liberal Party spokesman told Crikey today the Facebook spike was “legitimate” and its followers “are absolutely connected back to real people”.

Social media consultant Hugh Stephens says there could be several explanations for a spike in Facebook support. These include increased interest following the announcement of an election date; big spending on sponsored posts and advertisements; or the purchase of fake Facebook likes.

Blogger Llewellyn Stevens first addressed the spike in support for Abbott and the Liberal Party in a post on the weekend.

There are other fishy things happening as well. Earlier there was a huge spike in people making the precisely same comment, not retweet but *same* comment all within a short period of time about the australian greens, from accounts not even remotely related to australia, finally someones been registering fake “muslim” accounts en-masse to troll the ALP page about how allah hates muslims, using implausible muslim names that sorta sound arabic and photos pulled from muslim dating sites.

Don’t believe any thing you read,nor anything you hear because it is fabricated in the first instance, and subject to brain washing in the latter.

oh the lnp facebook page has lots of “likes”?

well heck i’d better “like” them too i don’t want to feel left out.

There has been a sponsored post apoearing on my Facebook page inviting me to likeTony Abbott’s page over this past week. I have no intention of doing so and I looked in vain for an option to comment or remove the post! After that ad blitz the “Likes” are not that impressive in number! I don’t think Mr Abbott’s campaign has received value for money!
PS: Seriously does any one know how I can remove this annoying sponsored post from my Facebook page?