Chinese banks and government bodies are pumping money into the country's ailing economy. But as Michael Sainbury writes, officials are refusing to call it a stimulus measure. 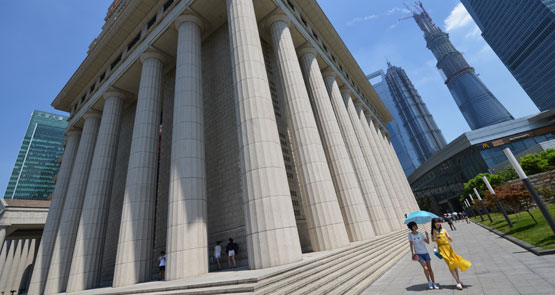 Just when many thought the fall in China’s economic growth showed no signs of abating, its government has ramped up a stimulus program worth trillions of yuan that has turned assumptions on the imminent plunge in prices for iron ore and other commodities on its head.

The stimulus-you-have-when-you-are-not-having-stimulus is designed to prop up rapidly fading growth in the world’s second largest economy — last quarter’s figure was 7.5% and concerns were it was heading lower still. The 7.5% is the government target but generally considered a bottom line until last month; the annual figure will be its lowest level in more than two decades.

This stimulus — which won’t be called that; it’s bad economics you see — is good news for Australia’s mining companies, particularly smaller high-cost players, as well as number three player Fortescue Metals Group. July’s iron ore exports hit a record high volumes, steel prices are on the rise and all the signals on the  had returned. Other hard commodities such as aluminium, copper and coal also saw record volumes and the key electricity production index did not dip.

China’s official line on its economy shifted last month when Premier Li Keqiang set the stage for more stimulus, saying: “The bottom line for economic growth is 7%, and this bottom line must not be crossed.”

So this has now emerged as an imperative for the ruling Communist Party, and pushed to the head of the priority queue ahead of the deep, painful reforms necessary to re-structure an economy unanimously said to be dangerously unbalanced. By bolstering the economy at this time, Li aims to give the leadership ammunition against its internal conservative party critics at it battles them for an effective reform agenda.

“This upturn is the result of another round of desperate stimulus,” Beijing-based J Capital Research managing director Tim Murray told Crikey. “The underlying economy is weak. Stimulus is less effective and this upturn will be short lived. Li Keiqang’s rhetoric is rebalancing and actions are stimulus. A lightly different flavour, but basically the same as the last leadership.”

At the sharp end of the latest government strategy is understood to be a move by the People’s Bank of China to tip as much as 500 billion yuan directly into the economy, say sources in Beijing close to the government. This is in effect quantitative easing — or in old fashioned terms, printing money. While the exact details of its size and destination have yet to emerge, at present this move is opaque but most likely being used to help refinance local government investment and the troubled property corporations, some suggested.

The government has massively ramped up a US$40 billion project to build a tunnel across the 123 kilometre-wide Bohai Strait, increased infrastructure spending on railways and metropolitan subway systems and conducted government-sanctioned off-balance sheet financing known as “social financing” — trust loans, bank assurance deposits and other sophisticated instruments — despite being down from its dizzying levels of more than 2 trillion yuan in January, providing more than 1 trillion yuan a month in the background.

This morning The South China Morning Post reported the mainland government is “quietly” offering financial stimulus to key cities and provinces. As well, Shanghai is taking up a huge loan from a state-owned Agriculture Bank. The paper said the city government last signed up for a loan worth 250 billion yuan — equivalent to about 12.5% of Shanghai’s GDP — for last year.

So social financing growth is taking up where the banking sector left off, but there are risks here too and the latest round of government spending comes as the efficacy of monetary stimulus — a key plank throughout the 2009-2011 stimulus program — is waning. As Macquarie Bank commodities analyst Graeme Train said in a client note last week:

“The market’s focus has now turned to the waning effectiveness of monetary expansion: despite faster growth in outstanding Social Finance since mid-2012, the pick-up has been disproportionately weak. This trend was also captured by our Li Keqiang index (a group of measures including rail fright, electricity use and loan volumes named after the Chinese Premier). The index has been running relatively higher than GDP growth since 2009 and that is largely a result of faster liquidity growth (relative to GDP growth) since then. So monetary policy probably started losing its efficacy long before the market noticed it, in our view.”

Last September, China’s main economic ministry, the National Reform and Development Commission, fast-tracked 60 infrastructure projects worth 1 trillion yuan as the economy showed its first real signs that it would start to slip below the annual 7.5% target in the latest five-year plan. At the time this was seen as a stimulatory measure and much of that spending is starting to flow through the system now that top jobs at state-run enterprises have been settled following the leadership changeover.

It now appears to have been the first step of a softly-softly approach to provide government funds to prop up the country’s troubled economic model.

Beijing deliberately engineered a slow-down in the economy over the past 12 months, but it has been exacerbated by the wildly untargeted 2009-2011 stimulus nominally worth 4 trillion yuan but was, by estimates, about 20 trillion yuan. So any new stimulus will be impossible to quantify. But even if it’s only worth one-quarter of the last that was, say, 1 trillion yuan, it will equate to almost half the government official spending in this years budget.

“They are setting limits to the slow-down but this will be targeted stimulus,” said David Bloom from HSBC. “They won’t throw money at [just] anything.”