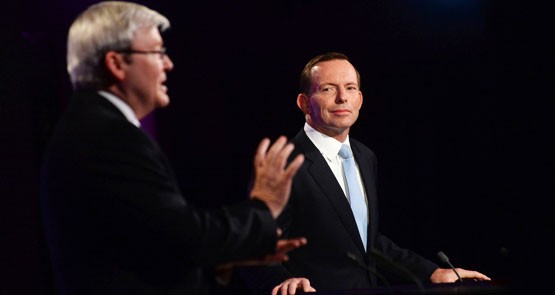 WHO WON THE WEEKEND?

Bernard Keane, Crikey Canberra correspondent: Like many things in this election campaign, people saw in last night’s debate whatever they wanted to see, but Tony Abbott got through the pro forma exercise intact, which as frontrunner is all he needs. A couple of polls, regardless of how they were spun by journalists, showed his narrow lead being maintained or slightly increased. The City to Surf run wouldn’t have hurt him either. A solid weekend for the Opposition Leader, while Labor needs to work out what, if anything, is going to cut through.

Richard Farmer, Crikey election analyst: The Crikey Election Indicator over the weekend recorded a significant increase of 6.4 percentage points in the probability of a Coalition election victory, now at 84.4%. That’s almost back to the level recorded before former prime minister Julia Gillard was dispatched, and I’m prepared to accept the judgement of the market that Saturday and Sunday were clear wins for team Abbott.

John Hewson, former Liberal Party leader: This was a debate Rudd had to win decisively to give the much needed boost to his campaign, especially after a lacklustre week and recent slippage in the polls. While Rudd had a slight edge on style and rhetoric, Abbott was effective with clear, simple concise messages. Abbott obviously had decided to be disciplined and professional, making it very hard for a verbose Rudd to land a “killer punch”. Rudd also weakened his performance by tampering with the rules — reading his opening and closing remarks, searching for figures, etc — and attempting to mount a scare campaign on the GST. He also probably damaged his campaign in western Sydney, where he must hold several key seats, with his appalling answer on the second airport.  The debate didn’t really change anything in terms of overall perceptions/substance. Rudd still has it all to do, maybe more, and it is still Abbott’s to lose.

Nick Reece, former adviser to Julia Gillard: In terms of the contest Kevin Rudd had the edge. His decision to use the debate to announce a commitment to same-s-x legislation was a clever tactical move as Tony Abbott was left defending the indefensible. Abbott was not strong enough on Coalition costings and given this was an issue in the 2010 election he should have had a better response. Kevin could have performed better on the Sydney Airport question, although his use of prepared notes was an unnecessary distraction. It’s hard to split them, but on the overall outcome, Rudd.

This morning marks the Coalition’s first major spending announcement since the launch of the campaign. While the debate made headlines over the weekend, both the Coalition and Labor have made additional cash promises since Friday.

Kevin Rudd: The Prime Minister is in Sydney today, where he is visiting the marginal seat of Bennelong for the second time in two weeks. Bennelong is currently held  by former tennis star John Alexander with a 3.1% margin. Rudd also visited the Australian Hearing Hub late this morning and is expected to make an announcement on jobs within the next few hours.

Tony Abbott: Opposition Leader Tony Abbott began his day in Melbourne with a press conference at Vic Roads in Kew, where he announced he’d like to be known as an “infrastructure prime minister” and promised an annual infrastructure statement should the Coalition be elected. After detailing funding for national roads, Abbott then moved to the electorate of Deakin, currently held by Labor MP Mike Symon with a 0.6% margin.

Christine Milne: The Greens leader remains in Melbourne today and is responding to Rudd’s comments on marriage equality in last night’s debate. Milne has been in Melbourne since Saturday for the official launch of the Victorian Greens campaign and is expected to depart for Hobart this afternoon to engage with her electorate.

Abbott fell prey to some rather unfortunate placard placement this morning while speaking to press in the electorate of Deakin, as pointed out out by Paul Howes. 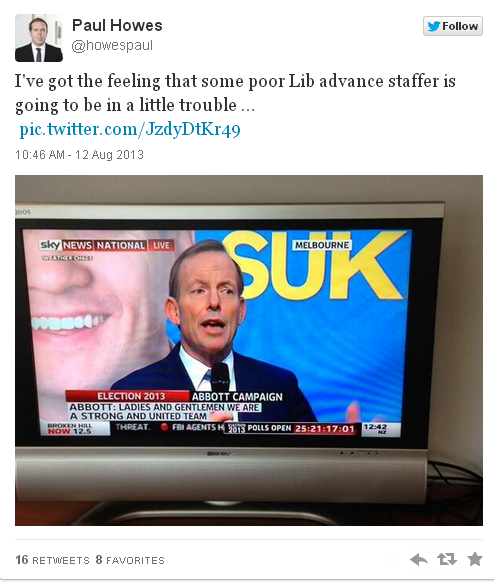 Abbott isn’t the only Liberal politician working up a sweat through early morning exercise.  Deputy Opposition Leader Julie Bishop took to Twitter this morning to showcase her run for office and her penchant for late-night pizza.

The so-called ‘great debate’ was a fizzer.

Abbott should give up some of his physical activities as he is so thin as to be reptilian. He looked like Cardinal Mazarin. (He who said ‘Get me a man to write one sentence only and I will have enough on him to hang him.)

Andrew Robb’s rant and the spin that Rudd ‘cheated’ means the Liberals think that Rudd won.

Next time can these two compete in a bake-off Instead? Please.

ZUT: They should both be fried alive.

Julia Gillard would have had them grilled, fried, and roasted. Bad losers trying not to lose and doing it badly. Going through the motions – no vision, no plan, no commitment( other than to themselves), no passion, no bathos, no policies really, just regurgitating old hates and failings. Surely the electorate deserves better. Having stalked Gillard, run her through a Kangaroo Court in the Parliament, insulted and vilified her, she is an ever present Ghost for both Abbott and Rudd to justify their destruction of her legacy or calling it their own.
Equally the sidelining of Turnbull. Abbott has never risen to what Malcolm Turnbull might have achieved for the Liberal Party. Are the electorate any the wiser or are we just watching Master Chef – at least we are not watching Australia has Talent as neither of these 2 know the meaning of the word.