The local market stayed steady despite a number of surprise announcements from major players. 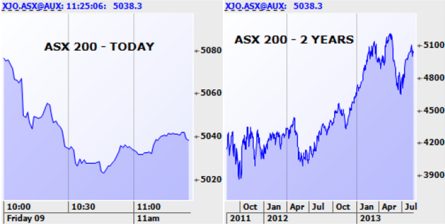 No waves from the Bank of Japan meeting.

Resources well up with BHP up 4.62% and RIO up 3.33% in the US with BHP closing at the equivalent of 91c up on its close in Australia yesterday. RIO was reacting to a combination of the Chinese numbers and its interim results last night which if anything were a bit below expectations.

JP Morgan fell 0.9% — the company is being investigated over its mortgage-backed securities business.