Is News Corp going to try to force Telstra out of Foxtel? There's talk it will happen, but it could cost billions.

Helpful questions from the Coalition. The Liberal Party is finding  journos’ questions to Prime Minister Kevin Rudd on the campaign trail too soft. In a bid to boost quality journalism, the Coalition has sent out a helpful list of questions they might want to ask the PM. ABC journo Latike Bourke tweeted them: 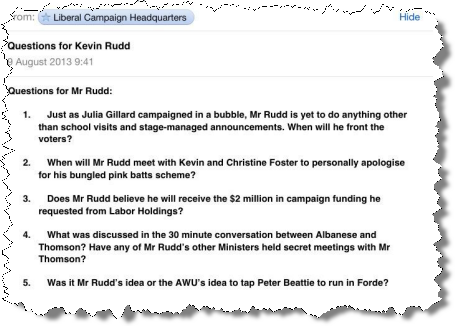 The problem with the Coalition tactic is that, by sending these to a number of journalists, they’ve guaranteed the questions will come to light and that no self-respecting journalist (yeah, OK) will then ask them, even if they ‘d already planned to ask something similar. So, a helpful hint to Coalition HQ: next time, pick up the phone and ring a hack you think will do your bidding, rather than spamming the Prime Minister’s entire bus. — Bernard Keane

News Corp and Telstra raid Foxtel. Struggling News Corp Australia and very wealthy Telstra have both raided the cookie jar at Foxtel in the wake of the 2012-13 financial year. Foxtel’s two shareholders, Telstra and News Corp, distributed a record $300 million to themselves for the 2012-13 financial year, according to Telstra. The Telstra annual result yesterday revealed that the distribution to it jumped by a massive 38.8% from the previous year’s distribution of $108 million. For News Corp, the increase is significant. Last year it split $108 million with Consolidated Media; this year, after buying that company in late 2012, it grabbed all of the $150 million, which will come in very handy as it deals with sliding revenues, rising losses and an impairment of up to $US1.4 billion in the value of the group’s Australian newspapers.

Telstra also revealed an interesting detail: that Foxtel is the single biggest customer for Telstra and one of its largest suppliers, if not the largest. Telstra also revealed that it “purchased pay television services amounting to $655 million (2012: $649 million) from our jointly controlled entity FOXTEL”. There’s a belief that News Corp will try and force Telstra out of Foxtel in the next year or so to try and grab control of the immense cash flows at  the pay TV operator, but that could cost News close to $3 billion to $4 billion, plus the debt in Foxtel, or more than $5 billion. — Glenn Dyer

No News Corp here. One Brisbane cafe owner has had it up to here with Rupert Murdoch’s right-wing newspapers and their blatant electioneering. In a notice plastered up and circulated on Twitter this morning: 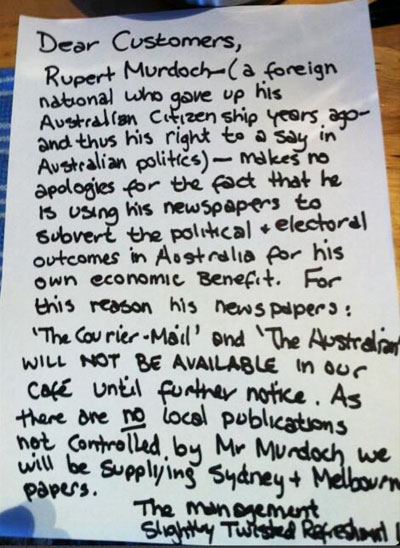 Video of the day. Comedian Stephen Colbert was supposed to have band Daft Punk on his show, The Colbert Report, but the band pulled out to appear on MTV instead. Undeterred, Colbert, rounded up a bunch of celebrity friends, including Hugh Laurie, Matt Damon, Jimmy Kimmel, Bryan Cranston and even Henry Kissinger, for an epic dance sequence to the band’s hit Get Lucky.

Just when I was beginning to sink below the murky surface the Slightly Twisted Refreshment Cafe has come to the rescue.

The simplest ideas are often the best, well done to the management of that cafe. (what’s its name? I might have to start frequenting it).
I may start posting signs with a similar message, with the blanket coverage the Murdoch press has, it’s the only way anybody who does not share Rupert’s views can get theirs heard.