Kim Williams has walked from the nation's most powerful media post, putting a print and company loyalist back in charge at News Corp Australia. Williams was on borrowed time according to insiders. 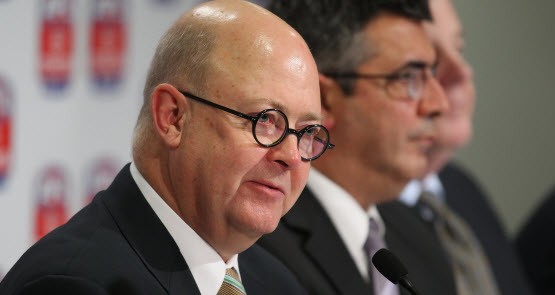 The resignation this morning of highbrow opera and Campari fan Kim Williams from the top job at Holt Street has come as relief for some News Corp Australia senior journalists and executives, who say they are finally free to rip off the yoke of spreadsheets and KPIs and get back to reporting.

Williams, admired for building up Foxtel over more than a decade before the advent of fast broadband and bit torrent clients, has battled in his 20 months in the CEO’s office, after being tapped by Rupert Murdoch to slash costs by 20% over three years and embark on a management consultant-driven reform agenda.

Now, 69-year-old Murdoch loyalist and keen tennis player Julian Clarke — a former Herald and Weekly Times MD who resigned as a HWT director alongside Rupert’s sister Janet Calvert-Jones just two months ago — will be tapped as CEO, with speculation rife today that he is a placeholder before an expected transition to Lachlan Murdoch.

As Crikey revealed on Monday, there has been significant unrest inside News over the merging of the ad sales teams into one national edifice, the streamlining of 19 editorial divisions into state-based conglomerates and the pained introduction of the $60 million EIDOS Methode production system.

The $10 million marketing pitch for the “News+” subscription brand has also foundered, with a marketing insider telling Crikey that “the only thing News is producing in abundance is a truckload of internal PowerPoint presentations, hiring consultants, shuffling papers and org charts and scratching their heads as to why audiences are leaving in droves”.

The initiatives formed part of Williams’ riding instructions from Rupert to streamline operations, and were bedded down 13 months ago in this now infamous fireside chat when mass redundancies were announced across the company.

Highly-paid Boston Consulting suits were drafted in to effect the changes, however their looming presence in Holt Street corridors supremely pissed off newsroom staff as endless meetings and presentations cut into precious newsgathering time.

A senior News source confirmed to Crikey that a Nick Leys Australian item reporting that Williams told a Col Allan gee-up session nine days ago he had “journalism at its pulsating heart” and was “actually an editor at heart” was viewed as either an 11th-hour plea for relevance or a suicide note. A paragraph detailing the unease with the presence of ex-Boston operatives at the meeting was removed from the online version.

At a broadside delivered against News at a press conference early this afternoon, Prime Minister Kevin Rudd referred specifically to last week’s meeting, saying editors were told “to go hard on Rudd, start from Sunday and don’t back off”.

Media reports this morning have focused on the role played by the recent arrival of New York Post editorial supremo Allan to reenergise the tabloids, also mentioned by Rudd. But internal unrest has been bubbling for many months. On another view, Williams had done what he was hired to do: bed down a new structure in the company as a “change agent” and then make way for a revitalised editorial focus. That was the line peddled by New York-based News Corp CEO Robert Thomson: in a statement lodged with the ASX, Thomson explained that:

“Kim feels now is the right moment to leave the company, which he has served for two decades, following the successful implementation of the first stage of News Corp Australia’s strategy to drive integration and improve efficiency, to invest in its editorial products and publishing system, and secure a path of growth in a multi platform world.”

In an exclamation mark-laden farewell email sent to staff this morning, Williams hinted at the issues that have plagued his reign:

“There have been many good wins matched with some memorable awful problems and opponents! It has all been the stuff of a rich and varied professional life that I would never have had without the benefit of the trust reposed in me by many great colleagues at News Corp.”

Senior News sources explained the relief this morning, describing the mood on the newsroom floor as “bouyant”: “There was a strong feeling among senior journalists that Kim was considered to be a management guy. Harto actually had ink in his veins while Kim was just this bizarre detached figure. The News culture is one where you actually have the journalists running the company.”

Clarke is a member at Royal South Yarra and went down in the final of the “over 100” mens’ veterans club championship doubles last year to the dynamic duo of David Hepworth and Antony Hearnden (the combined age of the players would seem to have to top a tonne). A genial and respected figure, he looked uncomfortable giving evidence in the witness box against Bruce Guthrie at the latter’s Supreme Court unfair dismissal trial in 2010.

He is expected to work as a peacemaker inside Holt Street, using his diplomatic skills to work with editors, maintain a bridge with the Murdochs and talk to advertisers. At Clarke’s HWT farewell drinks Rupert apparently dubbed him the “perfect publisher” because he could take angry calls from politicians but still let the editors do their job.

While the “new News Corp” will likely generate earnings of over $850 million this financial year, its Australian newspaper division is foundering with The Australian copping heavy losses but working hard on a turnaround. A lumbering cost base has been blamed across the group for continued poor performance. News Corp’s share price on the Australian Stock Exchange was up nearly half a percent to $17.93 as Crikey‘s deadline approached.

Col Pot’s war on Rudd: how the tabloids turned under Allan

Geez, his wife might have threatened to divorce him. I would hope.

Pushing thru the marketing
So many editors sighing
News Ltd had just come on,
We had five years left to cry in

Rebekah Brooks went off her head
Hit some tiny politician
If Rupert hadn’t a-pulled her off, I think she would have killed them

A journo with a broken source, fixed his stare on the twitter
The cops knelt and kissed the feet of the Sun King
And I threw up at the sight of that
I think I saw Fairfax in an ice-cream parlour
Drinking the Kool-Aid all day long
Smiling and waving and looking so fine
Don’t think you knew you were in this song

And it was cold and it rained and I felt so uninformed
And I thought of proper journalism and I wanted to get some of that
Your thoughts, your analysis, the way that you express
I kiss you, you’re beautiful, I want you to walk

This calls for some vintage IPA:

That [Kim Williams] is both an outsider and has a background in broadcasting and, more particularly, broadcasting technology makes him an excellent appointment. The last thing [NewsCorp] needs is an ideologue to the taste of [NewsCorp] staff.

[Robert Thomson’s] problems with [his] reshuffle will be how it is perceived. [His] danger is it will be seen as [executives] deserting a sinking ship and that it adds to an impression of chaos, which can be used to fuel doubt about [his, and Rupert’s] judgment.

“The shadow of [Kim Williams] hangs over him,” [insert name] says, referring to the CEO who attempted to shake up the organisation, triggered a revolt by staff and supporters, and resigned 18 months into his five-year appointment.
The [NewsCorp] organisational chart, which shows a series of program producers answering to heads of news, current affairs, [tabloid bullshit] or the like, can best be viewed as a collective of staff collectives. The easiest way for a manager to consolidate his or her position in the organisation is to be seen to stand up for the staff below them, entrenching the will of the collective.