Week one of the election campaign saw the parties revert to type. But nothing has changed the fact that the Coalition looks set for a narrow win. 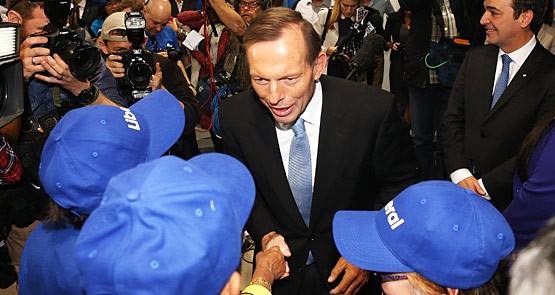 First campaign weeks aren’t particularly useful in telling us how elections will go. Former Labor leader Mark Latham had a good start in 2004. The Howard government hit the ground running in 2007 before it all fell apart. Former PM Julia Gillard had a strong first week in 2010 and looked set to blitz Opposition Leader Tony Abbott. In which case, Prime Minister Kevin Rudd, who has had a reasonable first week, might want to be careful: it could be all downhill from this weekend.

Given my form in predictions, this is a risky venture, but I suspect given the lack of big moments this week, it’s unlikely next week’s polls will show much change: the Coalition will still be ahead, perhaps extending its lead a tad, though not out of Labor’s reach. But the national polls will hide the real story, which are the quite divergent state swings: Labor doing well in Queensland, WA and maybe SA, the Coalition doing well in NSW and Tasmania, probably well enough to clinch a win on September 7, especially given the Coalition has already three seats to the good via New England, Lyne and Fisher. Although, who knows, Liberal Sophie Mirabella might be a surprise loss in Indi, the sort of outcome that would dismay precisely no one in federal politics, particularly her colleagues.

Both sides this week displayed a sort of atavism, perhaps driven by the smell of electoral blood. Labor went for car manufacturing handouts, another $200 million to those transnational car makers who’ve stuck it out in Australia, kept here by a drip-feed of taxpayer dollars. Labor governments are like an ATM for Detroit and Tokyo: pick up the phone, suggest you might reluctantly have to pull out, and the cash flows. Would you like to print a receipt or view your balance on the screen?

And the Coalition went for company tax cuts — well, tax cuts for small and some medium-sized companies, because the rest will have to pay up for Abbott’s paid parental leave policy. One of the remarkable things about Abbott’s leadership has been the tremendous unity of Liberals behind him, and this has even applied to policy dissent: the Liberals and even the Nationals are united in hating the paid parental leave policy, along with business as well. Kudos to whoever noted during the week that if the Greens like your policy more than your fellow Liberals, you’re in strife.

Still, the corporate tax cut was neither here nor there — unlikely to spur any extra investment or create jobs, but certainly not harmful given Australia has a relatively high corporate tax rate — except that the Coalition couldn’t explain how it would be paid for, especially after Deputy Opposition Leader Julie Bishop admitted that the particular savings that Abbott had identified as covering the corporate tax cut involved cuts that were no longer available.

Moreover, Abbott and shadow treasurer Joe Hockey claimed the tax cut would increase revenue over the medium term. This, to quote one of my favourite films, is voodoo bullshit: the Laffer Curve and “tax cuts generate more revenue” has been discredited so often and so thoroughly that it is remarkable that serious politicians still invoke it. As US economist Austan Goolsbee put it, “moon landing was real. Evolution exists. Tax cuts lose revenue. The research has shown this a thousand times. Enough already.”

Then Kevin Rudd wheeled out his first big campaign surprise in former Queensland premier Peter Beattie (is it the last big surprise? paging former Victorian premier Steve Bracks). The intensity of both News Corporation’s attacks and the Coalition’s attacks on Beattie suggest they’re concerned about his capacity to further strengthen Labor in Queensland. Curiously, for all the Coalition attacks, attempts to whip up leadership speculation, etc, etc, they missed the obvious point, and one that I expected would have been made well before now, that the Rudd frontbench will be painfully and perhaps worryingly thin in terms of ministerial experience after the election.

The Rudd story at the start of this campaign was that he’d made Labor competitive again, but not got it into a winning position. Nearly a week in, that remains the case. Abbott, albeit mildly flustered, remains on course for victory.

Disunity was death for a government with a strong record

I think it was unwise and unnecessary for BK to make any predictions at this stage of the game. In fact, those three Lib gains might already be balanced by Brisbane, Forde and Mirabella’s loss. Not to mention the Beattie factor spread around other Brisbane and Queensland electorates.

I have long thought Labor should have recruited Beattie to win back Brisbane from Teresa Gambaro, because he lives in the electorate and it would have been a cert. OTOH, Fiona McNamara will almost certainly win it back for Labor given the feeble margin and the near invisibility of Gambaro–who is a kind of Qld version of Mirabella (entitled); if she was at the recent Teneriffe Festival it was nothing compared to a visitation by King Kevin –just across the waters from his Griffith electorate! (I don’t know if he caught the Bulimba ferry or walked across …)

Incidentally, the fuss or surprise over Beattie should really not be so great. Anyone paying attention would have realised when Heather Beattie was thinking about running for Lord Mayor it signalled the Beatties were not so disengaged from politics after their 5 years sabbatical in the US (notwithstanding owning homes in North Carolina).

Even The Oz reported the grim outlook for Sophie M in today’s paper: “Just quietly, a lot of us want a change,” he (local voter) said. … “I just don’t know what Sophie’s done for the past 11 years. There’s a smugness,” the woman (another voter) said.”

Then there is the usual Liberal conniptions over Melbourne. If they persist with no prefs to Adam Bandt then the seat will either remain Green or go to Labor. Are Lib voters such sheeple as to 100% follow party instructions? Last time 80% of Libs gave their pref to Bandt. It can drop a lot but seems unlikely to go to zero, and even so Bandt has a reasonable chance of retaining his seat from the natural advantage of incumbency.

The coalition will likely win: Rudd’s job is to minimize Abbo’s majority and make sure the Coalition nutters don’t get Senate control.
Unknown is how citizen [American] Rupert’s outrageous antics will impact things. Probably not much especially up here in Queensland where they tolerate anything except blacks. Thinking voters will be appalled but then this recalls Adlai Stevenson’s response to a woman who, after one of his spell-binding speeches told him he’d have the vote of all thinking Americans. “Thank you” he replied “but unfortunately I need a majority”.

To continue my notes on the Commentary page of The Australian:
For at least the third day running (I need to get to a library to check out Mon & Tues), they have run all 5 articles largely hostile, certainly unbalanced, against Labor.

And they are continuing their commentator’s heartfelt advice to Tony Abbott. On Wednesday it was Planet Janet telling her Tony to “loosen up”; Thursday it was Niki Savva saying “Tony, stop the slogans and treat all the folk out there like adults.” Today, incredibly (or maybe not) it is Graham Richardson in one of his more absurd pieces in which he indulges in an overt love-fest for John Howard (“why can’t we bring him back?”)! Niki Savva will be relieved to hear from Richo that Howard has indeed loosened up post defeat: “.. he was far more relaxed and comfortable than he ever was (in office). … he has developed a sense of humour …and has continued growing ever since … Gone is he social awkwardness and the distance he used to put between himself and the rest of the human race …the contrast between him and Tony Abbott was vivid.”

The 5 articles are: 1. Shanahan (say no more); 2. Richardson (say no more); 3. Julie Novak (IPA econo-realist flunky); 4. Ben Jensen (Grattan Inst) and 5. Kevin Donnelly (Edu Standards Institute) these latter two more or less implacable foes of Better Schools (Gonski) and against Federal intervention. (this may be a tad unfair to Jensen but he retains a weird absurdly optimistic belief the 8 states & territories are best placed to improve educational standards–in the face of all evidence.)

“First campaign weeks aren’t particularly useful in telling us how elections will go.”

“Abbott, albeit mildly flustered, remains on course for victory.”

Not my thoughts at all, in fact the polar opposite. I thought Abbott looked shaken (especially with the Beattie announcement) & Joe was nothing but bellicose toward any journo who strayed off the Murdoch question list.

The whole things been flipped on it’s head & the only people who can’t seem to come to terms with it are the media & the opposition.

Fair and balanced, to coin a phrase, and I particularly liked this:

Although, who knows, Liberal Sophie Mirabella might be a surprise loss in Indi, the sort of outcome that would dismay precisely no one in federal politics, particularly her colleagues.