Coke or Pepsi: election campaigns in the age of branding

In an election campaign maligned for few policy differences between the two major parties, political branding has become the new frontier for distinguishing visions amid a war of management speak, three-word slogans and the fight to claim party colours.

Stephen Dann, a senior lecturer in marketing at Australian National University, says Labor and the Coalition are now the political equivalents of Coca-Cola and Pepsi: two long-established products with plenty of advertising capacity but very little difference in substance.

Their rhetorical weapons of choice are the pithy three- or four-word political slogans, which all political parties are employing in this campaign. Prime Minister Kevin Rudd’s recently announced rallying cry is “A new way“, with Labor favourites like “cuts to the bone” continuing to litter press conferences across the country.

For Tony Abbott and the Liberals, it’s “A stronger future” and “A better way“, with the “great big new tax” phrase never far from the memory. Even the newly formed WikiLeaks party was quick to resurrect the “We’ll keep the bastards honest” rallying cry of the Democrats in 1996.

But despite the prevalence of political slogans, advertising guru Jane Caro of Gruen Transfer fame told Crikey that, in reality, few slogans ever make a substantial difference. “Politicians have fallen in love with this idea that slogans are magical solutions. In reality, there are only a handful of political slogans that have really worked; with Gough Whitlam’s ‘It’s Time’ mantra and Barack Obama’s ‘Yes We Can‘ chant being examples.”

Her tempered views are shared by Stephanie Brookes, a senior lecturer in journalism at Monash University, who told Crikey that “if we expect a slogan to ever illuminate an area of policy debate then we’ll be bitterly disappointed — slogans are never a substitute for policy or doing the tough interviews to sell a political vision”. 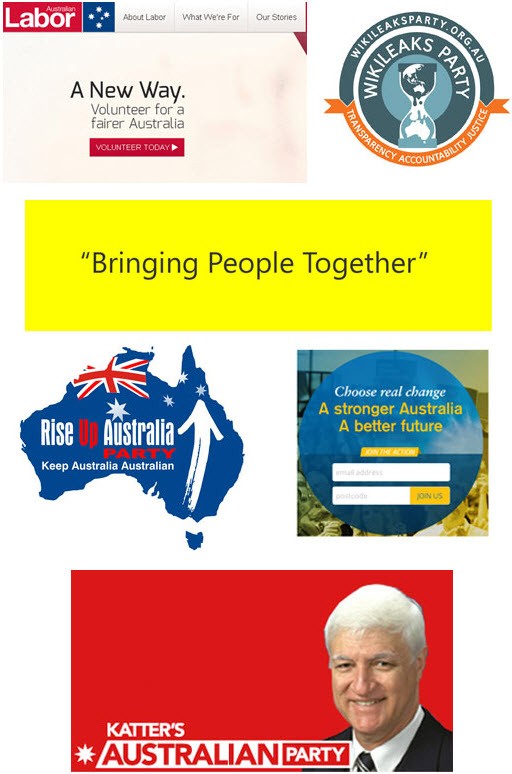 But what does it take to craft a successful slogan these days? According to Dann, the formulation of three-word phrases has little to do with social media despite its much touted influence on the 2013 campaign. That hasn’t stopped Rudd hiring the brains behind Obama’s winning online strategy in 2012, luring the likes of Tim McMahon, Jim Koon and the head of Obama’s “Rapid Response Team” Matthew McGregor — otherwise known as Obama’s “digital attack dog” — who is capable of creating viral spoof videos on short demand.

“Today a slogan needs to fit a banner headline of a major masthead newspaper with a gentle rewrite or limited word substitutions — we’re not yet in the age of the 140-character slogans,” he said. “The #auspol hashtag has come down to being a small group of familiar faces who get retweeted a lot.”

One of those familiar faces is Amy Mullins, a social media professional by day who is known online as “Get Shortened” and the creator of an independent blog on Australian political media. Mullins told Crikey that Abbott is drawn to the traditional press given his unfamiliarity with social media.

“Tony Abbott has struggled to find his voice on social media and as this medium reinforces authenticity and supports transparency and scrutiny, it can be more damaging to struggle with social media under public scrutiny than to just work the media well,” said Mullins.

But Brookes believes the gap between Rudd and Abbott has narrowed on social media in recent years. “Labor may have a slight edge on the Liberals when it comes to social media campaigning but its early days and Tony Abbott is already doing a better job that he was during the 2010 election campaign,” she said.

And while both major parties tailor their slogans for the front pages of daily tabloids and television grabs, or engage in discussion with voters on social media, a new battle is underway with parties seeking to lay claim to colour as political capital. With Wayne Swan retiring his trademark canary yellow from the seat of Lilley this year, Clive Palmer’s Palmer United Party have saturated its branding with the colour and the slogans “Bringing people together” and “Reunite the nation”. Palmer himself is set to contest the seat of Liley this year.

“Colour has always been an important part of political branding, but especially so this election campaign,” said Dann. “It’s getting to the point where the two major parties now act alike, sound alike, and judging by their use of colour on political pamphlets look alike.”

Labor’s efforts to rebrand under Rudd have also resulted in a shift of colour palettes. “‘A New Way’ means new visuals with Labor moving away from solid red, white and blue that represent the traditional ALP brand,” said Mullins. “Instead Labor have used softer variants on their core colour scheme with cream, crimson red and a deeper navy in a gradated arrow symbol with retro cues.”

Even the political branding of the Liberal Party has adopted yellow in its political advertisements of late, a distinct change from the traditional navy blue associated with the party (or even their choice of neckties).

Of course, these face value changes make little if any difference to electoral results should political parties fail to present costed policies to the public or outline a political vision. Indeed there’s a risk that our politicians are missing the simple tenets of communication.

“The best branding is always based on truth,” said Caro. “At the moment the major parties are slavishly following a set of marketing guidelines without having the slightest clue what they really mean.”

“The best branding is always based on truth,” said Jane Caro of Gruen Transfer fame. While that is easy to accept at face value. Australian voters like me are dealing with a political contest between the “two parties not much preferred” We can see Labor which is damaged almost beyond belief by all those political sins it has accommodated. Now doing whatever it takes to simply get re elected again. They know they only need to present as viable till polling day and then they can revert to form. I worry that those unauthorized political material on the front pages of News Corpse papers may in fact be attracting mindless sympathy votes. Edward James