WHO WON THE DAY ON THURSDAY?

Bernard Keane, Crikey Canberra correspondent: Judging by the ferocious Coalition and News Ltd attacks on Peter Beattie, Kevin Rudd handily won it in unveiling his candidate for Forde. Abbott was in Tasmania for some retail politics, hoping to lock in the one to two seats all expect the Liberals to pick up in the Apple Isle, but all eyes were a far way to the north.

Natasha Stott Despoja, former leader of the Democrats: Yesterday’s winner: Kevin Rudd. Rudd could’ve won on surprise factor alone. Securing Peter Beattie for the seat of Forde was a coup and handled stealthily. Regardless of Beattie’s electoral appeal, it also represents a significant burying of the hatchet! It was hard for the Coalition to get a look in yesterday as a result.

Kerry Chikarovski, former NSW Liberal leader, lobbyist and media commentator: Clearly Kevin Rudd thinks bringing in Peter Beattie is a coup and I think he would’ve been disappointed that it didn’t give him the bounce in the polls he expected. Abbott would have been pleased with the fact that this didn’t happen. In some ways, the Beattie story was a distraction from the campaign because it became a bit of sideshow. While Mr Rudd would think he won the day, in reality it’s pretty even.

Nick Economou, senior lecturer in the School of Political and Social Inquiry, Monash University: I wonder how many more Labor dinosaurs are going to be resurrected to save Labor’s campaign? Kevin Rudd is winning the battle of the hoopla but the Coalition is still marginally in front when it comes to policy. So the Coalition are still ahead, but Labor’s still in the game. I give yesterday to Rudd because of the Beattie factor.

The Liberals have promised cash incentives for Tasmanian businesses who hire unemployed job seekers, while Labor continues to announce funding promises for science and infrastructure projects …

Kevin Rudd: The Prime Minister began his day with a live interview with Channel Seven’s Sunrise, in which he presented departing presenter Mel Doyle with flowers. Rudd then visited Langwarrin Park Primary School in the marginal electoral of Dunkley on Melbourne’s Mornington Peninsula, a seat currently held by Liberal Bruce Billson. Rudd’s widely tipped to visit the Laura Smyth’s electoral of Latrobe this afternoon.

Tony Abbott: After setting out for an early morning bike ride clad in lycra, the Opposition Leader took his campaign road show to Brisbane’s famed Ekka. Abbott attended the show with his wife Margie and a press pack eagerly awaiting photo opportunities of the Liberal leader with showbags, babies and farm animals. Abbott also awarded a blue ribbon to a junior handler’s heifer named Fairy, before announcing a judicial inquiry into Labor’s insulation program while standing in front of an enormous pile of insulation.

Christine Milne: The Greens leader is in Hobart again today where she’ll be holding a joint press conference with Senator Peter Whish-Wilson calling for an end to shale gas exploration in Tasmania. She’s scheduled to depart for Melbourne tomorrow where she’ll be attending the Victorian campaign launch and meeting voters in Adam Bandt’s electorate.

Its hard to go past Family First Senate Candidate Henry Heng’s amateur campaign video, which has resurfaced in the news today — a coup for all Henrys nationwide … 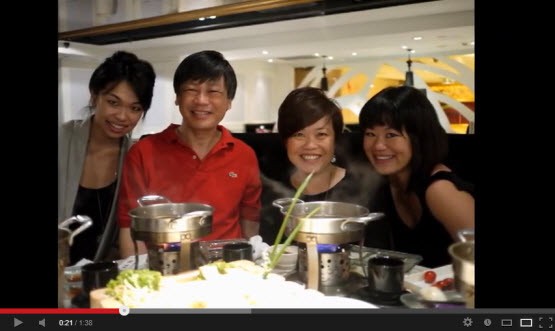 Labor heavyweights are back in Rooty Hill today. This time Foreign Minister Bob Carr joins Frontbencher Ed Husic to celebrate the end of Eid at a local mosque … 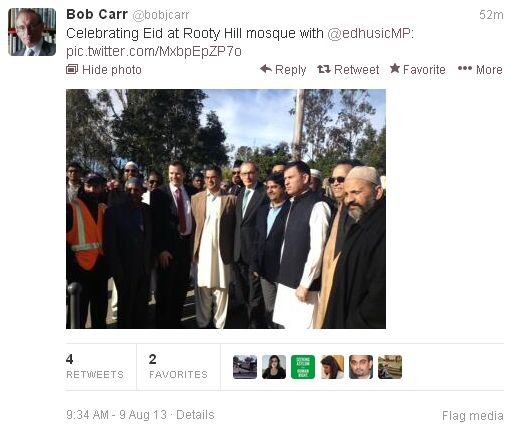 “Kerry Chikarovski, former NSW Liberal leader, lobbyist and media commentator:” Say no more.
Kerry thinks that Kev’s resucttation of Beattie “…didn’t give him the bounce in the polls he expected.” How relable must be these “polls” taken over the last 15 hour or so? “While Mr Rudd would think he won the day, in reality it’s pretty even.” How often what we think is determined by our own predtermined worldview, ah Kerry?

Nick Economou, senior lecturer in the School of Political and Social Inquiry, Monash University: Should know better. “….but the Coalition is still marginally in front when it comes to policy.” By my count, they’ve only released one policy.

If the Coalition is “in front when it comes to policy”, I am clearly living in a parallel universe to Mr Economou! ‘Stop the boats’, ‘direct (read “simple-minded”) action on climate change’, an unaffordable & inequitable paid parental leave scheme, NBN-lite (for the well-off) via the dodgy copper network, and cuts to company tax, are the policy highlights of the Coalition. It should be a no-brainer. However, in our Murdoch-charged dystopia these awful policies are supposedly solid grounds for getting rid of Labor. Anywhere else (apart from perhaps the US) Labor would be a shew in…

The only policy they have is no policy – or contradictions or just plain “me too” Labor achievements. The “shoo it in Party” now expects to be elected by personal vilification to produce an odium of a lack of democratic processes. A bit Mugabish if you ask me – a party run by Rupert – look what happened in the UK when politicians get involved to deeply and sell their ethics to the commercial interests of News Corporation. Does Abbott want to become another Cameron? Eddie Obied and Rupert have a lot in common.