The Daily Telegraph's joke front page references a TV series that finished its run more than 42 years ago. Plus other media bites from the campaign.

Campaign reading: old men of the Sydney Tele. Most readers of The Daily Telegraph this morning must have wondered what this was all about: 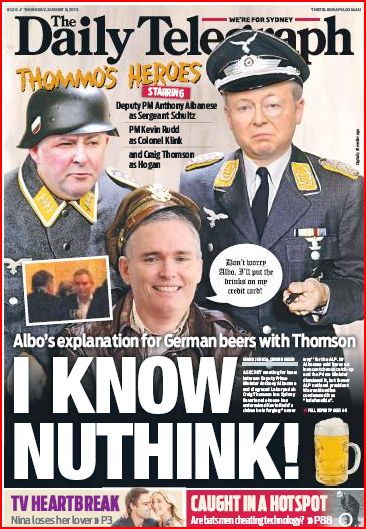 Hogan’s Heroes, the television program the attempt at humour was based on, finished its run on American television back in March 1971 — more than 42 years ago. This probably explains why on an inside the paper page felt the need to explain where the “I know nuthink” saying of Sergeant Schultz came from. That minority of us old enough actually to have seen the program might find a  variation on this excerpt from an episode quite appropriate:

Newkirk after Hogan announced one of his bizarre plans: “The colonel’s gone over the edge.”
Kinchloe: “What is this, a frufru festival?”
LeBeau to Kinch: “Next time you radio London, tell them we need a psychiatrist.”

Simon Benson and Gemma Jones seem to think being part of a comic book approach to politics is clever. Negative points for both of them on the Crikey best political journalist table.

Jessica Irvine is one News Corp tabloid writer who manages to stick to matters of substance as her contribution “Which party can you trust to run the economy? Hint: neither” this morning shows. Some evenly distributed and well-deserved criticism of both Labor and the Coalition economic policies.

“Truth has become the first casualty of a political war” — Mark Kenny in The Sydney Morning Herald explains how outright lies are par for the course during this campaign:

“Three big ones are doing the rounds already: one, the budget bottom line and the missing $70 billion from Coalition accounting; two, the real and political dimensions of the latest interest rate cut; and three, Abbott’s alleged plans to increase the GST.”

“Rudd cuddles Abbott on policy” — Niki Savva in The Australian writes that, if  Prime Minister Kevin Rudd and Opposition Leader Tony Abbott continue to indulge in the policy equivalent of spooning, voters will have little option but to look more closely at the character of the two contenders before they cast their vote.

“Icky as it is to imagine, unlikely as it might have once been to contemplate, these two have become strange bedfellows, cuddling up as close as they can on key issues, making it near impossible for voters to see what separates them, or where one begins and the other ends. Rudd has lurched right on asylum-seekers and embraced the surplus imperative, Abbott has caved in on industrial relations and education.

“To some extent they have succeeded in neutralising their own negatives and minimising their opponents’ advantages.”

Quite a rare beast in election coverage, “Drop-off in boat arrivals” by Bianca Hall and David Wroe in the Fairfax papers is based on actual, real news.

“Tough policies preventing settlement in Australia appear to be deterring asylum seekers, with signs of boat arrivals tapering off and reports of people demanding refunds from people smugglers.”

In that same “real news” category is Gabrielle Chan’s “Anna Burke’s off-message joke is a political lesson in authenticity” on The Guardian’s Australian site. How refreshing to read a yarn about a politician actually prepared to speak her mind about refugee policy, like the House of Representatives Speaker was at an electorate function, and then not claim to have been misreported when it reached a wider audience. Today’s scoreboard … 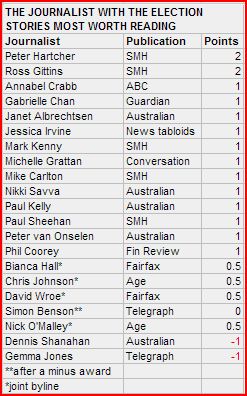 Campaign listening: ABC 936 Hobart. As an old Hobart smart youth — (the description comes from the late Ian Fitchett, who after someone told him years ago I was a smart new addition to the press gallery replied “Smart? Huh. Hobart smart. That’s all”) — I should have known better. I chose the the Tasmanian station for my morning listening because Abbott was in the state and I thought that might present an interesting snippet or two. Silly boy. The Opposition Leader was up north in Launceston, and down south in the capital that meant it was a subject barely worth mentioning.

So it is that I am now fully briefed by Jo Spargo, filling in for the normal breakfast presenter, on the model train exhibition coming up at the weekend where you can actually get to ride on one of the models. Offspring’s Patrick is dead. And the bandicoots on the reserve at Austin’s Ferry are in a bad way because of attacks by cats and dogs, and they are making oil from avocados somewhere or other, and the big question on everyone’s lips is what name will be given to the replacement Antarctic vessel Aurora Australis.

Of political things? Well Environment Minister Mark Butler will be in town today to announce details of the tender for that Antarctic ship. The extension for another five years of a $1.6 million or so annual grant to the Caring for our Country program, which will enable work to continue on threatened species of flora and fauna, was warmly welcomed by the recipients. But of the Abbott endeavours to help the Liberals win back those northern seats of Bass and Braddon, only a cursory mention on the half-hourly news bulletins.

Still, there were two swags of the nationally broadcast AM program with its talk of campaigning on the economy being set to dominate the day. And that was probably boring enough to make most Hobart listeners thankful for the succession of talkback callers giving details of their own favourite train travels.

Other views: blogs and tweets of note. A selection of views from the blogs, social media, comments on Crikey stories and letters to the editor. From Facebook:

From Hobart’s The Mercury: 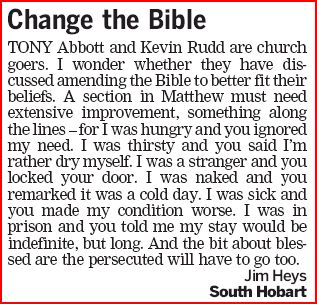 From The Sydney Morning Herald: 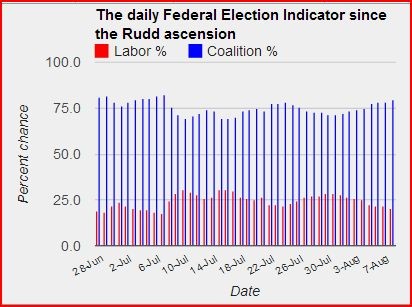 Perhaps you prefer something more scientific that predicts the future. Well, The Advertiser this morning obliged. 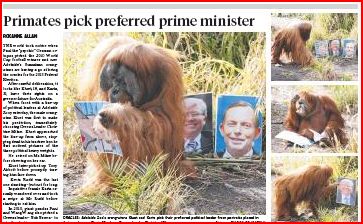 Greens Leader Christine Milne was the first choice of male orangutan Kluet, who later picked up Tony Abbott before tossing him to the ground. The inquisitive female Karta casually wandered over and took a swipe at Kevin Rudd before starting to eat him.

I strongly suspect Ross Gittens will end up with the most points and Gemma Jones the least.

This is the Murdoch press engaging in self-parody.

The Daily Telegraph is leaving itself nowhere to go with this sensationalist dreck so early in the campaign.

Very few can do comedy and journalism – this proves how so many can do neither.