Exchange rates continue to fall, but there are signs of economic recovery in the United Kingdom. 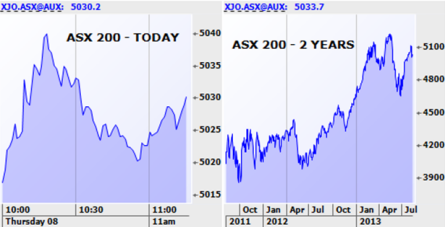 The UK took a bit of a dive (down 1.41%) on the Bank of England inflation letter which said that it would keep interest rates on hold until unemployment dropped below 7.0%. The interpretation of that is that it is seeing an improving unemployment trend, seeing the green shoots of recovery and that interest rates will rise sooner than expected. On the back of that the GBP rose — talk of  lifting rates next year.

Resources quiet with BHP down 0.36% and RIO up 0.17% in the US with BHP closing at the equivalent of 15c up on its close in Australia yesterday.