There seems to e some confusion at News Corp as to just what percentage of Australia's newspapers it owns.

News Corp’s newspaper dominance. Just how much of the Australian newspaper landscape does Rupert Murdoch’s News Corp control? In a statement issued in Sydney it said:

But in a May 24 filing with the SEC in the US updating progress on the separation of News Corp from 21st Century Fox, the company said this:

“In Australia, our daily, Sunday, weekly and bi-weekly newspapers account for more than 63% of the total circulation of newspapers in Australia.”

So is it 63% or 59%? Either way, it’s still more than half, and the group is clearly the dominant newspaper group in the country. And while News went on to point out that all of this ignores television, radio and the myriad online news sources, News also ignored the fact that it has a stake in that area as well — not as dominant as print, but a sizeable presence. And, by the way, that May 24 filing with the SEC also revealed the impending write-down in the value of the Australian newspapers:

“On May 24, 2013, New News Corporation concluded that certain of its goodwill and intangible assets were potentially impaired and that it expects to record a pre-tax non-cash impairment charge in the range of $1.2 billion to $1.4 billion in the quarter ending June 30, 2013 related to its News and Information Services segment … New News Corporation adjusted its future outlook and related strategy principally with respect to the News and Information Services business in Australia … As a result, New News Corporation determined that the fair value of these reporting units declined below their respective carrying values and expects to record an impairment charge in the quarter ending June 30, 2013. Additionally, goodwill and intangible assets in the News and Information Services segment continue to be at risk for future impairment.”

Rundle: the parody genius of ‘Nick Cater’. For years The Guardian ran a column by one Bel Littlejohn, a distillation of the worst of the Left-liberal prejudices of the Grauniad audience. Australian visitors found it hilarious — especially after one had quietly explained that it was a parody, the work of Private Eye superstar Craig Brown. Now, I don’t know who’s doing this Nick Cater character at News Corp, but they’ve got the makings of an award-winning comedy festival character right there.

For years we’ve wondered how you parody the pose taken by right-wing insiders, that they represent the voice of the people against some mysterious left-wing elite. Whoever’s writing the “Nick Cater” columns has nailed it –the writer has made him purportedly an executive editor of a company that controls wads of Australia newsprint, and then made his one argument that “gatekeepers” are controlling the culture and leaving people of his views without a voice. In recent times, the gag was taken once stage higher when a whole book by “Cater” complaining of this exclusion was put out by the publisher owned by the guy who owns 70% of Australian newsprint, and who employs “Cater” and others to run it. Ern Malley had nothing on that little episode.

I didn’t think the “Cater”-ers could top that, but Tuesday’s piece did the trick. “Cater” is horrified that inner-city seats contain more journalists than plumbers. Yes, bizarre. Plumbers are evenly spread across cities because plumbing tends to be. What possible reason could there be for people who work in Surry Hills, Docklands, Ultimo and Spencer Street to tend to live closer in? Easier access to chai and sodomy, presumably. Journos, this argument goes, live in a narrow inner-city belt so far to the Left of the general population as to be off the scale. “Cater” then goes to the figures:

“Consider a hypothetical election in a country we will call Media Land, which consists of the 29 federal parliamentary seats where half of Australia’s 75,000 media professionals lived in 2011. The Coalition is in government in Media Land with 15 seats; Labor holds 13 and the Greens one.”

Yeah you read that right. “Cater’s” attempt to prove that “Media Land” is Left-shifted founders on his own mathematical evidence that in 2011 it went for the Coalition 53%-47%, when the country went for Labor 50.1%-49.9% in 2010. How to square this circle? Pose a hypothetical. — Guy Rundle (read the full story here)

Exclusive watch. The Australian has no fewer than six “exclusive” dinkuses on its front page today, with every single story branded as the sole domain of the Oz … 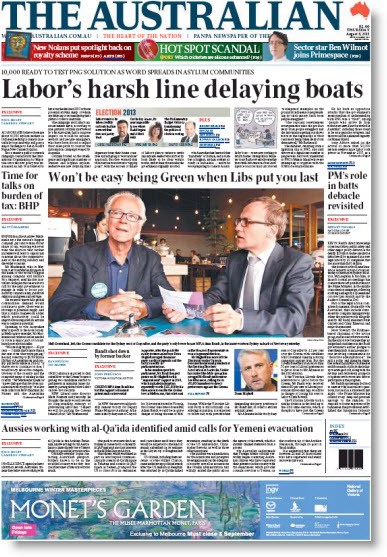 Among its front-page scoops is a story saying the Coalition is expected to preference the Greens, not Labor, last in the Sydney seat of Grayndler and in Melbourne, which would cost sitting Greens Melbourne member Adam Bandt his seat. That preference order had been suggested in both The Age and Crikey in early July. Also, the revelation that BHP Billiton chief executive Andrew Mackenzie thinks the company pays too much tax. In his first public appearance since taking over the big chair from Marius Kloppers in May, Mackenzie addressed the Asia Society in Melbourne yesterday, a speech covered by The Age, the Herald Sun and the ABC, among others. Every outlet mentioned Mackenzie’s aversion to tax.

All in all 16 stories in the Oz today had the branding. The Sydney Morning Herald had just one story marked “exclusive” today, on a story from a Labor source questioning the maths behind the Coalition’s tax cut plan. The Daily Telegraph has two “exclusives”, one showcasing an artist’s impression of James Packer’s planned hotel at Barangaroo, and the other about a mother charged with creating child abuse material relating to photos of her daughters. The Herald Sun has one “exclusive”, a story about clemency for drivers caught out by speed cameras. — Cassidy Knowlton

Help wanted at the Sun on Sunday. Believe it or not, reports in the UK press say News UK (owned by the struggling News Corp) has decided to employ 16 extra journalists on the Sun on Sunday, which Murdoch started as a low-cost replacement for News of the World, which was killed off to try to halt the stench surrounding News and the Murdochs from the phone-hacking scandal.

Guardian blogger Roy Greenslade called it an “interesting move” that was “partial recognition that the seven-day operation has not worked out as hoped. The Sunday issue is lack-lustre, as its consistent sales decline has indicated.” As Crikey has pointed out several times this year, while it is still the biggest-selling Sunday paper in the UK, it has also recorded the largest fall in its sales — from 3.2 million for its first edition in February of last year and a 2.462 million average for March 2012, the paper’s sales have plunged to an average 1.875 million in June, down more than 550,000 copies or close to 23%.

The paper is priced at 60p, well under the one pound cost of tabloid Sundays such as the Sunday Mirror. The first move by Murdoch was to change editors at The Sun from Dominic Mohan to David Dinsmore back in June. Now more money is going to be thrown at the paper to try to lift its content and make the paper more lively and interesting (or as Greenslade nicely put it, to be like News of the World without being News of the World). That’s just what Allan was supposedly brought back to Australia to inject into the News Corp Australia papers, especially the Sundays. — Glenn Dyer

Dandenong Journal sold. Having recently closed six out of the seven newspapers in its eastern division, Antony Catalano’s MMP Group (part-owned by Fairfax) has just finished the clean sweep, selling the 148-year-old Dandenong Journal to independent suburban newspaper chain Star News Group. In an email sent to staff this morning and obtained by Crikey, Catalano announced the sale and said the group was “very pleased with the price we received”. Although the sale price has yet to be disclosed, insiders say the Journal was quite profitable, and MMP secured a good price for it.

The closure of the previous seven papers resulted in 32 redundancies, but this sale will not add to the toll. All seven of the Journal staff will move to the Star group, which owns 27 other community newspapers, including potential competitor the Dandenong Star. Whether the Journal and the Star will be consolidated has yet to be discussed. — Cassidy Knowlton

Dinkus watch: muzzle the bullets. The Daily Telegraph has two new — and quite bizarre — dinkuses. The first, “Muzzle the mutts”, appears on page two and is related to a toddler killed by a dog on the weekend. The second is on gun violence and appears on a story about the sentencing of a man who had shot a woman in the head. The cartoon dinkus “Bite the bullet Barry” appears as an entreaty to NSW Premier Barry O’Farrell to tighten gun laws …

The view from Murdoch’s Gated Community – they won’t be almost satisfied ’til they control 100% of that flow.