How the parties trick you into handing over personal information

The major parties are fooling people into handing over personal information in the guise of applications for a postal vote. Here's how the ruse works -- and how to avoid it.

You receive an official-looking envelope in the mail containing an application form for a postal vote. You fill it out and use the reply-paid envelope to send the form back to an official-looking address. You’ve just dealt with the Australian Electoral Commission, right?

Wrong. You’ve just dealt with a political party that is harvesting your personal details for its database.

You’ve just told the Liberal Party or the Labor Party your name, date of birth, mobile phone number, email address, enrolled address, postal address, where you were born and who your first employer was, and you’ve given the party your signature.

And you probably don’t even know it — because there’s nothing on that reply-paid envelope to indicate that you’re sending it to a political party (although there will be some advertising material from a candidate contained in the letter).

You’d like to see what personal information political parties have filed on you? You can’t. Parties are exempt under the Privacy Act; you have no right to access your file.

Next, the political party — which might use tracking systems to work out whether you’re likely to vote for it — is supposed to send the form on to the Australian Electoral Commission (it’s an offence under section 197 of the Electoral Act not to). But it might just sit on your form a for a while, perhaps long enough that you never get that postal ballot paper (the Electoral Act prohibits stockpiling, but studies indicate it takes place). And party officials might “correct” details on your application form before sending it on (that’s happened before).

Crikey investigated the postal vote system after receiving many emails from concerned readers in response to Tips and Rumours yesterday. Readers sent us the postal vote forms they’d received from the Liberals and the ALP right around the country — from Labor candidates Kevin Rudd and Cath Bowtell, and from Coalition candidates Bob Baldwin, Teresa Gambaro, Luke Howard, Bill Glasson, Josh Frydenberg, Jag Chugha, Greg Bickley, Sean Armistead and Peter Hendy. And it works; almost 200,000 voters sent the forms back to the political parties at the 2010 federal election. 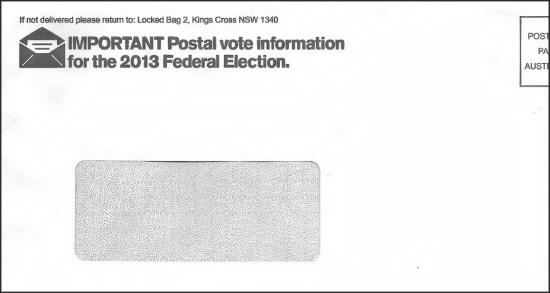 And the return, “reply paid” envelope enclosed looks something like this — nothing to indicate this one goes straight to the Liberal Party:

Independent Senator Nick Xenophon, who has criticised the postal vote rules previously, told Crikey “there’s got to be a better way of doing this”.

“There needs to be reform … the reason I’m concerned is because I don’t know whether an individual political party should have that level of information. I don’t think the information should be warehoused [by the parties],” he said. Xenophon called for the rules to be changed so that completed forms had to be sent straight to the AEC.

The Rudd Labor government tried to change the rules in 2010, proposing that forms had to be returned to the AEC directly and prohibiting written material (i.e. political advertising) being sent alongside the forms. The Coalition opposed those changes, and watered-down amendments were passed instead.

The AEC has repeatedly asked for the rules to be changed, to no avail. A spokesman told Crikey the matter was one for Parliament. “It is legislated, it’s something that they are allowed to do,” he said. A spokesman for the AEC in NSW urged people with concerns to apply for a postal vote with the AEC directly; “register online through our website, that way you know your postal vote will go through our system,” he said. The link is here.

As for Crikey readers who are concerned at the practices of the major parties when it comes to postal votes and personal information– you have a reply-paid envelope addressed to a major party. Why not use it to tell them what you think?

An excellent and informative article. I haven’t received mine yet. When I do I will indeed tell them what I think of them.

Just got one from John Alexander (LNP Bennelong). Thanks for pointing this out Crikey. I’m really annoyed at this nonsense.

Nick Xenophon reckons there’s got to be a better way to do this? If there was, don’t you reckon they would have schemed it?
What we need is an “honest” way?

Mine came from Kelly O’Dwyer (Liberal, Higgins). It went straight into the recycle bin.