Crikey asks the sharpest political commentators which leader got the best of the campaigning day yesterday, plus we track where the leaders are and what cash promises they've made …

Bernard Keane, Crikey Canberra correspondent: The Coalition fired one of their big guns yesterday, with the corporate tax announcement, but whether that’s likely to excite voters is unclear — particularly given there was no explanation, beyond voodoo economics, of how it would be paid for. The lingering GST non-issue continued to haunt the Coalition as well. Meanwhile the PM was flogging his outside school hours care funding in Sydney i.e. the Coalition was being strategic while Rudd was doing retail. His 7.30 appearance, though, did him no favours. A narrow win to Labor, especially with the dodged bullet of the High Court win on the mining tax.

Richard Farmer, Crikey election analyst: A Coalition win on the day but not as clear cut as a supposed $5 billion cut in taxes should have delivered. For a start the money is promised to companies not voters and “what about me” is a powerful cry when it comes to handing out dollars. And then there’s the little matter to come over the next few weeks of “where’s the money coming from?” That’s always a difficult question for oppositions to answer during a campaign and Rudd would do well to have another of his chats with Paul Keating and get a briefing on how to do it as effectively as he did when treasurer.

Professor Clement Macintyre, head of History and Politics at the University of Adelaide: Yesterday the Liberals announced a cut to company tax of 1.5%. This will play well to their core constituency group and will go some way to offsetting concerns over the funding arrangements for their proposed paid parental leave policy. It is a neat solution. The tax rate for large companies won’t move, but the Liberals are promising some relief for small business. It is early days in the 2013 election campaign, but from the outset, economic management has been the main issue. With this initiative the opposition has generated good headlines and eased fears about one of its more contentious policies, so score that as an early win for the Coalition.

Ben Eltham, political correspondent for New Matilda: The Coalition’s company tax cut was widely covered yesterday, but I think it’ll actually be a negative for the Coalition. I don’t think cutting company taxes is popular in the general electorate and I think it will be a net negative for the Coalition. I don’t think that will necessarily play well for them. So I gave yesterday slightly to Labor, even though they didn’t do much.

The Coalition has made no cash promises since we brought you yesterday’s Cash Tracker. Labor made the following promises:

Kevin Rudd: He’s zipping all over the east coast today, with an extra campaign stop booked in following the unexpected news of Peter Beattie returning to federal politics. He started in Sydney, before flying to Brisbane to confirm Beattie’s candidancy. Later this afternoon he’ll be in Victoria, visiting some must-win marginal seats. Unfortunately his media pack got stuck in Sydney after their plane broke down.

Tony Abbott: He’s in Tasmania to focus on the state’s economy, calling for it to be made a “special economic zone” to boost growth. He will also reportedly visit the electorates of Bass and Braddon, including a car dealership in Launceston.

Christine Milne: The Greens leader will also be travelling around the Apple Isle today. She’ll be holding a press conference looking into the issues of the day and in particular Abbott’s announcements on Tasmania. This evening she will be launching the Greens National Food Policy online.

Every day Crikey is finding a funny, awkward or poignant moment from the previous day’s campaigning. We can’t go past Seven News’ exclusive interview with the One Nation candidate for Rankin. It set Twitter alight and justifiably so … 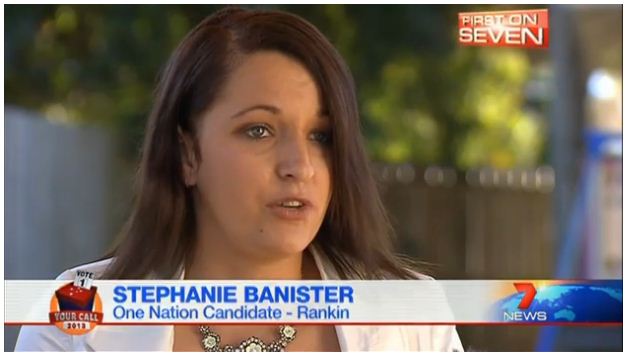 Everyone was abuzz with the news that Beattie would be seeking to plunge into federal politics. But it was up to political commentator Greg Jericho to remind us of his previous career … 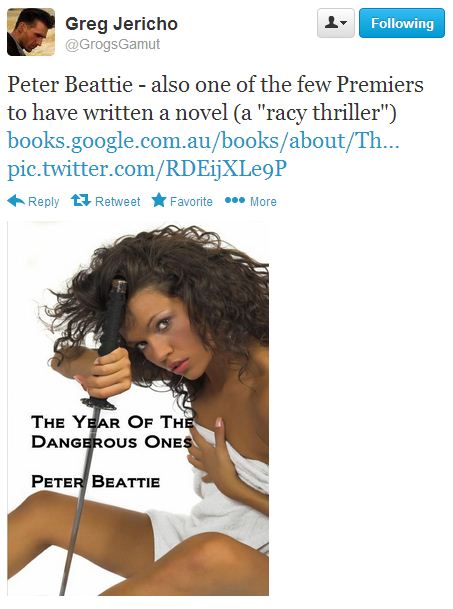 Is the company tax cut nullified by the Paid Parental leave scheme levy? Still a win for parents though.