Among the fibros and McMansions, Blacktown’s diverse voice

Blacktown is a city without a centre, an important voice in the federal election that is actually many. Crikey's writer-at-large ventured west into the sprawl, where it still feels like the 1970s. 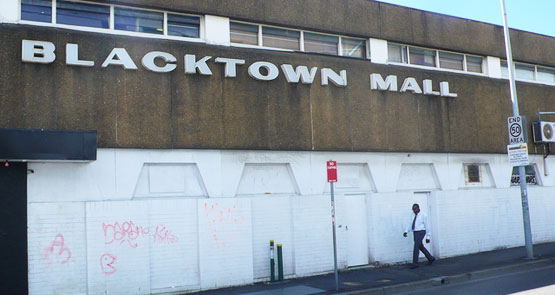 Christ almighty, Blacktown is a dump. Two huge intersecting shopping malls ranged around a car park and a square vacant lot, a couple of brick veneer terraces of shops climbing the hills, and a stupid and artless train station plonked in the middle. There was a town here once, as evidenced by a single red brick church in the middle that has escaped the carnage, now framed between featureless slab-tilt walls. The streets it looked over, the town centre, has long since disappeared beneath the mega-retail carve-up, place giving way to zoning. The American disease, though not as bad, and with one difference: the place is teeming.

Remind yourself to try to notice what you wouldn’t notice. Like how the mix changes as you head on the train out of Central, class first then ethnic, the suits peeling away from the start, then fast, around Strathfield, then a lot of the Anglos start to go, until at Blacktown, it’s not some old Anglo city with a few add-ons any more, it’s a Third World metropolis floated free and come up the river, everyone threading through and between each other, Asians in tan slacks, whites in Lowe’s workwear finest, slender African and Aboriginal kids. Too obvious to mention, too obvious not to mention. The station feeds into the mall, Westpoint, two kids in three jump the barriers. There’s a hinterland with pointless decking and municipal sculpture that someone somewhere at some time must have thought improving but simply adds to the clutter.

It’s lively as hell, it’s a living city, and it’s the gateway to the golden outer west, the half-dozen-or-so seats the election may or may not turn on: Labor ultra-marginals Greenway and Lindsay stretching to the hills, Liberal hold Macquarie out to the Hawkesbury, Reid (Labor), and the Libs’ Macarthur and Bennelong on around a 3% swing — and should Labor slip and fall, Parramatta, at a 4.5% swing, would go too, and the heart of old working-class Sydney would be blue in a vast crescent from the north coast round to Botany Bay.

Blacktown has a workers club of such vast scope and power that its website is simply “workersclub“; it is Sikh central, and Little Manila. Around it constellates the largest Aboriginal population in the country, all but invisible to the media; northwards there’s the Ponds, McMansionburg nestled in its own co-opted ecosystem, and then beyond stretches Jesusland, the hills where, in 1959, Billy Graham came and lay down his cloak for four months, virtually founding a new community. Now Hillsong is there, plain tabernacle welcoming all, and headquarters of a global mega-church, with a lot of supporters and a lot of interests.

It’s the afternoon of the second day of the election when I went up there, and I swore I wouldn’t write about it, couldn’t, the way I would an American city. What is to explain to people about their own country? But then, let’s face it, we don’t all live in one country. Blacktown is Dandenong in a way, but also it isn’t, and it sure as hell isn’t Darlinghurst or Newtown or even Petersham. Sydney sprawls so far, so vast, and in one direction, so that 20 kilometres out, the harbour is mere rumour for hundreds of thousands, nothing to do with them, not where they are. Queensland aside, we’re a continent of city-states with vast hinterlands, joined in federation by an arrangement that sometimes feels like a treaty between principalities, whatever obeisances we may make towards a larger identity.

“… it looks like 1978, part of a vast corridor that has been underdeveloped for so long that people have become accustomed to it.”

So if Labor loses here, while it swings back towards them elsewhere, it will be because of Eddie Obeid — and you could throw a brick anywhere west of Broken Hill and never hit anyone who’d heard of him until six months ago. I must have been through Blacktown once or twice, maybe never, why would I? Like most people not from here, Sydney disappears when you can’t feel the breeze any more, the world ends where the fibros start. But somewhere in a room here, some community peak body will decide which way its members will swing their votes, and that may swing the election too. Perhaps that whole business had already yielded its first result, as first Australia and then the world saw Greenway Liberal candidate Jaymes Diaz, a Filipino-Australian candidate, melt down — when asked to name any of the six points in the Coalition’s boats plan, which he was clutching to his crisp, white shirt — and flail so badly that he eventually had to be led away gibbering by his minders.

Head office had moved heaven and earth to head off his constituency and gained a charge of racism for their troubles. But Diaz’s support was anchored in Little Manila — OK, that’s about three shops in Blacktown, but sounds cooler, yeah — and he’s gained a big slice of the Christian vote, and was unshakeable. The papers lying in piles unread in the newsagents, swollen with pages of policy minutiae, treated Diaz as if he’d just dropped down from the moon, as if he did not represent an intersection of political and cultural forces. Blacktown, in all its roiling dinge, seemed to suggest otherwise. The city lived outside and beyond the talk about it.

Quite possibly I was a little grumpy. I’d flown back in barely 48 hours earlier via Doha and Kuala Lumpar, 21st-century cities reaching towards the sky, albeit on the back of, erm, slave labour. Then there was Sydney Airport, and while I loathe airportage as much as anyone, there’s nowhere else that captures the essence of a state so perfectly. At SYD, that involved choosing between equally overpriced and variably ineffective mobile broadband options, a terminal shuttle bus that charges five bucks a ticket for a SHUTTLE BUS BETWEEN TERMINALS and that does not stop at terminal three, because Qantas won’t let it. Indeed, there was no signage for terminal three at all, and it could only be accessed via a winding trail through the long-stay car park.

What sort of airport hides a whole terminal? The same one, run by a vast financial conglomerate, that charges for terminal transfer. The same type of conglomerate that bilks for broadband access the standard of a coat-hanger aerial. It’s the baseline condition of Australia today, so vast and expansive that one only notices it at the borders — that the place is run for an interlocking set of major media, comms, mining, etc, corps, that they see the country’s citizenship as a customer base, that they set the rules, and a fair bit of that is to do with why the country has become a sinkhole for disguised inflation, and the graveyard of real productive and social development.

That probably gave Blacktown a slightly jaundiced cast. Because, really, this is a city of half-a-million people, disguised within the wider mesh of Sydney. It should have skyscrapers, plazas, focused design, be at the centre of areas of whole new industries and synergies. And yet it looks like 1978, part of a vast corridor that has been underdeveloped for so long that people have become accustomed to it. And it was only that afternoon, with the interest rate cut, that talk came round to the what we had actually been doing for the last decade or so. In the mediasphere at least.

What they think beyond Blacktown, among the fibros and McMansions, the hills and ponds, is something we’ll find out.

* Photograph of Blacktown by Laura Appleyard.

Gary, thank you for your insightful report from a voter who lives next door to the Blacktown. You missed the other part of Mr Diaz’s incompetant reply to the reporter, and that was the comment about the LNP’s environmental plan, I laughed and laughed at such an incompetant bogan and learned it concerns “planting real tree’s” as against plastic tree’s?
Full marks to Channel 10 reporter for hammering home his questions (for once).
And this idiot is representing his community in the parliament…god help us all, and the planet!

Ah welcome back Guy. Please don’t be shy about describing outer Oz suburbs in that special way, that you did so well in America.
It really *is* refreshing to see them through new eyes.
I’m looking forward to your adventures a lot more than the dreaded MSM muck that passes for commentary.

Pro Tip: There is an underground travelator that takes you between T2 and T3. Both T2 and T3 share a railway station, so just follow the signs to the station, then ignore the station entrance, and continue on towards the other terminal.

Mr.Rundle, wonderful stuff. To think our “town planners” have aimed so low to the American templated urban blights, with the coup de grace delivered by traffic engineers. Surely the World Court beckons these so called professional for crimes against humanity.

“The papers lying in piles ….” – that would be the Tele-trash?