Who to believe? Dennis Shanahan or Paul Kelly? Our man sorts out the commentators of The Australian along with his daily look at the rest of the campaign media.

Campaign reading: choose your commentator and take your choice. It is, as they say, difference of opinion that makes a horse race. So too an interesting newspaper as The Australian proved this morning. On page one Dennis Shanahan, under the headline “ALP fears as campaign wobbles“, claims senior ALP figures have told the paper there remains an intense dislike towards Kevin Rudd despite Labor’s rise in the polls since his removal of Julia Gillard five weeks ago. The view is that his campaign has not started well and is losing momentum:

“The senior Labor figures, who supported Ms Gillard as leader, also claim voter satisfaction with Mr Rudd in polling in marginal seats the ALP must win to hold government is only neutral or negative.”

Turn over to the editorial pages and Paul Kelly gives quite a different take on Rudd’s popularity or lack of it with his “PM’s audacious role play may not be enough“:

“In a truly remarkable and unpredictable election, Kevin Rudd, made Prime Minister just six weeks ago, campaigns as an opposition leader against Tony Abbott, the real Opposition Leader, who campaigns to be prime minister.

“Confused? That is the idea. Rudd has been brilliant at distancing himself from the Gillard era. That severance is dramatic. Rudd does not attack the Gillard government but he either ignores it completely (almost tearing its record from the history books) or damns it with faint praise.

“He chases the amnesia effect. He wants the people to forget. He knows they cannot forgive the past several years of Labor government. But he asks people to leave it behind and think of the future.

“This claim is astonishing in its audacity. Many people will find it outrageous.

“Yet Rudd has a genius for plausibility. There is no question he has the correct strategy. Over the past six weeks, Rudd has exceeded the hopes of even his most dedicated caucus backers.”

So there you have it. Choose your commentator and make your choice: senior Labor figures think the Rudd campaign has not started well and is losing momentum or Rudd has exceeded the hopes of even his most dedicated caucus backers. I’ve chosen to give Kelly a point on our Crikey best political journalist table and awarded Shanahan the first negative point of the campaign.

Ross Gittins in The Sydney Morning Herald gives his readers what is probably an unnecessary reminder that “Election promises destined to be broken“:

“Elections have become too panic-stricken for the politicians to stick to a vow of scrupulous honesty. Already, and for the next five weeks, promises are being made that — whether or not the makers of those promises realise it — are destined to be broken. The hard part for voters is picking which ones they are.”

But Gittins is understanding of the reasons behind that panic of the politicians:

“I suspect election campaigns have become more vicious, life-or-death affairs as politics has become less about convictions and more about careers — a ladder to be climbed by young people who leave university to work for a union or a politician, with ambitions to win preselection for a safe seat, make it into government, make into cabinet and then have a crack at the top job.

“When almost all the opportunities for promotion or demotion come just once every three years, it’s not hard to see why politicians get so desperate and campaigns so willing.”

“Loosen up, Tony, to counter the fake Rudd” is an insightful analysis of the Tony Abbott campaigning style where The Australian’s Janet Albrechtsen gives him some sensible advice.

“The Opposition Leader needs to recalibrate his campaigning style to counter Rudd, who is nothing if not a brilliant campaigner. Lousy at governing, Labor will worry about that other Rudd later. Abbott needs to counter the fake Rudd by being the real Abbott. When announcing policies, let voters see him smile and joke, speak normally and warmly … Even if it means taking a few risks, making a few mistakes, the real Abbott beats the robotic man of the past few months.”

And so to the scoreboard … 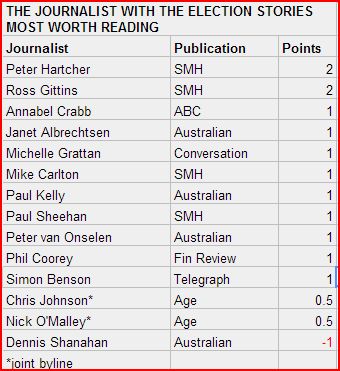 Campaign listening: ABC 891 Adelaide. They bill this station’s breakfast pair of Matthew Abraham and David Bevan as “the perfect breakfast blend” and to my ear this morning they were pretty close to just that: an interesting mixture of light-hearted banter with serious commentary and questioning. Local, national and international stories got this entertaining treatment with the presence of Abbott in their home town providing scope for them to demonstrate all three.

The newspaper previews of today’s planned company tax cuts were a godsend for the pair when they interviewed the visiting Opposition Leader. After listening with a polite chuckle or two to the repetition of the Abbott mantra that ends with stop the boats it was on with pressing issues to find out how much of the promised $5 billion being given by a 1.5 percentage point tax cut would be taken back by the country’s largest companies having to pay an extra 1.5 percentage points in tax to cover costs of the planned maternity leave scheme. Answering that question was not on the Abbott agenda, which left him sounding somewhat defensive as he preferred to use Julia Gillard as a third-party endorsement. In her words that he repeated a couple of times, “if you are against a company tax cut you are against j0bs”.

From the serious it was on to the not-so-serious as Messrs Abraham and Bevan explored what the Opposition Leader thought about the involvement of his Liberal Party staffers in the promotion of this story: 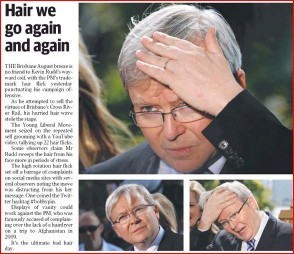 It was a case of don’t ask me, ask them before he was pressed to declare that posting video of a  Rudd press conference is hardly a hanging offence. All very friendly and polite really, but who wants aggro with their breakfast? And there was an even-handedness about dealing with the question of politician’s staff as the case of the misleading tweet from the Labor camp about the whereabouts of the Liberal member for Boothby was pursued — apparently for the second day in a row.

To round out the program another dash of politics featuring Labor’s Mark Butler and Chris Pyne from the Liberals in a regular weekly stop discussing issues of the day. Predictable point scoring it might have been but conducted without that annoying talking over the top of each other that mars so much of what passes for political debate on radio.

Other views: blogs and tweets of note. A selection of views from the blogs, social media, comments on Crikey stories and letters to the editor. From the Sydney Morning Herald: 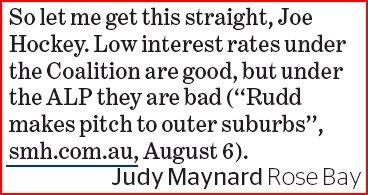 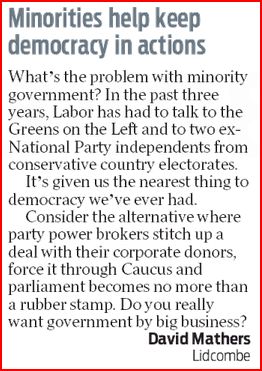 “If there is a budget ’emergency’ and a debt ‘crisis’, giving unfunded tax cuts is the height or recklessness. No?”

From the blog Harry Clarke:

“Overseas economic experts are often amazed at the pessimism that Australians express towards their economy.  Part of the story is our national affection for some drama. Partly it  is just the lunacy of the far right in trying to  exaggerate the perils our economy faces to advance their political and Newscorp-style journalistic objectives.”

From the blog of Robert B, Reich, Chancellor’s Professor of Public Policy at the University of California at Berkeley: “The Three Biggest Lies about Why Corporate Taxes Should Be Lowered“.

Rudd chasing “the amnesia effect”?
Has he had a look in the Limited News gnus rooms – they’ve been stock-piling it?

And riding instructions from the horse’s mouth? “Planet Princess”.

David Mathers recognises democracy at its best. What a pity that in the last three years none of the so called journalists and opinion writers working in the print and electronic media could recognise that democracy operating at its best.

Are you not including the new Guardian Australia in your ongoing survey? Lenore Taylor and Katharine Murphy are doing some excellent work there.