The Australian published a story online with a quote from a fake Joe Hockey Twitter account, and the error has yet to be corrected.

Video of the day. A Labor parody ad has been pulled down by YouTube after a complaint by the Liberal Party that it breached copyright. The ALP ad, which reuses a Liberal Party ad but with a different voiceover, was pulled from YouTube with the party advised it was due to a copyright infringement complaint. The ad is now on Facebook. Christopher Pyne issued a press release:

“YouTube remove videos when they breach their terms of service, when they’re offensive, contain illegal material, or contain copyrighted content. But having a political advertisement removed is unprecedented in Australia. Even YouTube can’t trust Labor to do the right thing.” 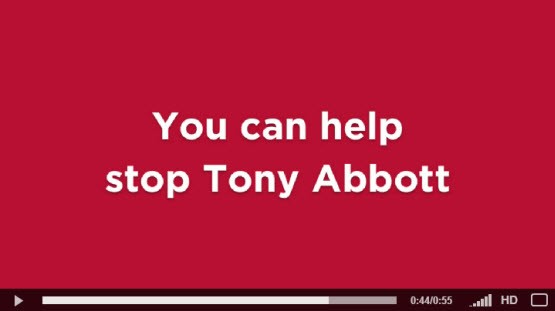 That’s not quite accurate — YouTube’s policy is to automatically take down videos subject to claims of copyright infringement. And oddly enough, the Liberal Party actually hosted the ad on its Facebook page yesterday in an effort to bag Labor’s negativity. — Bernard Keane

Oz publishes fake Hockey. Journos are on tight deadlines, and the pressure to turn around a story after a national event, like the Reserve Bank cutting interest rates to a historic low, is immense. A journalist from wire service Australian Associated Press didn’t do his or her due diligence in the rush to be first and included a tweet from @JoeHockey_MP (a fake Twitter account, since suspended) in AAP’s story about the cut:

At 4.16pm yesterday AAP sent out a “kill/takedown notice” to inform its clients of the error and request stories containing it be taken down. The message got through to The Sydney Morning Herald, which promptly took down the AAP story that had included the fake tweet. But it seems no one at The Australian keeps an eye on the email — its initial interest rate story, written by economics writers Adam Creighton and Michael Bennet “with additional reporting by Dow Jones Newswires and AAP”, was still online as of 12.30 this afternoon.

Creighton and Bennet could have gotten a clue about the tweet from News Corp stablemate News.com.au, which published a story about the fake Twitter account yesterday at 5.40pm. And if fellow News Corp stories weren’t close enough to home, Creighton and Bennet could have learnt they’d been duped by turning to page 11 of their own paper, where popular Strewth columnist James Jeffrey wrote of the hoax: 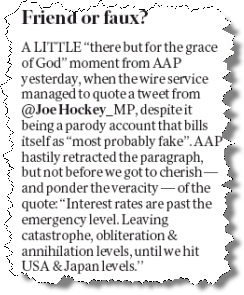 There but for the grace of God? Or simply there? Joe Hockey’s real Twitter account (@JoeHockey) has not mentioned the rate cut at all. — Cassidy Knowlton

Brooks and Murdoch … and Murdoch? According to Michael Wolff in USA Today, Rupert Murdoch is “on his way to looking like the louche, out-of-control, s-x-crazed older men” usually featured in his tabloids after allegations that both he and his son Lachlan Murdoch had affairs with former News Corp executive Rebekah Brooks. A spokesperson for the younger Murdoch denied the original Gawker report, telling Crikey that they maintain their position on the rumours which are  “total rubbish”. The gossip has been swirling as Brooks and fellow former News of the World editor Andy Coulson face conspiracy charges. — Sally Whyte

Age hints at cause of death. The Age has published a somewhat odd clarification on page two today relating to its story about the death of milliner Paris Kyne. The story does not mention cause of death but quotes an anonymous family member as saying “We don’t know how he died. We’re going to have to wait for the autopsy”. But on the bottom of the article the paper printed its standard suicide help information — “For help or information call Suicide Helpline Victoria on  1300 651 251, or Lifeline on 131 114 or visit beyondblue.org.au” — which implied that Kyne might have committed suicide. The Age has apologised for the implication, and the Lifeline information has been removed from the article online. 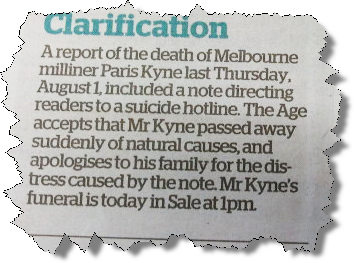 Twitter boosts TV ratings. Twitter boosts TV viewing and, of course, ratings, according to a new study from Nielsen Research, the US ratings and measurement giant. Reality, comedy and sport attract the biggest gains, drama the least. The study, released overnight, will confirm the feeling that many TV executives have that encouraging Twitter use during a program (such as Q&A on ABC1) is beneficial for the ratings bottom line. The benefits flow both ways, with Nielsen saying: “higher levels of tweeting may cause additional viewers to tune in to programming” and that higher TV ratings “cause more people to tweet more often”.

Of course, there’s a potential downside in all of this, with some canny executives artificially inflating Twitter conversations around shows. Britain’s Channel 4 current affairs program Despatches reported this week that there are now click farms in Bangladesh being used to boost likes and following numbers for Facebook and Twitter. — Glenn Dyer

Brooks must have some standards, mustn’t she?
But it did look funny, that twig Rupe went out on for her?