iSentia index: the age of the Twitterverse

Are the daily tabloids still relevant in this age of digital media? Kevin Rudd will be hoping not, since he is the undisputed king of the social media sphere.

News Corp has been accused this week of throwing its weight around, The Daily Telegraph editorialising heavily against Labor on the first day of the election campaign, calling on voters to ”KICK THIS MOB OUT.” Whether or not legendary New York Post editor Col Allan had a hand in it, and putting aside whether it’s reasonable or not for Prime Minister Kevin Rudd to have a go back, the point some are missing is that when you factor in social media and declining print circulation, the Tele might not have quite the impact it once did (though it remains Australia’s leading daily).

We are entering our first truly digital campaign, a classic political campaign but one fought with the aid of new weaponry, where smart politicians can bypass media gatekeepers and go direct to the voter, mobilising fans and their party bases through Twitter, Facebook and Instagram. And as our social media measurement chart has consistently shown, the politician who has best harnessed social media in this country is Kevin Rudd.

In terms of mainstream media messaging, our week-on-week comparison shows Opposition Leader Tony Abbott creeping closer to Rudd for overall coverage, as he should with a campaign underway, though it is still a distant second. Indeed, only four federal Liberal MPs make our Top 20 this week, demonstrating the ALP currently has the conversation back on its terms.

Rudd’s audacious campaign strategy involves acting like an opposition leader, critiquing the opposition while emphasising the future under a “Rudd government”, not a “Labor Government”, in what is an increasingly presidential-style campaign. The strategy will test Abbott’s credibility as an alternative PM. Yet most analysts seem to agree, it remains Rudd who has the most ground to make up. 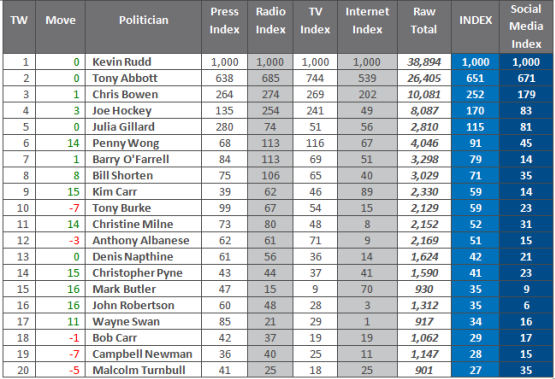 Talkback radio is still exploring the possibility of a Turnbull led Liberal party, while Julia Gillard remains part of the conversation.

As we enter campaign mode, economic management is the central issue, with social media chatter focusing on the respective leaders and their treasurers.

Cutting to record low interest rates amid an election campaign has brought the RBA governor into the headlines, especially in the print media.