The RBA's decision to cut interest rates made Tuesday a winner for Labor. But Tony Abbott's move to reduce the company tax rate is a major promise which may shift some votes. 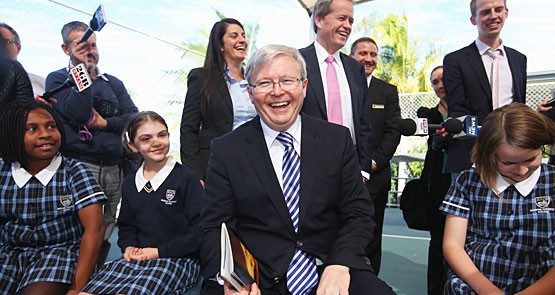 WHO WON THE DAY ON TUESDAY?

Bernard Keane, Crikey Canberra correspondent: The RBA won it for Rudd, who is concentrating hard on wooing western Sydney — and the interest rate cut will go down very well there. He got the bonus that shadow treasurer Joe Hockey held a media conference to say the rate cut reflected how badly Labor had managed the economy and ended up getting tangled up on the GST. What Hockey said was that the Coalition would be conducting a review of taxation and that the GST would be part of it — no more or less than the Coalition’s previously stated position (and an eminently sensible one). But that came out in the media as Hockey paving the way for lifting the GST. Election campaigns can be unfair like that.

Richard Farmer, Crikey election analyst: I’m tempted to hand victory to candidate Nick Xenophon; an independent Senate candidate could hardly hope for more than his local paper The Advertiser delivered him this morning with a plug at the top of page one. Still, taking the broader national view, the Reserve Bank came to Labor’s rescue with an interest rate cut. The immediate benefit to those with a mortgage made it clearly Labor’s day.

Norman Abjorensen, visiting fellow at the ANU and former Liberal speechwriter: Like all campaigns, it began with a focus on gaffes: Hockey’s confusion of a candidate’s ethnic background and a Liberal candidate’s lack of any policy grasp whatsoever. Hockey dug himself into a hole by seeking to make capital out of the fall in interest rates, which would have puzzled the punters who are looking at their mortgage repayments dropping. And is it good politics to cut the company tax rate at a time of falling revenues? Is this the discredited Laffer curve making a return to economic policy? The Coalition might have won the day purely in terms of media attention, but the gaffe focus was a real negative. ALP win.

Paul Barratt, career public servant and director of Australia21: The ALP won the day. The Labor Party can rest on the fact that it does have budget costings out there. The Coalition is looking evasive and raising the spectre of the Horvath episode of last time. Coalition spokespeople look evasive when they say you can’t trust Treasury but you can trust us. They are also on the back foot about the GST. They find themselves in a defensive position.

Kevin Rudd: Starting the day early in the marginal Sydney seat of Greenway, Rudd spruiked his after-school care plan, where babies were kissed and story books read. He moved to Bennelong, another marginal seat before the end of the morning. Appearing with candidate Jason Yat-sen Li, Rudd announced that Korean would become a priority language in schools. The PM has also agreed to a debate hosted by the Seven Network and Facebook on Sunday — and tweeted the challenge at Abbott.

Tony Abbott: The morning was focused around the announcement of the company tax cut at Bickford’s factory in Adelaide. Appearing with Joe Hockey, Abbott said that the Coalition wouldn’t raise GST and maintained that Sunday’s debate should be hosted by the National Press Club. Apart from an interview on Adelaide radio this morning, the Opposition Leader’s morning has been based at the factory in the safe Labor seat of Makin.

Christine Milne: The Greens leader is in Canberra today, where she launched an enrolment campaign with Sarah Hanson-Young and the Greens’ ACT Senate candidate Simon Sheikh. She still had time to tweet about the gardening progress at Parliament House.