It's all about pollies and their meat in today's edition of Campaign Bites.

Campaign reading: the best of the press. If you are in the “so much to read, so little time” category when it comes to election coverage, then this daily selection is designed to help. I’ll be doing my best to sort out the best for you and keeping tabs on the field to end up with Crikey‘s choice of the political journalist of the campaign. Starting with yesterday’s opening suggestions, one point is awarded to the author of each selection and I reserve the right to give a negative point for any truly outrageous pieces of written nonsense I come across. The scores so far … 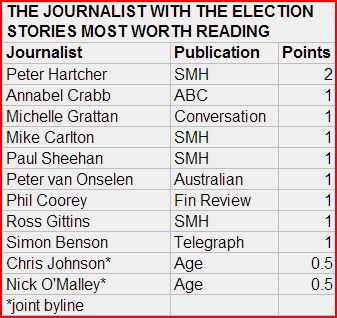 Campaigning listening: ABC 612 Brisbane. We begin the first of our surveys of how breakfast radio around the country is covering the election campaign with the big tease by Spencer Howson of 612 ABC Brisbane after he dispensed with the obligatory weather details just after 5am.

Giving a reviews of what papers said, Howson made a cryptic reference to the MP photographed with his p-nis in a glass of red wine and other interesting happy snaps. There was the promise of more details to come, but it was not until the second item of the 7am news that flesh was put on the bone, so to speak. By then, presumably, ABC listeners would have picked the Courier Mail off the lawn to discover that the state MP who chairs the parliamentary committee had texted another picture of himself apparently drinking the red from the aforementioned glass. Howson then moved on to more general subjects of texting and instagramming.

The daily 612 Cereal Box segments of phone-in comments from listeners brought forth a call for Liberals to replace Opposition Leader Tony Abbott with former leader Malcolm Turnbull, and fun was made of Prime Minister Kevin Rudd appealing for $10 donations. Overall it was political cereal lite, and politics did not rate a mention when Howson discussed events of the day with his pair of producers. When the editor of the Redlands Times and the Bayside Bulletin city news made his weekly appearance, the seat of Bowman was predicted as a Liberal win, but there was more time spent on a bug eating the pandanus pines.

Serious political discussion was left to the two doses of the ABC’s AM with its talk of cost-of-living pressures, interest rates and the Prime Minister supporting his former staffer Andrew Charlton to take over as the Labor candidate for the NSW central coast seat held by Craig Thomson. Independent MP Peter Slipper slipped into the news bulletins with a report that his current intention was to run again, but he was yet to make up his mind. The single frisson of excitement came with the late breaking news that Clive Palmer had arrived uninvited at the Comslie Hotel to gate-crash a South East Brisbane Chamber of Commerce breakfast being addressed by Rudd and other candidates for the seat of Griffith.

Oh, lest I forget. A listener wanted to know if you can you recycle those increasingly popular coffee pods. And there will be no flashing billboards on roadsides in Brisbane because the City Council is banning them. It’s all a matter of safety — preventing drivers from being distracted.

Over views: blogs and tweets of note. A selection of views from the blogs, social media, comments on Crikey stories and letters to the editor. From The Piping Shrike blog, “Running on empty“:

“The start of the election campaign has at least confirmed it will be what it always was going to be on, the economy. Even the Daily Telegraph couldn’t keep up the pretence that asylum seekers would be an issue with its “representative” sample of Western Sydney voters, whose concerns over cost of living, health and education seemed no different from what the nation as a whole has been telling pollsters. Maybe Western Sydney tells us about nothing more special than the current state of Labor/Liberal insecurities … The common theme running through the message is a new way economic policy is being viewed, namely that government is not responsible for the state of the economy, rather just for protecting the electorate from the worst of it.”

Crikey daily indicator. Today’s reading: Labor 21.6% probability of an election win; Coalition 78.4% probability of winning. Labor down 1.1 points on the day and down 2.6 points in the last 30 days.

Stunts of the day. A silly hat and a silly coat as Tony Abbott put some meat on his campaign yesterday.

Back in Canberra PM Kevin Rudd spent his last day before entering caretaker mode by giving away a final $650 million or so. And the key expression of both men on Monday was again the one that prompted this letter in this morning’s Sydney Morning Herald: 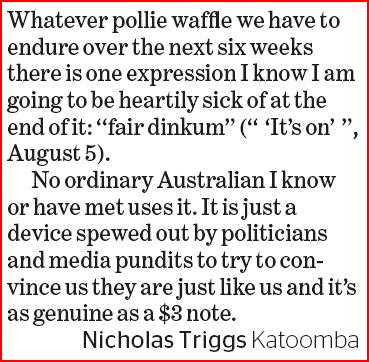 Personally my pet hate is rapidly becoming “cut to the bone”. What’s yours?

Other news and views noted along the way …

Instead of “fair dinkum” and similar I suggest a new saying prompted by this morning’s news – “fair soak of the sav.”