McDonald's protesters have been "ringed" by police as their Tecoma occupation continues in the face of mounting pressure to disperse. 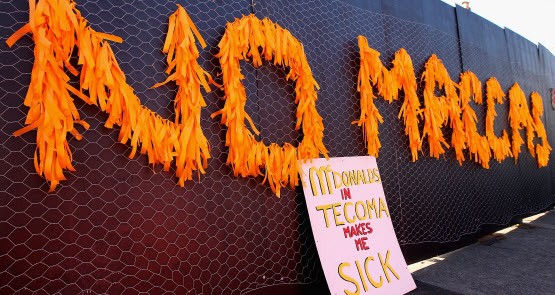 The full extent of the McDonald’s and property owner offensive against community activists protesting against the construction of a branch of the global burger chain in the Victorian town of Tecoma has been laid bare by sternly worded eviction letters and a pre-dawn police mobilisation.

In the early hours of this morning, up to 50 police wearing protective gear “ringed” activists outside the planned site on the Burwood Highway in an echo of the tactics employed during the S11 and Occupy Melbourne protests.

Amid the glare of TV cameras from the major commercial networks, a lone 24-year-old woman, known as “roof girl”, was plucked from the top of the edifice by the force’s elite search-and-rescue squad using a cherry picker to make way for the demolition of existing buildings to erect the controversial outlet. The woman was later charged with trespass.

Activists have been banned by an interim Supreme Court order from approaching or occupying the site and must stay beyond  a so-called “exclusion zone” or risk arrest and prosecution. Asbestos removal is expected to take place before the buildings can be razed.

But protesters have also been threatened by the body corporate of a strip of shops adjacent to the site. A letter penned by Whittles strata manager Lisa Swinney last week and obtained by Crikey revokes “permission to your group the right to occupy this privately owned property for the purpose of protesting”. Swinney “respectfully” requests that the group disperse. Shops on the strip, including popular local dinner haunt Bonsai Bali, have provided the protesters with power, wi-fi, food, water and materials as they camped outside.

A further letter sent by Swinney to Belgrave Senior Sergeant Doug Berglund calls on police to facilitate the removal of protesters from the site because “their actions” are “creating issues for the safe and unhindered travel through our site and obstructing our members from having quiet enjoyment of the property they own”.

Crikey understands that McDonald’s workplace safety and security manager and former NSW police officer Bob Dunger has been a central point of liaison between tenants and police. Last week, Crikey exposed a cache of notes belonging to Dunger and exposing the firm’s tactics.

Burger Off! spokesman Garry Muratore told Crikey that “we have had terrific support from the tenants in this block. Early in the protest [No Macca’s in the Hills spokesperson] Peta Freeman contacted the body corporate, who too were very supportive, their only condition[s] were not to use tenant parking spots and make sure the site was clean of litter each night.”

Muratore says the directive to disperse came as a shock and says Dunger and Belgrave Police had “suggested” tenants check whether the body corporate had public liability insurance. However, Crikey understands those claims are contested. Protesters initially received legal advice to ignore the letter but have since moved to a public easement adjacent to the shopping strip.

Muratore says he got a tip-off last night from an officer on the site that the search-and-rescue operation was imminent, as foreshadowed by Crikey last week. “At 4am a small army of police arrived and pushed everyone back. I got down there about 4.20, and there were extra lights and the cherry picker,” he said. “We were pushed back onto Burwood Highway … Police attempted at least twice at about 5am to talk to her [roof girl], but she got back inside the roof, and at about 6.30am she was charged with trespass.”

A spokesperson for Victoria Police confirmed the force “has liaised with all parties who have been affected by the Tecoma protest. This is a role police play in any large gatherings, including public events and protests.”

McDonald’s did not respond to queries lodged with its media spokesperson this morning. The case was due back in court today but was adjourned by two weeks as lawyers at Maurice Blackburn prepare to put the protesters’ side of the story.

Anyone still so deluded that sole function of police/law is for the rich & powerful to control the rest of us?

AR, no truer words were spoken. Who would have thought though that the populace would be able to galvanise themselves into forces that beget police responses (this is hardly law enforcement- the Police’s prime responsibility).
In NSW I have been amazed (and heartened) at the response in rural areas to CSG mining. Normally tagged by the mainstream media as Greenies, it is now just ordinary fold (farmers, citizens and environmentalists) seeking to save their environment from the ravages of rampant capitalism. More power to the people I say!