Journalists at The Age have issued an apology for accessing private data, but they say it was in the public interest.

Apology of the day. In The Age today on page two, journalists Royce Millar, Nick McKenzie and Ben Schneiders have said sorry-not-sorry that they used a leaked password to illegally access the ALP’s Electrac voter database. They concede that in accessing the database without authorisation they breached section 478.1(a) of the Commonwealth Criminal Code, ”Unauthorised Access to Restricted Data”. Millar, McKenzie and Schneiders say they were unaware of the section when they accessed the data, but they acknowledge that is no excuse. However, they make it clear there was a public interest in their activities:

“We accept that we did in fact contravene this provision by accessing the database. We do wish to point out, however, that the access to the database was not for an improper motive, but rather to write a story that we felt was a matter of public interest. No names or identifiable personal details were disclosed in the story without the consent of persons concerned. No personal details were stored or used for other purposes.”

The journalists admit that they “should have been more diligent” in their methods.

New world order at Fairfax. We were interested to see this internal staff email from Sean Aylmer, the newly minted group director of Fairfax’s Business Media. Aylmer sets out how the merger of Fairfax’s business copy will roll out; a model will be devised later this month, then road tested and refined in September. He assures staff that “[e]ach masthead needs to maintain its distinctive style and coverage” (some don’t think that’s possible), and issues a call for Fairfax’s publications to “co-operate rather than compete with each other”.

Video of the day. Syrian President Bashar al-Assad has delivered a rare speech to Syrian state television, vowing to deal with the country’s rebels by “striking with an iron fist”. “I don’t think that any sane human being would think that terrorism can be dealt with via politics,” al-Assad said. 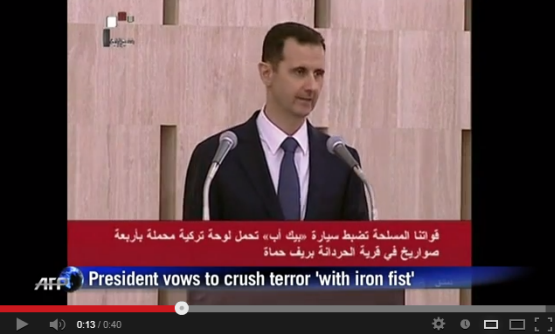