There are more political parties contesting this election than ever before. Is that a win for democracy -- or democratic overkill? Crikey intern Henry Belot asks some experts. 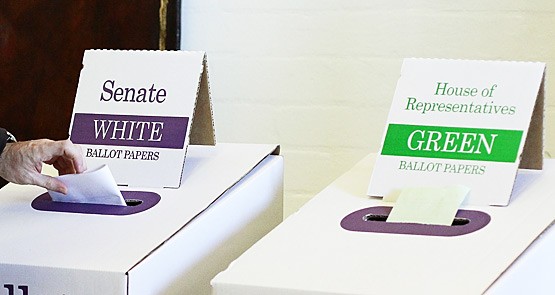 Voters will be spoiled for choice when they enter the polling booth on September 7 — the number of registered political parties has more than doubled since the 2010 election, and is at a record high.

So is the proliferation of parties a triumph for democracy, or for opportunistic individuals seeking publicity?

More political parties are registered to contest the federal election than ever before, with the Australian Electoral Commission approving the most applications since party registration was introduced in 1984. With the AEC no longer processing party applications following the issue of the writs last night, the number of registered parties is now 54, which is an increase on the 25 parties registered in 2010 and the 30 registered in 2007.

New entrants include Katter’s Australian Party, the Palmer United Party, the WikiLeaks Party, The Republican Party of Australia, The Rise Up Australia Party and the curiously named Coke in the Bubblers Party. It’s not too hard to convince the AEC you should be registered; an organisation must present the names and addresses of a minimum of 500 members who are listed on the electoral roll, plus a $500 application fee. Alternatively, a political party can be launched by a sitting member of Parliament.

Binoy Kampmark, a Victorian Senate candidate for the WikiLeaks Party and a legal expert at RMIT University, told Crikey that the diversification of political parties reflected a growing disillusionment with mainstream politics. “The emergence of alternative parties suggests a crowding of the political centre,” said Kampmark. “Another factor is the crude and reactionary populism that has encouraged the rise of alternative political visions.”

Nick Economou, a lecturer at the School of Political and Social Inquiry at Monash, says there is a clear element of disillusionment among politically engaged voters on the fringes of the major parties, although their influence is marginal. “The vast majority of voters in Australia still remain clustered around the four major parties: Labor, the Greens, the Liberals and the Nationals,” he said.

And while 54 registered political parties may be a record high, given the two-party system and the rarity of minority governments, it’s actually low when compared with some other countries, according to Ian McAllister, a professor with ANU’s School of Politics and International Relations. In Britain, 492 political parties are registered; there are more than 150 in Spain. The Finnish government is a six-party coalition, while Denmark’s coalition government encompasses four distinct parties.

In Australia, smaller parties have tended to be single-issue organisations, protest parties, or vanity projects by individuals. One such personality is billionaire mining magnate Clive Palmer, who took time out from planning a life-size replica of the Titanic and building the world’s largest dinosaur theme park to launch the Palmer United Party in April.

“A surprising feature of Australian democracy has been its tendency to be tepid, sometimes drab conformism — one is not being democratic if one is being too variable.”

The Rise Up Australia Party, which made headlines following the controversial statements of its leader Pastor Danny Nalliah, is set to continue its hardline stance on immigration. Meanwhile, the Coke in the Bubblers Party promises to “inform, monitor, model and grow” Australian democracy. Its website remains under construction, highlighting the limited resources and disorganised campaigns of many minor parties.

But the electoral influence of these parties is expected to remain limited, particularly with the allocation of preferences in the House of Representatives usually confirming the primary vote, and with major parties being the primary influencers of Senate outcomes. “Because of the nature of preferential voting in the House of Representatives, minority parties are usually whipped out early with their votes redistributed accordingly,” said McAllister.

In Queensland, the state widely tipped to make or break the ALP’s chances, the fight to secure preferences began in earnest with Rudd visiting Bob Katter last week.

Minor parties can find it hard to drum up cash. “It remains to be seen whether any of these minor parties can afford television advertisements in the coming weeks,” said Sally Young, associate professor of social and political science at the University of Melbourne.

Surely the addition of political voices in Australian politics is a positive step towards holding mainstream parties accountable to election promises? Kampmark certainly thinks so. “The very essence of democratic practice is diversity,” he said. “A surprising feature of Australian democracy has been its tendency to be tepid, sometimes drab conformism — one is not being democratic if one is being too variable.”

But not everyone is convinced. Economu told Crikey the “increased number of parties in this election is, as always, a case of people being opportunistic during election campaigns” — it’s business as usual for those seeking exposure and publicity. And there are concerns ballot papers will be very large in some states (and with small font) because of the high number of parties and candidates, which may lead to less below-the-line voting in the Senate, and a higher informal vote.

So while Abbott has declared that he will not lead a minority government if elected, the emergence of more parties in Australia may mean the major parties won’t have it all their own way in the future.

While party registration has closed, it is not too late to be nominated as a candidate; noon on August 15 is the final cut-off date for nominations. The names of all candidates will be released the next day. The electoral roll is finalised on August 12, seven days after the issue of writs.

I suggest Crkey do a profile of each of these parties every day. We need some light relief