It’s not all junk mail — election leaflets archived for posterity

A website dedicated to transparent government is uploading election leaflets stuffed into letterboxes across the country. There are some amusing ones, writes freelance journalist El Gibbs.

With the 2013 federal election campaign finally under way, two of the more experienced pioneers of citizen journalism are gearing up to do it all again.

Election Leaflets, an online library of political ephemera, is one of the many projects from the OpenAustralia Foundation, a group using technology to make democracy more transparent. The group has also developed tools to keep track of local development applications, parliamentary proceedings and freedom of information requests.

The website allows anyone to send a digital or actual copy of campaign material that has been poked through the letterbox. The leaflets are then tagged by party, electorate and subject, creating a searchable database of political material that had been destined for the recycling bin.

Volunteers from OpenAustralia created the site in 2010 and have collected material from around Australia. The WA state election in March proved a goldmine.

“We wanted to make it easy for people who are disillusioned with politics to be able to contribute to something positive. By uploading or sending us the flyers they get, they can directly help increase transparency in political campaigning,” said founder Matthew Landauer. Co-founder Katherine Szuminska said: “The site means that if a political party is saying one thing in one electorate and then something else in another state, they can be held accountable for that.”

“One of the best things about 2010 was the long letters we would get from people sending us the flyers they had picked up. They felt that they were doing something important by sharing something that would before only been seen by people in their neighbourhood,” said Landauer.

Szuminska said: “We’ve added in all the new political parties, as there were a few gaps in 2010, so this time we want material from all over the country — this also helps people when they are deciding on how to vote; they can see all the different promises.”

Already there are some treasures from the campaign. One flyer, from Macquarie, says the Liberal Party owns The Daily Telegraph. Another from Bendigo has collated what former ALP ministers said about Kevin Rudd, while in Eden-Monaro, the No Carbon Tax Climate Sceptics have been busy. The site is also useful for tracking the generic leaflet layouts that most parties use, just changing the candidate details. 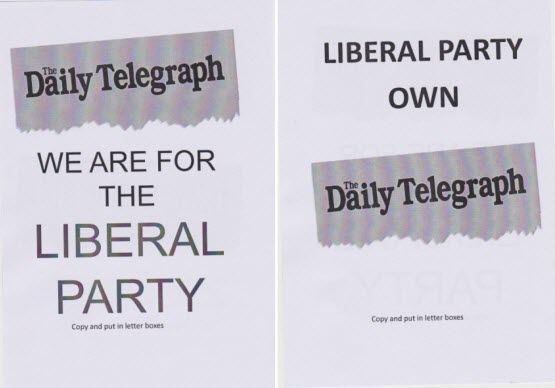 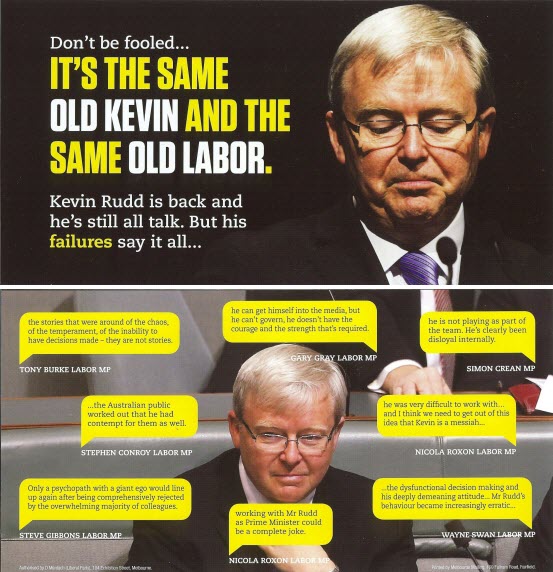 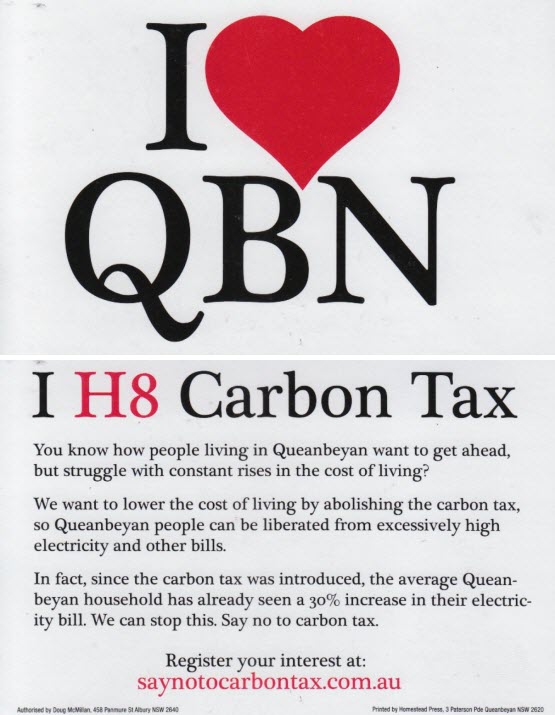 This year, Election Leaflets is also working with the National Library of Australia, which is archiving the hard-copy leaflets for posterity. The library believes that “[p]olitical ephemera provides a unique perspective into Australia’s social life and political landscape: the rise and fall of policies, issues, parties and careers”.

“Working with the National Library means that leaflets people send us can become part of our national archive, available for researchers and journalists into the future. So, if you find a flyer in your letterbox, get it to us,” said Landauer.

*Disclosure: El Gibbs has worked with the OpenAustralia Foundation

I thought it was the other way round?
Doesn’t “Murdoch own the Liberal Party”?

I wonder what the State of New York would have to say about the “I heart QBN” one – they own the trademark and are quite militant about policing it, particularly for political and commercial usage…

The State Library of Victoria also collects political ephemera, so if you have any leftovers please think of them – particularly areas outside of Melbourne. They collect political brochures, election pamphlets, how-to-vote cards and candidate posters. They can be posted to:

SLV also welcomes donations relating to social justice campaigns, environmental campaigns, community campaigns etc. If you include your name and contact details they’ll send you an acknowledgment of your donation.

I imagine the other state libraries might have similar collections, if you’re not a Victorian!

After Hawke won I began collecting the flyers & ads of the Dems, ALP & Coalition at each election until the Rodent’s reign began. Who would have thought that that decade of pop’n’fresh, airhead greed would look like the high point of political debate. Real issues were promulgated, akshal points of philosophical difference were on offer.
Now we have bop the stoats & send ten bucks in opening speeches.
Poor bugger, my country.