In our daily election scorecard, we ask the experts who won the first day of campaigning, check in on the leaders’ activities, keep track of their spending (and saving) promises, and crown a tweet of the day.

Crikey asks the sharpest political commentators which leader got the best of the campaigning day, plus we track where the leaders are and what cash promises they’ve made …

Bernard Keane, Crikey Canberra correspondent: Announceables gave Labor a win yesterday, rolling out a $200 million handout to the car companies and unveiling a $450 million after-school childcare package while in the last throes of governing before the caretaker period properly commenced at 5.30PM. Tony Abbott went for the visuals with a trip to a Queensland meatworks, although the subsequent press coverage inconveniently focused on the grant the plant had obtained from Labor and Abbott’s struggles with the impact of the carbon price. Abbott also found time to dispatch letters to Ian Watt, head of PM&C, and Jillian Broadbent, one-time Coalition favourite who now heads the Clean Energy Finance Corporation. Abbott’s lunchtime press release announcing the letters declared that we had entered caretaker. Er, wrong, Tony, that was still hours away. Still, mere trivia for an alternative prime minister.

Richard Farmer, Crikey election analyst: A meat packing factory with all its blood and gore seemed an appropriate location for the old boxer Tony Abbott yesterday as he went about his daily photo opportunity and moved further ahead on points in this election contest. With his opponent confined to Canberra wearing his suit and tie it was a no contest really. Talking heads in suits are barely noticed by most watchers of the nightly news bulletins. It’s time for Kevin to get out and about and into a funny hat or two of his own. The winner is Abbott.

Tim Wilson, policy director at the Institute of Public Affairs: Abbott basically got through the first day without promising much new, whereas Rudd’s announcements barely penetrated. Neither side can use spending announcements without raising the question of either how are you going to pay for it, what are you going to cut or how much more will debt increase? Newspoll showing Rudd’s decline in popularity wasn’t a good news start to the campaign and showed that Rudd’s honeymoon is over. Abbott’s key is to keep the discussion on the economy. Every day the national discussion is on the state of the economy and the budget, Abbott is winning. He’s used his first day to kick the carbon tax, but he’s used his card and now needs to move on. It was a modest victory for Abbott on the first day.

Stephen Mayne, local councillor and Crikey founder: Burdened by its six-year legacy, Labor should be in a world of trouble but came through day one in reasonable shape. Rudd has the confidence of a man who believes he can win and reinforced his newly consultative persona with a day one cabinet meeting and then a sharing an appearance with Kate Ellis and Bill Shorten, two former strident critics. There was more policy depth to Labor with the after-school care announcement plus a $200 million car industry handout augmented by the jingoistic Buy Australian push, which wedged the conservative state governments in Queensland and NSW. Tony Abbott’s pledge to terminate carbon pricing looked a bit predictable by comparison and Penny Wong had the better of Mathias Corman in the 7.30 debate even though the budget should be Labor’s biggest problem. Labor won the day comfortably.

John Connolly, founder of PR firm John Connolly and Partners: Watching this election is like watching your favourite movie for the seventeenth time. You know the result but you think there is some small chance Rocky Rudd can win the final fight. Ignoring social media, who you think won the first round depends on whether you only read Fairfax or News Corp papers. Objectively Rudd is the clear winner so far but that’s not going to change the final scene.

Experts’ verdict: Labor by a nose

Tony Abbott kept his cash cards close to his chest yesterday, while Kevin Rudd went on this $700 million spending spree:

Total for the campaign to date:

Kevin Rudd: He got the insanity running early by beginning his debate with electorate opponent (and former AMA president Bill Glasson) before 8am. This went for at least two hours, and covered party donations, asylum seeker policy and economic issues. No winner was declared. Rudd then held a press conference with Deputy PM Anthony Albanese to announce the Cross River Rail project. This afternoon he will jet back to Canberra to open an Afghanistan exhibition at the War Memorial, with Abbott.

Tony Abbott: Starting the day in Dobell, troubled ex-Labor MP Craig Thomson’s electorate, Abbott enjoyed a leisurely chat and cup of tea with a working family. Wife Margie joined him at the Wyong Shire Council depot where he talked about the negative impacts of the government’s FBT changes. He heads Canberra this afternoon.

Christine Milne: The Greens’ leader is in Melbourne today and launched a new high-speed rail initiative with MP Adam Bandt (stealing the thunder of the Bullet Train for Australia party). She’ll jet up to Canberra this afternoon for a joint press conference with Sarah Hanson-Young tomorrow. All three party leaders will be in Canberra this afternoon.

Clive Palmer: He was photographed watching Rudd’s debate this morning. He then tweeted that the Prime Minister was too scared to debate him, had nothing to offer Australia — and shot off in his sports car.

Can you read the Prime Minister’s handwriting? You might have better luck than us … 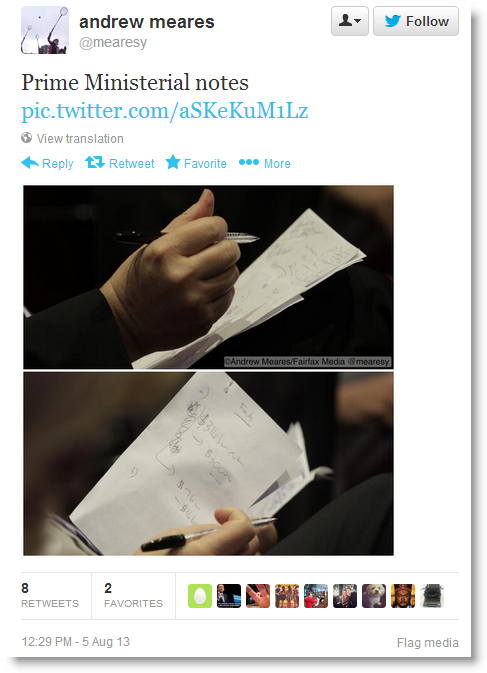 While FDOTM is clearly the outstanding cartoonist of his generation….
Tony Abbott’s appearance at the sausage factory yesterday produced this stunning “Rembrandt” from David Rowe in the Fin. http://is.gd/n1lcfa

Yes, the IPA’s view was somewhat predictable. I’m looking forward to Mr Wilson’s analysis on the day after Mr Abbott runs over a dog while driving a tractor (whilst wearing a high-viz vest, of course). “Abbott raised awareness of safety issues in agricultural industries, highlighted excessive government red-tape under which our primary producers suffer, and announced measures reduced spending on veterinary health. Meanwhile, Rudd’s message failed to cut through, largely because we had our fingers in our ears and kept shouting ‘not listening, not listening’. A clear win to Abbott.”

@Mocca
You made my tea come out of my nose…