Candidate watch. The starting gun has been fired on the federal election, and Tips is keeping an eye on the victories, stuff-ups, gaffes and bon mots of candidates from around the country. If you spy someone on the campaign trail or making waves on social media, be sure to email Tips (and please do send in photos of candidates doing anything memorable, plus screenshots of odd Facebook comments, etc). Consider yourself a Crikey stringer for the campaign! Here’s a few early tweets to whet your appetite … 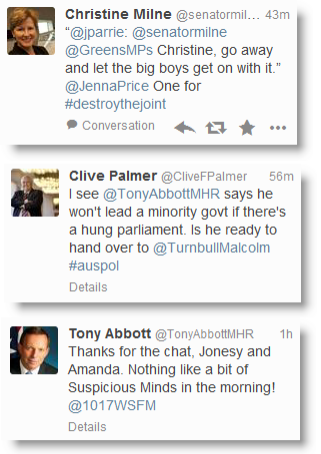 Tough times in aged care. Workers who care for the elderly and disabled in their homes do a great job and save taxpayers money — so is there trouble in the sector? This tip from a community sector insider:

“My wife is $100 per week worse off under her new award [Social, Community, Home Care and Disability Services Award 2010], which began in July. Slight increase in base rate and NO travel allowance, except for shifts under an hour. Theory is to get all the workers working with clients close to them so buckets of money will be available to spend on the clients. Reality is mass resignations of staff. Home care for the elderly, especially in country areas where there is much driving, is kaput — expect a big increase in people going into nursing homes.”

We’re talking with the United Voice union to find out if there is a problem with the award, which covers people working in crisis assistance, supported housing, social and community services, home care and family day care. It seems this issue may relate to the rationalisation of state-based awards into a national one; the union told us that in some states at least, allowances have not been cut at all (the tip above relates to someone in the ACT). If you work in the sector, let us know if you’ve taken a pay cut.

McDonald’s fingers gnomes. By now, Crikey readers will be familiar with the ongoing court action over the Golden Arches’ bid to erect yet another edifice, this one at Tecoma in Victoria’s Dandenongs. In the latest legal affidavits submitted by the burger chain and obtained by Crikey, photos of gnomes attached to roofs on the protest land are cited as vital evidence of nefarious activity — an interesting move given McDonald’s would like to demolish the buildings.

Meanwhile, Macca’s security guards have been busy slapping letters on cars parked in the precinct demanding owners move them because they’re on “McDonald’s Land”. Over the weekend one young local policeman said police were “sick and tired” of security making allegations and getting officers out for no good reason. Lawyers at Maurice Blackburn, acting for the protesters, have applied for an adjournment in the case, which was due back in court tomorrow. 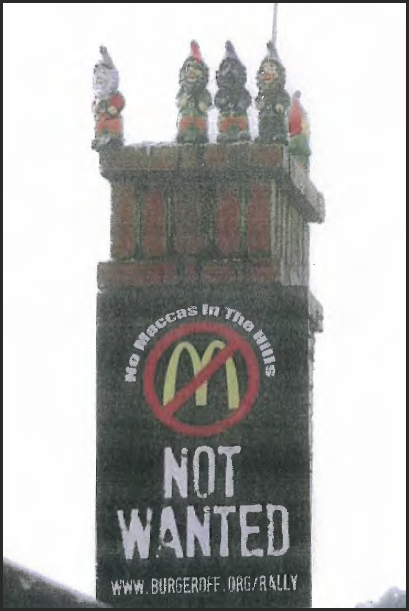 RMIT rumblings. Oh dear, oh dear — sounds like there’s some friction at Melbourne university RMIT’s business college — have staff been told “not to pay any attention to domestic students because they don’t bring in as much money as international students”?

ABC guide. We’ve been running some tips from Aunty of late — the ABC seems to be always in the process of reinventing how it operates and measures its quality (setting and communicating audience targets to journalists is the latest). A former employee said the audience targets were not a bad idea, but there was a problem:

“At annual assessments the second item on the list was ‘maintain and increase audience’ which I always used to rage at — I would love to maintain and increase audience but without the guidance that ratings  provide that’s a bit hard. There were no ratings done in my core region the entire time I was there, or since 2000 in fact, which means everybody is guessing and hoping they are getting it right. I wasn’t exactly overjoyed that something that was apparently the second most important criteria on which I was going to be judged was being completely ignored by management.”

We’ve heard similar responses from other ABC reporters in regional areas, who say they don’t know how audience targets can be set because ratings and surveys are conducted so infrequently (if ever).

Our mole forwarded this ABC Radio “strategic plan”, sent out by boss Kate Dundas a few years ago, to show where Aunty was going. It left us rather baffled … 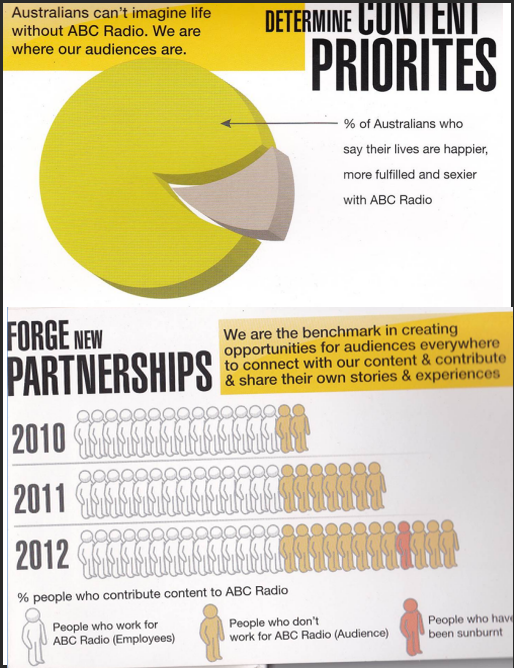 Sloppy on AM Tuesday with Sabra Lane “..our target is a million new jobs, we’ll lift the tide for everyone…”
Is that by freeing up all those unnecessary civil servants they promise to fire?