And they're off! The media are already spruiking poll results in great detail. Plus other snippets of this campaign so far.

Poll watch. There’s one thing about this election campaign that we can be sure of — media coverage more dominated by opinion polls than during any other campaign. Yesterday the party leaders had barely finished their opening addresses to the press before the Seven News was reporting on a six-question survey conducted that afternoon by ReachTel of 2949 residents across Australia that put the two-party preferred score at Labor 48% to the Coalition’s 52%.

This morning it’s Newspoll, published in The Australian, with the same overall 48% to 52% result.

I’ll be relying on our own expert The Poll Bludger to sort out the inevitably conflicting findings of Newspoll, Nielsen, Morgan, Galaxy, Essential and ReachTel in the weeks ahead. His latest Bludger Track of the lot of them puts the starting point at 50:50, but the Labor figure will be marked down a shade when the next calculation is made.

Labor support declines. The Crikey Election Indicator, based on what the markets say, has Labor taking a turn for the worse this week. 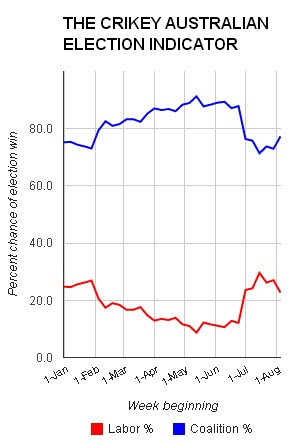 A terrible few days for Labor. I cannot think of any prime minister who has called an election after a week of such bad news stories as those that preceded Kevin Rudd’s announcement. As if the report into the scandals involving NSW Labor Party members were not a sufficient problem, election eve had an explosion in the budget deficit, the promise of increased unemployment, spending cuts and some new tax increases. Fodder for a torrent of negative headlines.

Rudd will be hoping that better news is on the way in the form of another interest rate cut by the Reserve Bank board when it meets tomorrow. The market expects that it will be so. 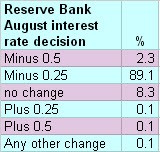 The pick of the post-announcement political reads

The pick of the weekend political reads

Some other views. So much for what the so-called experts think. At Campaign Bites we’ll be searching blogs, the social media, letters to the editor and comments by readers on our own Crikey election stories for some alternative views. Your help in finding interesting snippets will be appreciated. Send suggestions to me via [email protected]

A letter writer in The Age who would not have been surprised by this morning’s Sydney Daily Telegraph front page: 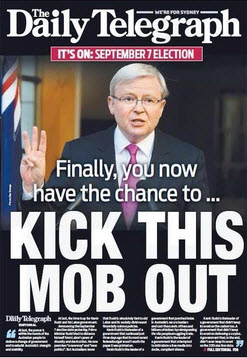 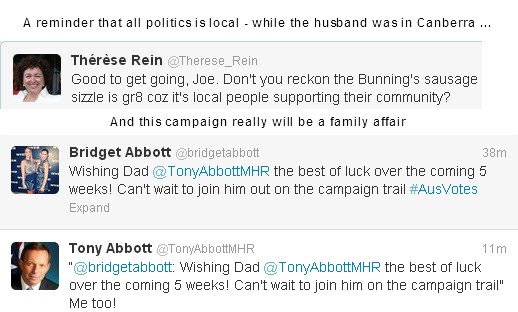 En Passant: Neoliberalism and the cruel election — “Kevin Rudd and Tony Abbott, the chief barbarians of political capitalism, will battle it out on 7 September. On those areas they both think they can win popular support and votes, like asylum seekers, they will try to outbid each other in cruelty.”

“Perhaps the most impressive part of Rudd’s performance, was his willingness to call out the press gallery on their failure to address the real issues on actual policies. It promises to be a lively campaign.”

Other news and views noted along the way. 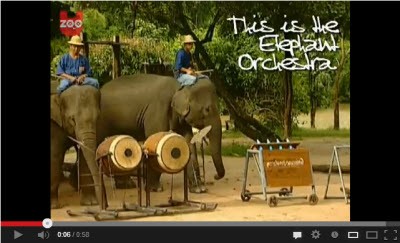