The Labor government handled the economy with aplomb, avoiding the trap of the GFC. But economist and University of Queensland academic John Quiggin says the party did a good job of hiding it. 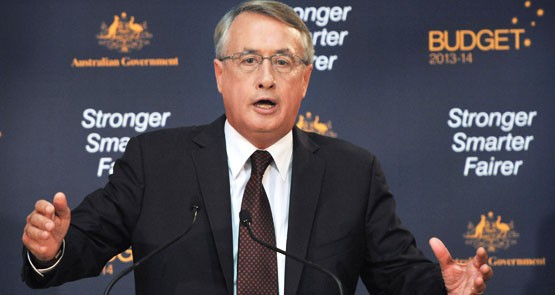 The first thing to be said about the economic policy debate in the lead-up to the election is that we shouldn’t be having one. Economic outcomes under Labor have been good in absolute terms and spectacular when the global economic environment is taken into account. At least as regards the medium-term settings of fiscal and monetary policy, it is hard to see any reason for change.

Labor’s economic success can be traced back to the vigorous and effective response to the global financial crisis of 2008. The government undertook a highly effective fiscal stimulus, co-ordinated its fiscal policy with the monetary policy of the Reserve Bank and fixed major vulnerabilities in the system of prudential regulation, most notably the absence of a deposit guarantee.

The results speak for themselves. Almost alone in the Organisation for Economic Co-operation and Development, Australia escaped recession, whether this is judged on the “two quarters of negative growth” rule of thumb or a more general assessment of economic performance. Inflation has remained quiescent, sitting right in the middle of the Reserve Bank’s target range. Unemployment remains near its 30-year low. Despite unfavourable demographic trends associated with the ageing of the baby boomers, the employment-population ratio is near an all-time high.

At the same time, and despite the global crisis, some of the chronic imbalances that threatened the Australian economy when Labor came to office have abated. The bubble in house prices that emerged in the early 2000s has deflated gradually, in marked contrast with the disastrous bursting of such bubbles in many other countries. Household savings rates, negative in the last years of the Howard government, have recovered strongly to levels not seen since the 1980s. The ratio of foreign debt to national income has declined, and debt has been redirected from financing consumption (including consumption of housing services) to financing investment, primarily in the mining sector.

It is, of course, possible to argue about the appropriate division of credit between this government, its predecessors, the success of monetary policy under the Reserve Bank, and the favourable external circumstances of the mining boom. But on the most important question of how we managed to avoid the effects of the GFC, there can be little doubt that it was government policy that was responsible. The close co-ordination between fiscal and monetary policy means that there is no sense in separating the credit due to the Reserve Bank from that due to the government.

It is possible that a Coalition government, faced with strong advice from Treasury in favour of fiscal stimulus, would have abandoned the focus on headline measures of budget balance that characterised the Howard-Costello era. Under the actual circumstances of the crisis, however, the opposition, then led by Malcolm Turnbull and Julie Bishop, with Joe Hockey as shadow treasurer, opposed the stimulus and proposed instead to pursue permanent tax cuts.

In retrospect it has been claimed that demand from China, and the mining boom more generally, meant that stimulus was unnecessary. This claim is nonsense for at least three reasons. First, minerals prices fell sharply in the immediate aftermath of the crisis, making Australia more rather than less vulnerable. Second, the rapid Chinese recovery was due to the policies of fiscal stimulus very similar to those adopted in Australia. And finally, the failure of economic recovery in other countries that turned rapidly to austerity once the immediate crisis was past is a further demonstration of the validity of the Keynesian analysis.

If public debate were remotely rational then, the best course for the opposition would be to change the subject. Instead, we are in the absurd position where the LNP was until recently seen as better at economic management than Labor, and the Coalition remains equal.

Much of the blame for this fiasco must go to former treasurer Wayne Swan. Whatever the substantive merits of the policies he oversaw, Swan failed to show any conviction in defending them. The huge success of Keynesian stimulus should have resulted in a fundamental reconsideration of the “fiscal conservatism” inherited from former PM John Howard and former treasurer Peter Costello. Instead of pursuing a target of balance or small surplus every year, Keynesian theory prescribes a counter-cyclical policy of deficits in recession and surpluses in booms.

While occasionally paying lip service to this idea, Swan’s public rhetoric mostly treated the GFC as an embarrassing departure from reality and the return to budget surplus as a holy grail. His oft-repeated promise to return the budget to surplus by 2012-13 was, of course, a disastrous failure in practice. Even worse though was the rhetorical gift to the spurious economic analysis propounded by Opposition Leader Tony Abbott, in which budget surplus is the sole goal of fiscal policy.

Similar points may be made with respect to prudential regulation. While the Australian financial system survived the crisis very well and with relatively limited government intervention, the crisis exposed fundamental flaws in the reasoning underlying the light-handed regulation introduced in the 1980s, and extended by the Wallis Review in 1996. It was obvious that a new review was needed — even businessman Stan Wallis himself said as much last year. But Swan resolutely refused to consider such a measure, leaving the opposition an obvious opportunity to win votes, which it has taken by proposing its own inquiry. Even such a simple step as charging banks for the guarantee introduced in 2008 and made permanent in 2011 was too much for Swan.

Since returning to office, Prime Minister Kevin Rudd has gone some distance towards remedying Swan’s total inability to communicate an economic message. It remains to be seen, however, whether he will repair the damage in time.

This is an article that everyone should see and should be on The Australian.

I wish I had this piece in hand a week ago when defending the Gov’t handling of the GST. The Labor Govt has been hopelessly inept at selling itself – albeit fighting a mostly hostile press. The current Govt gets no recognition for any achievements, but somehow manages to get blamed if a tradie falls off a roof. Also – it continues to pain me how so many citizens are saying how tough they are doing it when clearly they are actually doing pretty well. It’s a bit like the miners who have become used to “super” profits and complain when profits fall back to more reasonable levels.

I remember the glee with which Howard’s enemies capitalised on his true statement that Australians had never been better off than they were. It’s poor politics to look complacent about voters’ living standards.

Having said that, the coalition continues to be seen as good or better economic managers because-

b) The zero net debt and billions in the bank that Howard and Costello left for Kevin and Wayne to spend. Many Australians continue to give credit to the Howard government for today’s economic resilience.

c) The fact that the stimulus spending has continued long after it was needed, creating the impression that Labor can’t resist an opportunity to spend other people’s money if it can.

d) The cautionary lesson from Europe about why a surplus over the economic cycle is necessary.

e) The fact that all Julia’s legacy programmes are massively expensive and unfunded. Gonski, the NDIS, the NBN, border security.

Headline economic indicators may be ok but Labor just does not look competent. They’re more like an inexperienced driver taking all sorts of risks who hasn’t crashed yet.

further to Mr Hand’s response, the coalition also received a $300b windfall on tax receipts, over and above their own estimates, over the last 6 years of their govt.

– most of what the coalition paid off was from asset sales, i.e. nothing was changed, the house was sold to pay off the mortgage,

– worse still, the coalition left the country in structural deficit at the end of the boom in tax receipts,

– a lot of it went on pointless middle and upper class welfare, and tax cuts,

The very same permanent tax cuts advocated by Turnbull and Hockey during the GFC crisis would have left the budget position even further awry than it is now.

– Labor has lost the political argument, not the economic one,

– this is far too nuanced for the average voter who doesn’t care so much to be concerned about details, their impressions are made on flimsy evidence,

– such as that provided by Mr Hand.

The political skills of the Labor govt are hopeless, but there is good reason to believe that the economic team of the coalition is incompetent, based directly on the wrong calls they have made in opposition for the last 6 years.

What Breakfast and Hand have said, and, the fact that Labor still haven’t had the gumption to claim back the Keating legacy, which was stolen so connivingly by Howard.