Col Pot’s war on Rudd: how the tabloids turned under Allan

Day one of the election campaign and News Corp Australia’s million-selling tabloids have flagged their intention to pull out all stops to dispatch the Rudd government to political purgatory through an unprecedented anti-Labor salvo splashed on front pages across the country from now until polling day.

With former Daily Tele turned New York Post hatchet man Col Allan screaming from the sidelines, Rupert’s mass circulation local titles sank the knife in overnight, with theTele urging readers in a front page editorial to KICK THIS MOB OUT in about 190-point font. It follows an extraordinary run of tabloid interventions, with Saturday’s Courier Mail claiming the government’s budget “doesn’t add up” following on from its Friday splash: “Kev’s $733 million bank heist”. 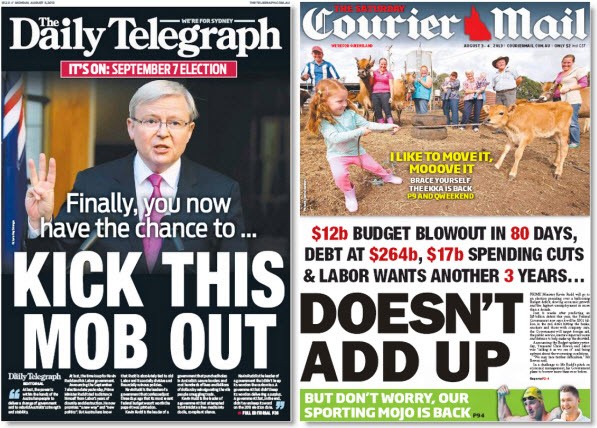 On Saturday, the Tele was bemoaning the “Price of Labor”, while the Sunday Herald Sun and Queensland Sunday Mail were mocking Rudd’s Nauru “Island hell” …

Tony Abbott, responding to suggestions from Sabra Lane on AM this morning that News was “well in your corner”, cryptically admitted that “we all have to take the rough with the smooth.”

The swashbuckling start signals a return to News’ fascination with making and breaking governments, with Allan under riding instructions from Rupert to revitalise the tabs and help install Abbott in the Lodge. His role might also unnerve CEO Kim Williams with Tele editor Paul Whittaker, Herald Sun Victorian editorial tsar Peter Blunden and The Australian‘s Chris Mitchell back in the driver’s seat with direct lines into New York.

Crikey understands that former Herald Sun editor turned conservative blogger Piers Akerman has been despairing of Williams’ 20 months in the top job, telling whoever will listen that Gough Whitlam’s son-in-law had stuffed up the company. At a function in Sydney recently Akerman reportedly cut loose, bemoaning his boss’ progress and claiming that his firm, like Fairfax, was being run by consultants.

One mole close to News was scathing: “He has certainly bagged Kim privately to a number of people. Along the lines of ‘we’re no different to Fairfax, it’s just a group of consultants running the place; you can’t tell them apart’.”

It’s now 13 months on from Williams’ fireside chat in which he announced that previously state-based print and digital sales units would be combined into one national team and the company’s 19 Australian divisions would be streamlined into five. Since then, Boston Consulting has been hard at work implementing the Williams masterplan and annoying the senior newspaper brass.

Sensitivities remain acute: a paragraph reporting the pointy heads’ presence at a Allan-helmed editorial gee-up session last Wednesday (also attended by Williams) was removed, without acknowledgement, from the online version of Nick Leys’ widely read Diary column this morning. A News source said the story was “wrong” and that no current or former BCG employees were there. 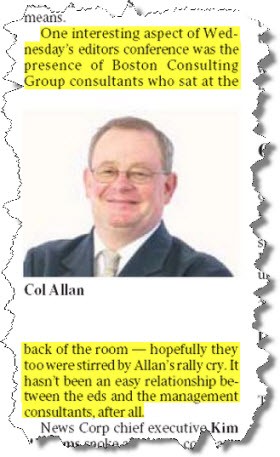 According to the News mole: “I think there are two separate issues: one is the editorial content of the papers and the other is the business performance. Most of the problem with the business performance is revenue related. That’s about a fairly disastrous restructure of the ad sales group around Australia. And I think Col is here pretty specifically to inject a bit of life into the tabloids.

“So there’s a perceived sameness about the papers, and the other issue is a really big fall in revenue, some say 40% in the last year or so since they restructured the sales group.”

Sources further report the editorial group was chuffed when Williams took over from John Hartigan because of his background of success at Foxtel. “It was starting to lack, their numbers were falling and I think they saw Kim as someone who could arrest that with some clever moves … and instead he brought in a bunch of consultants which was the antithesis of the News culture,” one reported.

“And one of the biggest moves was the restructure of the ad group and it didn’t go well. So suddenly the editors, who are historically a massively loyal group, suddenly they were very grumpy to the extent that some ex-editors like Piers were openly bagging Kim around Sydney.

“It was a particularly Sydney issue really, that’s where the discontent was strongest. You also had a fallout between Lachlan [Murdoch] and Kim over the NRL [TV rights] deal … there was an awareness among the editors that Lachlan and Kim had fallen out, the ad sales restructure was a disaster, circulation was still falling so Kim hadn’t had any real wins.”

Speculation is now rife that Murdoch Jr may return to News’ local arm as executive chairman if Williams’ reforms continue to rankle and the company’s newspapers earnings slip further amid the troubled transition to digital.

There is also concern internally over the $10 million marketing pitch for the News+ subscription brand. In an email last week to all marketing staff, group marketing director Corin Dimopoulos apparently told Holt Street desk dwellers to start consuming the print and digital products so they knew what they were marketing.

A marketing insider said the obsession with process and decision-making matrices was being mirrored in that division: “The only thing News is producing in abundance is a truckload of internal Powerpoint presentations, hiring consultants, shuffling papers and org charts and scratching their heads as to why audiences are leaving in droves.”

Two weeks ago, Akerman turned on training associated with the $60 million EIDOS Methode operating system, the key publishing reform launched by Williams year. In an email chain obtained by Crikey, Akerman questioned “whether anyone with any editorial experience put Methode through the same scrutiny given to Atex and Cyber before it was purchased?”. Courier-Mail columnist Paul Syvret concurred, branding the updates from News Corp digital guru Peter Judd “incomprehensible technobabble mumble-f-ck”.

In the editors’ minds, the return of the rough and tumble Allan is a temporary solution to the mind-numbing corporatese. In this Sunday profile from 2000, Allan, responding to a Crikey sealed section item “Pissing in the Sink”, the pugnacious former Dubbo resident admitted to occasionally doing the deed in his office: “Well, there’s a long tradition of this here, you see … I mean, a very long and excellent tradition. And let me say it wasn’t a frequent thing. And it was done as much to entertain the likes of Mr [Stephen] Mayne, and I’m glad that it’s succeeded.”

A News Corp Australia spokesperson, Stephen Browning, declined to comment this morning. Akerman did not respond to an emailed query.

Mr Allan apparently has an affinity with porcine livestock:

The Trolls have been despatched – with one aim, to “Save Rupert’s Precious”?

Is that what he looks like – without Weiner in hand?

The Disgraceful behavior of foul mouthed schoolyard bully boys Lachlan Murdoch and James Packer is symptomatic what is wrong with the Media in Australia as it moves to discredit Fairfax and its future viability.
Rupert Murdoch wants to control everything and this is what it is all about. These headlines are only the beginning and with the comparison of Conroy with the the most despicable dictators the world has ever seen missing of course, Murdoch himself.
Journalism has a bad enough name anyway and this adds to its woes as it becomes the most reviled profession which is just trying to outdo itself in a sewer of sledging anyone to ensure that Editors keep their
jobs; for now.
News Corporation works on infiltration of competitive editorial with Fairfax, The Conversation ( the latest victim and of course the news rooms of the ABC as well as political political commentary programs such as the Insiders. They even bought Alan Koller to do their bidding.
Of course if Abbott wins the ABC will be privatized and SBS closed down – Abbott hates the ABC and will not appear- he sends Malcolm.
It was Conroy and Gillard that were the focus of vilification now its Rudd’s turn. News are ” pissed” as they have invested millions in a ” Love Tony ” sycophantic and sickening campaign. The Advertiser is ” humanizing” Bernardi – if such a thing is possible as there is a now genuine concern that Abbott is so unmarketable that he will lose the unloseable election.
It is now TEAM ABBOTT not Tony anymore – I wonder what the Narcissistic Abbott thinks of that.
It is interesting that News-Poll is ” spinning ” the survey results and refuse to point out that the small swings they are reporting are not significant and that Abbott trend line is still pointing south.

This cannot be accepted without a fight. Whichever party wins, it has to be on a level playing field, not this disgusting character assassination, all so Rupert doesn’t have his most precious Aussie asset (Foxtel) destroyed by the NBN.

Share it, tweet it, tell it to your friends and family – we can’t take this interference in our democracy anymore!