Bell tolls for Eden-Monaro, where nobody’s revved up on Monaro St

Eden-Monaro may lose its status as the nation's bellwether seat this time around. Which, as freelance journalist James Rose discovered walking around Queanbeyan, wouldn't trouble the locals. 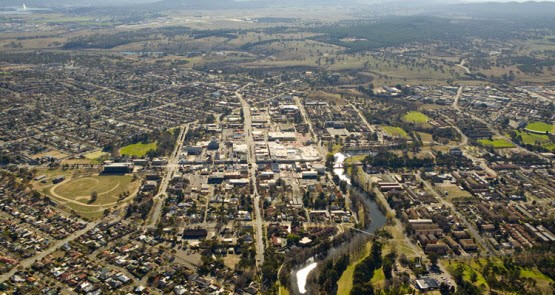 Monaro Street, Queanbeyan. Despite the evocative street name — prompting images of Bathursts past, GT stripes and boozed-up rev heads on Conrod — there are no burn-outs here today. It’s all quiet in the town that gave us Rickie Stuart and Brad Haddin.

A cool breeze wanders along like a disinterested voter on polling day. And in this town, the “capital” of perhaps Australia’s most celebrated electorate — Eden-Monaro — that breeze sits well enough on the shoulders of the electorate.

Since 1972, the voters here have managed quite a trick: whomever they have elected has represented the eventual government in that election. The winner Here has been the winner There. So, the number crunchers inevitably hover around this seat, hanging on its every shimmer and poring over even the thinnest exit poll. Media pundits swoon with its very mention. It is, yes, The Bellwether Seat and the nation is led to believe its voters hold the fate of the nation in their hands.

For David Butler, editor of the Fairfax-owned The Queanbeyan Age, the bellwether status is of limited importance for the locals. “It’s a bit of a curiosity,” he told Crikey. “People don’t put a massive weight on it. There’s no science to it.”

It’s issues that count, he suggested, just like anywhere else: “Hip pocket stuff. Public service job cuts and so on.” That’s when they’re interested at all.

But the “Eden-Monaro factor” sticks. According to Butler, Opposition Leader Tony Abbott has been here five times in the last six months. Incumbent ALP member Mike Kelly, who is the Minister for Defence Materiel, has been roping in various ministers to blow through town. There’s a Greens candidate and even a Palmer United Party hopeful. No one seems to have told the national campaign managers that Eden-Monaro is not made up of civic highbrows earnestly pondering the fate of the nation, wearing their dubious king-maker status like an ermine robe.

“Bellwether? I dunno … What the f-ck’s a bellwether?”

A chat with a few locals in Monaro Street emphasises that Eden-Monaro is just another electorate. Leonie at the newsagent reckons asylum seekers and leadership changes are significant. Mention of the “Eden-Monaro Factor” is ignored until raised by Crikey. “I guess it’s important,” she offered, less than convincingly.

Trent at Walsh’s Hotel reckoned the voting numbers would pretty much go 50/50 at the bar: “We get both sides in here.” Again it’s asylum seekers, jobs, “the carbon tax”, words that generate a few murmurs and weighted looks from the grizzle-faced and safety-shirted barflies. Bartenders at two other pubs I entered — the Tourist Hotel and the Royal — tell me politics doesn’t get discussed. “It’s a sports bar,” the bloke at the Tourist said, pointing to a mute TV showing a recorded football game.

Meanwhile, at Tony’s Hairdressing, down a dingy arcade off Monaro, Mario goes to work on Zed’s coif. Again it’s asylum seekers and “the carbon tax”. “I reckon it’s fair enough they send asylum seekers to Papua New Guinea,” said Jason, the owner. None seem all that bothered by the “Eden-Monaro factor”. The scissors snip on in silence.

For Queanbeyanites, this lack of interest in their own fame is probably just as well. It looks like the “Eden-Monaro factor” may well evaporate this election. Mike Kelly is a well-respected member and many here seem to agree he will likely be returned — a swing against Labor of 4.2% is needed. But polls suggest a Liberal victory nationally. The Liberals’ Peter Hendy, ex CEO of the Australian Chamber of Commerce and Industry, is taking on Kelly.

Indeed, there is a hint the Liberal Party is taking a longer-term view of the seat, hoping that changed demographics on the coastal strip around Batemans Bay and in new suburban developments will shift the votes their way.

On election night, Eden-Monaro will again have the Antony Greens of this world bloviating. But out along Monaro Street, as likely elsewhere in the electorate, other more prosaic factors will be in play. As one young punter, giggling with his mates, responded outside a cafe: “Bellwether? I dunno … What the f-ck’s a bellwether?”

Their sniggering drifted on the wind down Monaro Street.

* Correction: The original version of this story incorrectly stated that Labor’s two-party preferred vote in Eden-Monaro had not fallen below 54% since 1996; this was incorrect, as the seat was held by a Liberal from 1996 to 2007.

Notes from a bellwether

Campaign diary: Queanbeyan, where democracy is an awkward cup of coffee

Seats to watch: Eden-Monaro, the battle that wins the war

“Bellwether? I dunno … What the f-ck’s a bellwether?”

James, you come across as a sneering elitist little prat. The people of Queanbeyan deserve better from you and Crikey. Let’s hope the coverage improves. Cheers, M

@Mike smith.
Half right, mate.
The Bell-wether is one who can be relied upon to be at or near the front of the flock. A bell is attached to aid shepherds in finding the sheep if they wander.
Eden-Manro’s bellwether status is such because it indicates the general inclination of the electoral flock.
Queenbeyan, aparently not “sheep country”.

Ss Matt & Mike omit the salient point about a bell wether – it is castrated and is left to age quietly amongst the flocks, wearing its bell as a sign of betrayal(to let the herder find the rest easily) & impotence. Perfect metaphor for politics.