Abbott’s ‘no minority govt’ pledge could cost him his job

Tony Abbott says there's no way he'd lead a minority government -- even if he wins the most seats. ACIL Allen Consulting governance expert Stephen Bartos asks if that pledge is legally and ethically sound, and explores the ramifications. 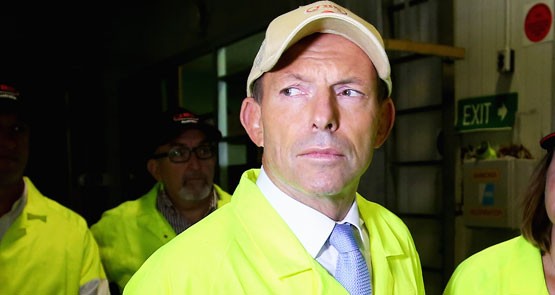 Opposition Leader Tony Abbott said yesterday that “under no circumstances” would the Coalition enter into a minority government if the federal election delivers a hung Parliament.

While there are still five weeks of campaigning left, opinion polls suggest a hung Parliament is a possibility — even though it is not the outcome Abbott might wish for.

For the purposes of defining a hung Parliament, the Senate is irrelevant. For most of Australia’s history, governments have not had a majority in the Senate. What matters is the lower house.

There are 150 seats in the House of Representatives, the chamber in which government is formed. If Labor and the Coalition win 74 seats each and the balance is held by two independents — or any of the many other permutations which would see two or more independents with the balance of power — then Abbott’s resolve will be tested. So does he have the right to refuse to even attempt to form government?

The Australian constitution says little about government, and does not even mention the office of prime minister. In formal terms (section 61) executive power is vested in the Queen and her representative the governor-general. In practice however this power is delegated to the party with a majority in the House of Representatives.

By far the most common election outcome in Australia has been that a major party wins a clear majority of seats. The number of votes in total does not matter, what counts is the seats — the reason why the major parties concentrate on marginal electorates. After the election result is known, the leader of the party with the most seats visits the governor-general who says “rightho me old china, run off and govern” or words to that effect, and signs the paperwork. It is purely a formality. The leader of the party concerned becomes prime minister and gets on with governing.

A hung Parliament is a much hazier proposition with little by way of precedent.

If there is no clear majority, it is open to either leader to make a case that they should be entrusted with the executive powers. Conventionally it is likely that the party with the most seats would be given the first opportunity to make its claims. But the governor-general can’t force a party to take power. If for example Abbott had the largest number of seats but no overall majority (say, 74 Coalition, 71 Labor and five independents), and stuck to his promise of not governing in a minority, he could not be made to. Rudd could tell the Governor-General he had the support to govern and would then be given the chance to demonstrate his majority in the House. As we know from the recent Gillard government experience, the fate of the government then hangs in the balance with every division (i.e. vote).

“Voters probably expect the members of Parliament they elect to have at least some passing interest in governing the country.”

It is conceivable in theory that if the independents wanted to support the Coalition but the Coalition leader refused to accept that support, there would have to be a new election. In practice that is unlikely — the Coalition would probably instead elect a new leader prepared to accept the independents’ support. Australia does not have a presidential system; the only people who get to vote for Abbott or Rudd are the electors of Warringah and Griffith. If the Coalition were to decide to change leaders after the election for the purposes of securing a majority in the House, then that would be up to them. It would not be hard to find a volunteer to become prime minister.

The situation is complicated by the constitutional requirement for the House of Representatives to elect a speaker. The speaker is not one of the numbers counted to determine the majority to form government. Traditionally the speaker comes from the party with a majority of seats, so a safe majority in the House has been regarded as at least 76 seats.

That tradition however has recently been overturned (see Peter Slipper). A party with a very narrow majority could almost certainly find someone on the other side keen on the trappings of the speaker’s office or a top-up to their superannuation who is prepared to take the job (see Peter Slipper). That person might even turn out to be a surprisingly good speaker (see Peter Slipper). In practice the office of speaker has become another piece in the complicated numbers game, rather than an absolute constraint on the ability of a party to form government.

So constitutionally and legally a party with the largest number of seats but short of an absolute majority does not have to become the government. Ethically though, would there be a problem if it did not even try?

Voters probably expect the members of Parliament they elect to have at least some passing interest in governing the country. Refusal to govern by the party with the most seats, especially if that also were the party with the largest number of votes, might backfire.

If an Abbott refusal to make deals in order to govern precipitated a new election, voters would have an interesting choice. Would they reward the Coalition for sticking to its principles, or punish it for being too high-minded for its own good? We have never been there, so the question is hypothetical, but one suspects voters might prefer pragmatism over the inconvenience of an extra election.

Abbott’s insistence on not forming minority government is an element of Coalition electoral strategy at this point of the campaign but creates a hostage for the future. In the event of a hung Parliament the promise will make life more difficult for the Governor-General in determining who has the best claims to govern, and more difficult for the Coalition in determining who is best to lead them.

I would just like to point out that EVERY Liberal Prime Minister has led a Minority Government. The Coalition is nothing more than an agreement by the National/Country Party to support the Liberal Party in votes of Confidence and motions of Supply in return for political favours.

I wish people would actually call the Libs on this, but no-one ever does.

I’m almost tempted to believe Abbott on this – there’s a first time for everything, apparently.

There’s no way Abbott could hold a minority govt together, he lacks the conciliatory skills required for sensitive negotiation. Just ask Windsor and Oakeshott.

Abbott has been waiting for six years to throw his weight around unbridled, a minority scenario would be his idea of a nightmare.

The question I would like the media ask is:

Mr Abbott, Just what is it that you don’t like about democracy?

@frey, there’s only one thing he doesn’t like about democracy ie: the democratic bit.

i’m sorry but if abbott does win isn’t the coalition a minority govt contract between libs n nats or are the nats just totally taken for granted as lib lap dogs??