Essendon scandal has flashbacks of waterfront dispute ... ABC focussing too much on ABC24? ... ex Labor staffer takes to the skies ...

Bastard Boys muscle up in Essendon drugs war. Yesterday’s Crikey item on the spinners and lawyers descending on Essendon threw up some interesting connections, many of them forged in the notorious 1998 waterfront dispute. Before his pivotal role in the O’Connors meatworks spat, James Hird’s lawyer Steven Amendola worked on the MUA vs Patrick case as counsel for the Commonwealth — he was there as barrister Tony Pagone’s junior solicitor and was friendly with Hird spinner and Liberal operative Ian Hanke.

The waterfront dispute was a huge story, bigger than the Essendon saga. It was national and had political, commercial and legal ramifications on a massive scale. That’s where these boys earned their stripes. And of course, there’s also the link with union buster Chris Corrigan, who was the boss of Patrick before it was forcibly taken over by new Essendon chair Paul Little’s Toll Holdings. To cap the incestuousness, Hird has now hired Julian Burnside QC, who was MUA counsel in the waterfront dispute against Hanke, Amendola, Corrigan and Peter Reith. When it comes to IR and AFL, Melbourne is far, far less than two degrees of separation.

Your ABC. Yesterday we revealed the ABC has set itself audience targets and is telling journos to meet them. NSW journos have been told to focus more on breaking news, “not just stories that nobody else does”. Ouch! Now we’ve heard that some journos think flagship news programs are being slighted as the ABC focuses on ABC News 24. This from a mole at Aunty:

“There is a great resentment brewing already, with many skilled and experienced news producers suddenly playing second fiddle to younger, more inexperienced ‘production desk co-ordinators’ with only a background in News24. The level of communication within the newsroom has also never been worse, with more layers of newsroom middle management added to muddy the waters. The reality is it’s simply restructuring the newsroom so news resources can continue getting funnelled into News24, at the expense of the flagship shows like 7pm news.”

We’ve also heard grumblings from the Melbourne newsroom — has someone senior chastised journos’ decision to approve a pay rise offer, labelling them “scabs”? If you’re an ABC insider, tell us how things are going at the national broadcaster.

No Macca’s law firm seeks adjournment. The law firm at the centre of the anti-Tecoma McDonald’s stoush has slammed the bully boy anti-activist tactics of the global burger chain as an affront to civil liberties and democracy. Crikey revealed yesterday that McDonald’s Australia senior management was working closely with Victoria Police to crack down on protesters, who are subject of a interim Supreme Court injunction that restricts their movement around the site of the controversial store in Melbourne’s Dandenongs.

In a statement released late this morning, Maurice Blackburn said it is acting pro bono “because peaceful protest is fundamental to civil rights and democracy”. The firm is seeking a delay to the Supreme Court hearing set down for Tuesday because annexures to affidavits lodged by McDonald’s two weeks ago were not provided to the eight defendants deemed representative of the broader activist cohort. “Transcripts of social media activity were not made available to Maurice Blackburn or some of the defendants within the timeframe to allow the hearing to proceed,” the firm said. Stay tuned.

Crikey asks, Rudd delivers. Two days ago, Tips, intrigued by some of the photos Kevin Rudd has been posting on the internet, asked if there was a cardboard Kevin cut-out doing the rounds on the campaign trail. Yesterday we came across this on social media: 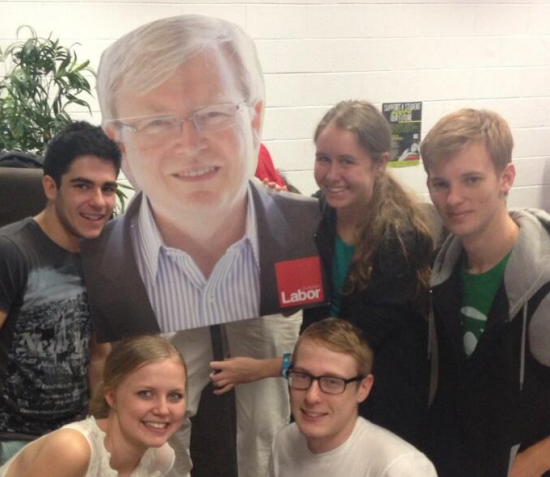 The Kevin cut-out has been added to the Crikey bunker’s election decor wishlist, along with this T-shirt: 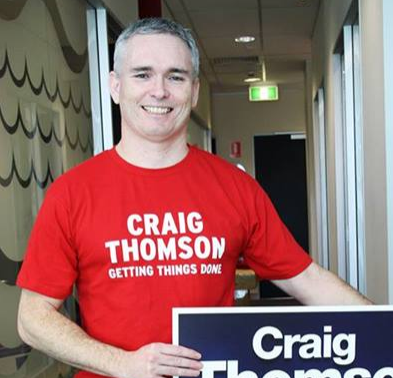 We’d also love a historic Ron Boswell poster — “not pretty but pretty effective” — and we’ve scoured the website of NYC mayor hopeful Anthony Weiner for merchandise, but sadly there’s none available. If you’ve got your hands on some election-related material to adorn the Crikey office with to get in the mood for Australia Decides 2013, get in touch.

Carboned? The Age’s femme de gossip Suzanne Carbone has been MIA lately, and a tipster wanted to know if she had left. No; she’s on leave and returning soon.

Staffer takes to the skies. It’s always interesting to see what ex-political staffers get up to when they leave the stressy hothouse of Parliament House. We hear that Ben Smith-Stubbs, who has done stints with federal Labor ministers Joe Ludwig and Nick Sherry (and KRudd back in 2007-8) “has relocated to Parafield, SA to train as a pilot with Flight Training Adelaide. Finally putting the hot air to use?”

We called Ben, who confirmed the tip and said he was hoping to come out with a pilot’s licence and make a career of it. Should Liberal MPs be worried if they hear this Labor name over the in-flight intercom one day? We like to keep track of staffers, so drop us a line if you know of any interesting career changes.