Some Egyptians lament what they see are only two options for the political future of the country: the military or the Muslim Brotherhood. Journalist Kim Wilkinson reports from Cairo on a third movement. 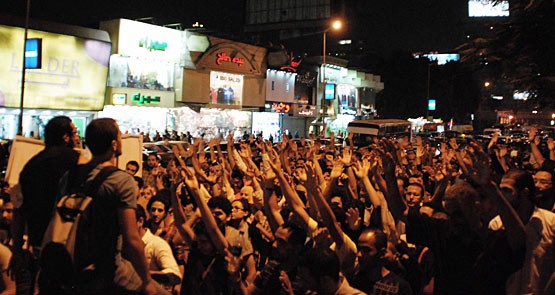 “The blood of every Egyptian is haram,” the protesters chanted as we marched through Mohandessin, Cairo. This chant was soon replaced by cries of “hurriya” (freedom), then the name of a martyr “Gika”, followed by football songs chanted to the beat of a drum as fireworks, like gunshots, exploded in the air. The protesters were against the army, and against Morsi, advocating for a third option in Egyptian politics. In those moments anything seemed possible.

It is common in Cairo to hear Egyptians say “I’m with the army”. Instead, these protesters were saying “the army stole my revolution”, and “we are for goals of the January 25 Revolution”. Many of them labelled June 30 “a coup”.

A spokesman for the movement, Shadi Galal, told me earnestly, “we don’t want to choose between the bad thing and the worse thing”, referring to the army and the Brotherhood. He says the movement is about introducing the idea of a third option to the Egyptian people and gauging the reception. “First we want to say to the people, ‘how about rejecting the Muslim Brotherhood, and how about rejecting the army’,” he said.

The protest included students and professionals, leftists and even some Islamists. I was particularly moved by the story of one protester, 28-year-old Mohammed Gehad, a telecommunications engineer, who lived near Rabaa al-Adawiya. Al-Adawiya is where a pro-Morsi sit-in has been held, and the scene of some of the worst violence. Gehad was despondent: “I’m not able to go to work, everything is bad.” How can he sleep with the protests outside, an incessant soundtrack of yelling and gunshots? “I switch on the air-conditioning and it’s OK, the noise goes away.”

In Gehad’s opinion if the army was to stay “everything will become worse than before Mubarak”.

Many protesters express distress at what Egypt has become. Some lamented that even having a beard could be an invitation for trouble. “It’s very dangerous to have a beard,” said Amr Essam, a 19-year-old student from the American University in Cairo.

My friends had urged me not to attend any protests, lest I be labelled a spy or conspirator, or experience s-xual harassment or worse. But these protesters displayed characteristic Egyptian charm, eagerly answering my questions. But when I asked how the protesters thought their revolutionary ideas would translate in the real world, they seemed unsure. “This is a movement, not a political party,” said Ghadeer Ahmed, a 22-year-old at the protest with her two friends. 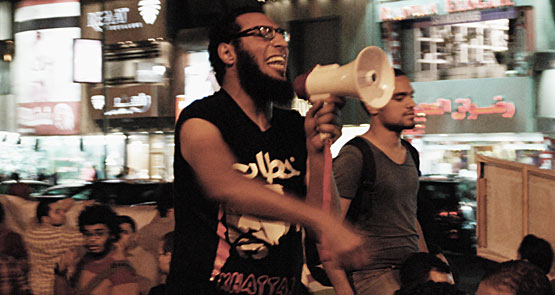 “It’s something in between, not weak, not strong,” Amr Essam said of the protest’s potential. But what about the future, I asked; could this offer Egyptians a viable political alternative? He concedes the nascent movement has the potential to grow significantly bigger.

While the Third Square movement remains small in comparison to the pro-army protests on July 26 in Tahrir Square, and also the numbers of pro-Morsi supporters camped out in various locations around Cairo, it has already garnered over 17,000 likes on Facebook.

The movement has also received criticism on social media. Some have asked: if the Third Square is against the army and the Brotherhood, what do they stand for? One detractor on Twitter wrote:

“Q: How many delusional activists does it take to change a light bulb? A: Enough to fill a third square.”

Tamarod has also come out against the Third Square, claiming the movement aims to usurp the goals of the Egyptian revolution.

From where I stood, as the protesters began to disperse, a phrase a friend of mine uses regularly to describe Egyptian politics popped into my head. It seemed to sum up both the revolutionary potential, and the unknowns of this new movement: the situation is fluid. Now, Egyptians have a third option — it might still be nascent, without concrete political steps to achieving its goals, but it is a space for all those who would be “couch revolutionaries”, who could not bring themselves to slot into increasingly polarised camps.

95% this is the right picture of egypt current situation>