The market stays up as bank shareholders wait for more information on the planned deposit insurance levy. 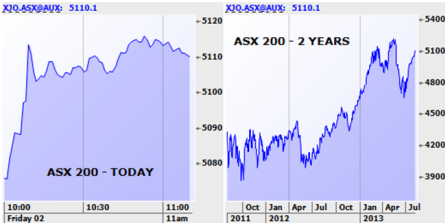 Reasons for the rally include:

Relief that the FOMC ‘tapering risk’ is out of the way.

The better than expected Chinese PMI number yesterday (50.3 versus 50.1 and consensus of 49.8). Comments from the Chinese that growth of 7-8% was still a target.

Some suggestion the rally was as fund managers reinvested after selling down on the last day of the quarter on Wednesday — this is the Dow Jones in the last five days showing the end of quarter sell down.

Hopes that the US Job Numbers tonight will be good after a strong ADP (private sector) employment report this week.

Mario Draghi after the ECB Meeting suggested that the futures market shouldn’t be pricing in a rise in eurozone interest rates and that they intend to keep them low for an extended period of time (the Euro fell).

The Japanese market fell 1.42% yesterday and continues its recent drop. The Chinese market was up 0.18% yesterday, a fairly muted response to the PMI number.

Resources up with BHP up 1.40% and RIO up 1.80% in the US with BHP closing at the equivalent of 41c up on its close in Australia yesterday.

I stopped subscribing to another market pundit because they started including political commentary in to their analysis. Please desist…

Here here, Mark from Melbourne.
I don’t understand why Crikey bothers putting this piece of rubbish in the daily email.