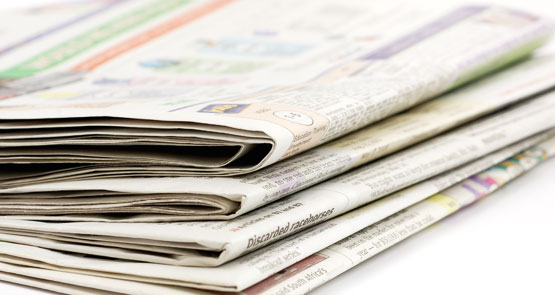 An analysis of the latest SMI data, released last month and obtained by Crikey, shows that metro and national newspapers lost $188.94 million in agency spend for the last financial year, whereas in digital Fairfax and “New News” clawed back just $14.84 million.

In other words, for every $1 lost from newspapers, online news made up about 8 cents, a disastrous “compression ratio” of about 10 to 1.

Factoring in regional press and other newspapers, and the fact The West Australian digital operation is now included in Yahoo!7’s numbers (with no increase on last year), the net loss from the shift to digital from newspapers is at least $164 million over the 12 months to July. 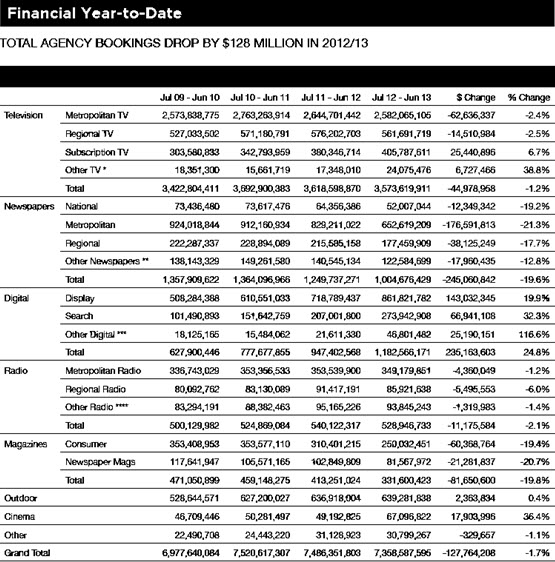 CCZ Equities analyst Roger Colman confirmed to Crikey the analysis is “absolutely right”. “The compression ratio of online advertising to digital collapse is about 10 to 1,” he said.

“And then the next leg is data on time spent actually reading newspaper ads, which in 2012 was only 11% of total time reading compared with a 29% print share of advertising.”

And revenue has been further dispersed by the growth in the number of news players in capital city markets, which have metastasised from the oligopolies of yore into a seven-headed serpent of online players including Fairfax, the government-supported Conversation, Crikey, the News Corp dailies, Guardian Australia, SBS, ABC and Sky News. Three of those outlets are taxpayer subsidised or funded.

Colman says newspaper advertising is set to decline by a further 40% before hitting rock bottom.

The figures back a PricewaterhouseCoopers report released last month that said the broader advertising sector (not just agency spend) will increase by just 2.7% over the next four years. Newspaper ad revenue growth would plunge by 7.5% and magazines would decline by 2.7%.

Concrete evidence of disappearing ads is everywhere. In Wednesday’s edition of The Australian Financial Review, there were just five paid ads in the entire 30-page news section. Fairfax CEO Greg Hywood noted in 2011 that just 20% of online ads go to Fairfax’s bottom line, compared to 70% of the print version.

And in another indication of advertising sickness, it was revealed this week that Fairfax and News’ car ads tie-up, that exploits synergies between Fairfax’s Drive and News’ Carsguide, has taken a further step towards total integration as all Drive dealer accounts are transferred to News. The unusual arrangement, that attracted scrutiny from the Australian Competition and Consumer Commission over allegations of “third-line forcing” when it began at a much more minor level in 2008, could well be revisited by the corporate plod.

There are effectively now only three corporate major players in the auto ads market after the exit of Fairfax and the collapse of the Trading Post — industry leader Carsales, News and the eBay-owned Gumtree.

As a totally impartial observer I would comment that no one I know actually reads the ads on-line. So that 8 cents is a complete waste of money. Maybe the advertising industry should rethink its attitude to hard copy press, because those of us still reading the papers still read the ads too!

Are they the ones you can skip?

Yeah, I never read the online ads; even though I know they are targeted directly at me because of my own ‘click patterns’.
On a side issue: The advertising industry needs to know that I directly counter their ‘brainwashing (conditioning techniques) with every young person I come in contact with. Ad guys + 5, Me = 120. Whoo hoo!

Then there is the issue of advertising being removed from the sites if for example you are looking at The Age online at work for example during lunchtime. I never read or pay any attention to the advertisements.

Perhaps the industry needs to take a good hard look at why online ads aren’t effective. I regularly click through on my mobile to have a look but many of the sites aren’t optimised for the small screen or take far too long to load. If the advertisers concentrated on getting some of these basics right they might find their ads more effective.