The Daily Telegraph has laid into rival Sydney Morning Herald for refusing to run ads for the book Killing Fairfax. Unfortunately for the Tele, Fairfax is running the ads after all.

“They do go on, don’t they? If only Sydney’s worst-selling tabloid had as many fans outside of its newsroom as it does inside, this sort of desperate defensiveness wouldn’t be necessary. The product could speak for itself, rather than speaking to itself.

“HarperCollins rightly takes issue with the SMH’s free speech claim. The publisher sought to take out ads in the paper for a new book, Killing Fairfax, by Fairfax staffer Pam Williams. Fiercely and independently, the ads were rejected.”

That article ran yesterday. If only the Tele scribes had read News Corp stablemate The Australian on Wednesday, they would know that Fairfax has reversed its decision on the ads.

“Book publisher HarperCollins had booked a series of ads in The Sydney Morning Herald, due to start today, following last week’s high-profile launch of Killing Fairfax: Packer, Murdoch and the Ultimate Revenge.”

No Joye on disclosure. Once again someone at The Australian Financial Review has forgotten to add the necessary disclosure to this morning’s commentary from Christopher Joye. This morning’s piece, on the proposed bank deposit levy (which he supports), fails to add the disclosure that exists at the bottom of the online version:

“Christopher Joye is a leading economist, fund manager and policy adviser. He previously worked for Goldman Sachs and the RBA, and was a director of the Menzies Research Centre. He is currently a director of YBR Funds Management Pty Ltd.”

The AFR added a brief version of this disclosure to a commentary in the paper a week or so ago, but not this morning. YBR Funds Management is part of Yellow Brick Road, which is controlled by Mark Bouris, Nine Entertainment and Macquarie Group. — Glenn Dyer

A criminal Photoshop job. The Daily Telegraph is incensed by a Labor plan to introduce a levy on bank deposits, and its design department has created a very bizarre photoshopped image of Kevin Rudd and Chris Bowen robbing a bank. The vaults seem to hold not only money but also cigarettes (in plain packaging, of course), as both $50 notes and cigarette packets litter the floor. 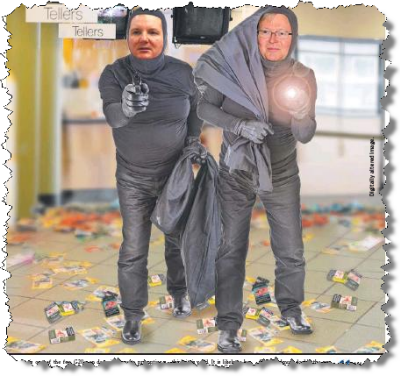 What’s a few billion between friends? Conspicuously absent from The Australian Financial Review this morning was any mention that the paper had stuffed up the bank deposit levy story yesterday in its haste to be “first” to report it. That haste and mistake cost close to $5 billion at one stage as the share prices of the banks fell sharply, which sent the overall market lower in the afternoon. The paper mentioned that the news was reported in its website, but didn’t bother to detail the confusion the first report caused.

The first report mistakenly said the levy would be between half a per cent and 1%, on amounts up to $100,000, which, if true, would have been a real hit. The paper claimed that the levy would raise “over time” as much as the $5.3 billion the new tobacco tax is planned to raise over five years. That caused bank shares to plunge by more than 2%. After hurried scrambling and lots of comments in online media, it now seems the government will reveal a bank bailout deposit tax of between 0.05% and 0.1%, which will raise less than $1 billion over the next four years. The big four banks ended with smaller losses: the CBA closed off 1.09%, Westpac was all but steady, ANZ was down 1.2% and the NAB lost 1.6%. — Glenn Dyer

Video of the day. As Labor releases its plan to raise taxes on cigarettes today, the party has released an attack ad slamming the Coalition for taking money from Big Tobacco. Light up, Tony! 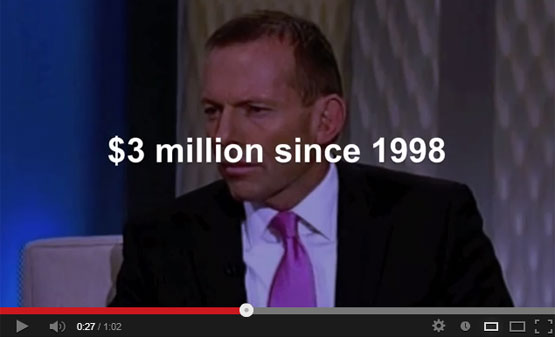 When is the Daily Telegraph going to publish some smut concerning the recent loopert murdak and wifie wendy divorce and toony blair involvement in it all? Maybe mr pies ackerman could shed some tawdry light on the affair.

I’m not sure I understand this: in response to that photoshop is the public actually supposed to be angry that Rudd/Bowen are shafting a major bank? Oops, I appear to be on the wrong planet.

Murdoch’s Limited News Corpse has boned the r out of “media scrum”.

Good to see that Rupert has nailed his colours to the mast with the Weekend Australian and Courier Mail headlines making it clear that no objectivity is intended in its pages in the forthcoming election. Rupert M is for Tony and his toadies running his papers are dutifully carrying out his orders. So much for unbiased analysis in the ‘free’ press….