Live and let pie: the political act of being a reality TV contestant

I am invested in reality television. Ask me anything about the first seven seasons of America’s Next Top Model, and I think it is safe to say I’d know it. I can discuss the ins and outs of Project Runway, Project Runway: Canada and Project Runway: Australia and have quite the hypothesis about the change in production company/quality of the show correlation and […] 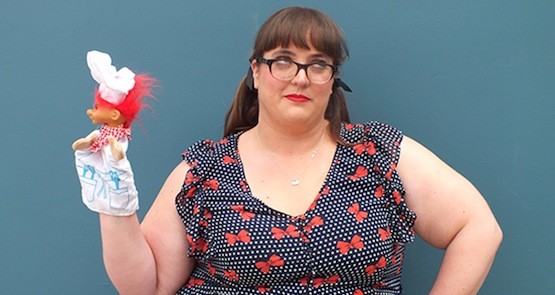 I am invested in reality television.

Ask me anything about the first seven seasons of America’s Next Top Model, and I think it is safe to say I’d know it. I can discuss the ins and outs of Project Runway, Project Runway: Canada and Project Runway: Australia and have quite the hypothesis about the change in production company/quality of the show correlation and how they’ve attempted to fix that. And I’ve cried more times than is probably normal during Edwardian Farm.

In an attempt to wean myself off the amount of reality television I was watching, I started only watching shows where the contestants had a discernible talent — cooking, sewing, designing, being adorable history nerds — and this is where I discovered The Great British Bake Off. To say that I was enamoured of the show is understating it. It seemed so ridiculous to me at first that I literally watched the show in secret: “Um, yes, a bunch of miscellaneous amateurs meet in a marquee and bake things and it is all very serious. Many cups of tea are involved.”

I grew to love the show, discuss the show, watch every single other thing that presenter Sue Perkins had ever done ever and be creepily evangelical about the show. People would innocently come to our house for a cup of tea and would leave having watched an episode with me and having listened to me discuss the history of the digestive biscuit. And my sermon would usually end with something along the lines of: “If they made an Australian version of this show, I would audition. Fact.”

So when a friend pointed out that not only were they making an Australian version, they were auditioning, I felt like I had to do it. And I wanted to do it. I love baking. I love cups of tea. I love bunting. And I love reality television.

At no point did I think I’d be cast. I’m a mouthy fat lesbian feminist with a kid. We aren’t on the telly box that regularly, and that’s a crying shame. Because there are a lot of us. And lots of other kinds of people who don’t get seen on TV that often.

I knew I could be good television if they wanted to go that way. Not in the “I’m not here to make friends, I’m here to win!” way. In the “here is a somewhat interesting person who we can make an excellent ad out of because she has a point of differentiation” way. I’m also not completely naive. I did media studies at uni. I’m a media teacher now and I’ve watched enough of these shows to be aware of how edited they are.

So when — after an online application and two auditions and talking to a psych and submitting various test recipes — they told me I’d made the show, I was a bit taken aback. I found myself facing a conundrum: do I want to risk being edited into the jolly fat lady/butt of the joke, or do I want to do it anyway for all the mouthy fat lezzers who don’t get to see themselves represented in these sorts of shows?

I was still holding my breath, waiting for the other shoe to drop six months later when we finally got to see it. The production was exceedingly kind to me.

When I was first started to get political (and I’m talking about body politics here) — when I was thinking that maybe the 15-odd years of being dissatisfied with my body and on-and-off dieting and general self-hate wasn’t healthy — there wasn’t anyone like me on television.

Which is not to say that there haven’t been fatties on reality shows before. Hell, there are whole shows dedicated to torturing/policing/making fat people “healthier” (for healthier, read “skinnier” and no longer taking up precious space with the fatness) through unsustainable exercise and eating plans. And the fatties who aren’t on The Biggest Loser or similar are, on the whole, expected to be apologetic for being fat. I’m not that person. I am also, by no means, a perfect fat person, but I refuse to apologise for taking up space.

I think if I’d been watching the show six years ago I would have taken great comfort in seeing me, the fat queer girl with a penchant for florals and comic books, on the screen.

The healthiest thing I ever did was to take a breath and decide to enjoy the only body I’m going to have because it’s strong, it’s fabulous and it contains me. I got there with a little help from Kate Harding — whose piece The Fantasy of Being Thin spoke deeply to my experience — but maybe I might’ve gotten there a little sooner with somebody like me peering out from behind a KitchenAid during prime time.

I tried to be myself. I thought of the strange loveliness of Austin Scarlett from Project Runway and On the Road, Carla Hall from Top Chef, or Mary-Anne Boermans and every single other contestant on The Great British Bake Off. They all seem like real people with likes and dislikes and foibles that some people (me) find endearing and other people (apparently the rest of the internet) find annoying. I took heart from them.

I did what I would have done even if there hadn’t been a huge (and amazing) crew there watching me. I made terrible baking puns that didn’t make it to air, thankfully. I drank approximately 100,000 cups of tea, which also didn’t make it to air, sadly. And all of that’s not to say that I wasn’t aware every single time that I talked at a camera that this would be edited in some way to make TV Sara-Jane. You can’t help but think about how something might sound in the edit — will this be taken out of context and shown again and again? How do I bend over in this dress without continually flashing everyone? The cognitive dissonance of wanting to be Actual Sara-Jane but worrying about TV Sara-Jane made for a strange experience.