The government has unveiled its pre-election mini-budget, aiming to raise revenue and cut spending to return to forecast by 2015-16. But it's going to be a painful journey.

The government has unveiled a pre-election economic statement that downgrades growth and revenue forecasts and resumes cutting spending in an effort to meet Labor’s commitment to return to surplus in 2015-16.

The statement anticipates a further downgrade in revenue of $33.3 billion  over forward estimates, driven by a significantly softer economy. Unemployment is expected to peak at 6.25% this financial year and next, 0.5 points higher than forecast in the May budget. Inflation is likely to be slightly higher this year but a little lower next, and GDP is expected to be softer, at just 2.5% in 2013-14, rather than 2.75%, taking growth well below trend. However, the biggest change from the budget point of view is a dramatic downward revision of nominal GDP growth, from 5% in the budget to 3.75% this year and from 5% to 4.5% in 2014-15.

To offset the revenue falls, the government has announced $17.4 billion in spending cuts and tax rises, but only to apply from 2015-16 onward, preferring to let revenue write-downs flow through without commensurate savings this year and 2014-15. As a result, the expected budget deficit for this year —  mooted as late as December to be in surplus — has blown out to $30.1 billion. The deficit for 2012-13 will come in at $18.8 billion, a little better than forecast. However, the return to surplus has been delayed a further year, to 2016-17, with a $4.7 billion deficit now expected in 2015-16. 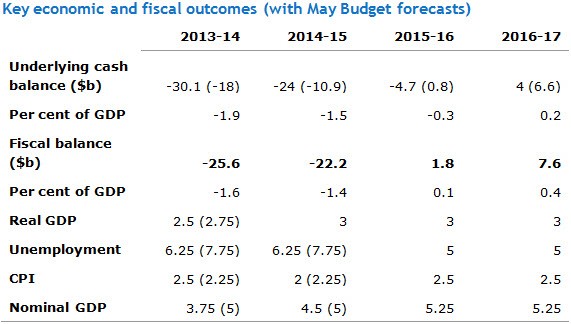 The key savings and tax increases are:

The government has also left itself a modest election warchest of around $1 billion in measures not yet announced, albeit with some large savings yet to be revealed.

The government has also unveiled the cost of its “PNG Solution”, expected to cost $632 million over four years, including  nearly $200 million in capital to expand Manus Island. In addition, PNG will also receive an additional $420 million in aid over four years, primarily in health, law and order and education.

Every time the government increases the inbound tourist visa charges there is a down turn in inbound tourists. We charge some of the highest visa fees in the world and we need every tourist we can get so where is the logic.

This is quite a clever budget pea and thimble trick. Sanjay should not worry so much about the Visa fee increase since the OZ$ is likely to be down and the Visas for many overseas tourists will remain much the same in their currency. Fretting over the one year delay is pointless. The time to turn up surpluses is with good growth. 3% might have become that, as the OZ economy will have grown by about 20% since the GFC in 2 years time and the amount of growth from 3% of a 20% bigger economy is about the same as 3.5% today. Bigger rates of growth should e allowed to send the surplus up

Why did they touch the apprenticeship scheme???

Agree – let’s lean to a growth budget, rather than austerity drive.

Labor is killing business and consumer confidence, with their hare brained tax grabs.

Notice how JIMMY has disappeared, I was right, he was in Gillard’s PMO – I suspect Jimmy from Scotland!!

We’re in a Global Financial Crisis and these clowns were still predicting growth of 5%? And 4.5% next year?

And haven’t we had to put up with these idiots warning us about Abbott’s “horrible cuts” and now… FBT? You’re cut. Apprenticeships? Cut. Public service? They’re cut. Smokers? We’re gonna Tax those losers!