With a lineball election, Tony Abbott has moved to neutralise a key issue that was hurting the Coalition. All that rhetoric attacking the Gonski education reforms was for nothing. 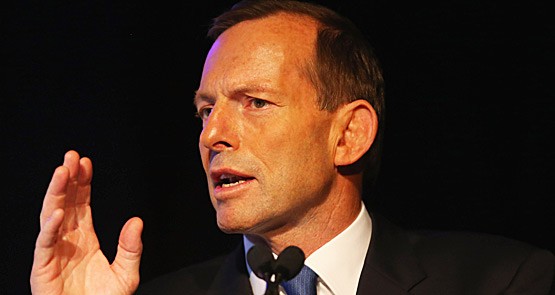 The Coalition has opposed what used to be called the Gonski education funding reforms right from, almost literally, the moment they were released — the opposition’s education spokesman, Christopher Pyne, famously didn’t even bother reading the initial report after it was released before emerging to attack it. And it was only a few weeks ago that Pyne was assuring one and all that the Coalition would repeal the government’s education funding reforms before the end of the year. The Gonski funding reform model was a “Conski”, Pyne declared in April. And NSW Premier Barry O’Farrell had been “conned” by former PM Julia Gillard into signing up.

Well, forget about all that: the Coalition has surrendered, unconditionally, on education funding, announcing this morning it was adopting Labor’s funding process entirely.

The Coalition had begun shifting a couple of weeks ago — or, more correctly, the ground had started shifting under it. Faced with the impossible problem of doing what Pyne had so blithely declared would happen — the repeal of Labor’s funding model by the end of the year in favour of maintaining existing arrangements — the Coalition had said it would retain the Labor model for a year and then “review” it and renegotiate funding with the states.

That conjured the amusing image of Pyne trying to negotiate with O’Farrell for a decrease in funding for NSW schools.

It also illustrated the core problem facing the Coalition: Pyne might have been an excellent manager of opposition business, but in the 18 months since the release of the Gonski panel report, he managed to produce no education policy beyond opposition to Gonski. Where one might have expected an alternative, there was only a huge blank spot and serious questions for the states and private schools.

The other problem was that voters strongly supported the Gonski reforms — support was 68% earlier in the year, according to Essential Media. And education is routinely in the top three or four issues on which voters say they base their decision on how to vote.

Abbott’s surrender is thus designed to neutralise a key issue on which the Coalition trailed Labor, and one that, at least according to what voters say, is influential in their voting decision.

So all that rhetoric attacking the Gonski recommendations, all the febrile attacks on Labor over it, that’s all now to be forgotten: the Coalition will “match Labor dollar-for-dollar over the next four years”.

“Kevin Rudd and Julia Gillard have made a mess of their attempts to deliver the ‘Gonski’ reforms,” Abbott said this morning in a media release. In fact, as his surrender demonstrates, both Gillard and Rudd had deftly positioned the federal Coalition as the opponents of greater equity and efficiency in education funding.

Funny what happens when an election you thought was in the bag is suddenly in the balance.

Gillard and former education minister Peter Garrett, both of whose political careers are probably about to formally end if Kevin Rudd goes to Yarralumla this weekend, can enjoy some belated — but total — vindication.

Congratulations Julia Gillard – you did it!

Presumably this will guarantee that the remaining states will sign up too.

Elvis: I doubt it. Not all Tories are bastards, but all bastards are Tories.

I’m with Elvis.
Hail to the Firefox.

It just shows what a lazy vacuous bunch the coalition are if they had assisted the passage of this reform instead of naysaying it they might have managed to retain Gillard as PM .
Where are the Policies they should have been working on the past three years instead of hanging out with the lunatic fringe under ditch the witch placards.. Well the witch has been ditched and they don’t appear to have a plan for this contingency… or an education policy or a health policy.. its all policy to the Node.. they are a bunch of rolled gold fukwits..

I join the other posters in congratulating Mr Gonski and Labor for this achievement. Hopefully the inconsistencies and limitations of the arrangement will be remedied by the next Labor Government.

But as Dean Ashenden has informed Crikey readers, even full Gonski isn’t the end of reforming school education, but removes a big impediment to starting to improve school education, as distinct from its funding.