Peter Ryan’s past. Troubled Victorian mortgage fund Gippsland Secured Investments Limited (GSI) has had to freeze withdrawals and deposits, and says it might not have enough equity to pay for the drop in its asset value. That leaves 3500 investors — and $150 million — in limbo. A little mole passed on a newsletter from GSI in happier times in 2010 — and whom did we spot? 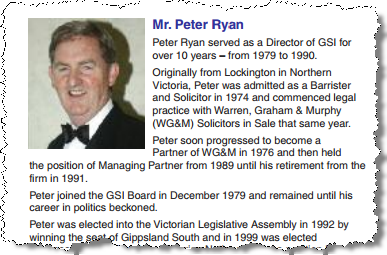 Ryan has been trying to help sort out the regional non-bank lender’s travails, taking part last week in a phone hook-up with local business leaders who have offered to bail out GSI. The Age wrote on that hook-up but didn’t mention Ryan’s past association with the company.

Tony Eastley unplugged. Tips was delighted to hear the secret inner thoughts of smooth-voiced ABC AM host Tony Eastley this morning. Eastley threw to a very serious report about reductions in deaths from breast cancer, but his mike remained on. He let us know what he thought of fellow reporter Martin Cuddihy — saying he was a menace who should be thrown out of the RN control room — and treated us to various other ruminations. Fortunately for Eastley (and Cuddihy) the good-humoured host appeared to be joking. While we’re on Eastley, we do enjoy his awkward attempts to banter with head host Fran Kelly.

Film faux pas. The Melbourne International Film Festival is underway, and fans were queueing up to see last night’s Australian premiere of the Italian-made Geoffrey Rush film The Best Offer at the glamorous Forum Theatre. MIFF punters are usually strictly told to turn off their mobiles. So what happened?

“There was a guy in the front row checking his messages on his smartphone through the movie. It was the film’s acclaimed director, Giuseppe Tornatore, who’s presumably seen it a few times. But distracting for those sitting behind him!”

A tale of News Corp twins. One of the newly divorced Murdoch twins, 21st Century Fox, is due to release its first ever earnings report as a broadcast, film TV cable content generator and distributor next week — at 4pm August 6 in the US and 6am August 7 here, with a teleconference to follow half an hour later.

Over at the other twin (the ugly one) called News Corporation, there’s no such advance advice to the market. Its website merely says “details on upcoming events are not yet available.” The absence of any advance warning on the timing of the earnings relief from News Corp is very un-Murdoch like. The old News Corp usually gave several weeks’ notice. Could this mean that the bean-counters at News Corp are struggling to get their numbers “right” for the release? We already know there will be impairment costs of between $US1.2 billion and $US1.4 billion in the Australian newspaper operations, and that revenues have been sliding for 21 months or more. Rupert Murdoch is executive chair of both companies, and his two sons, Lachlan and James, sit on both boards. We’ll keep you posted.

Like to pee on Milne’s tree? Greens leader Christine Milne is pretty handy on the Twitter and Instagram (gardening is a major focus of hers), but she may get more than she bargained for with this snap from this morning captioned “Not just promise of spring but reminder lemon tree needs feeding”. Let’s hope kindly neighbours don’t pop around to provide some home-grown fertilisation … 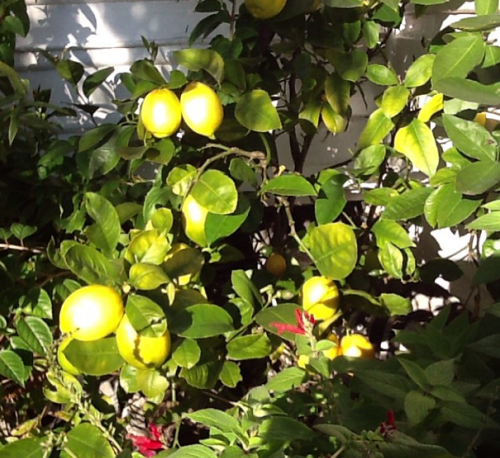