The Business Council's call for economic reform betrays a business mindset that it should be the passive recipient of government help. Bernard Keane and Glenn Dyer interpret the document. 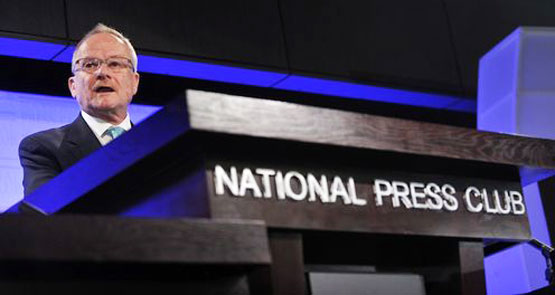 The Business Council’s “Action Plan for Enduring Prosperity”, we were told yesterday upon its launch, was an Important Document. The BCA had “done the nation a favour”, said The Australian. The Australian Financial Review gave the report extensive coverage. Today, inevitably, it’s dropped out of the media cycle entirely.

But for once the Oz is correct — the BCA has done us a favour, by revealing so plainly its self-interest, its intellectual shallowness and its hypocrisy.

Let’s start with the good bits. The BCA makes a strong case for a continuing, substantial immigration program and flexibility for labour on temporary visas (and, in passing, identifies rhetoric on refugees as threat). It stresses the importance of investment in education and training and directly backs — without mentioning the politics of it — Labor’s education funding reforms. It calls for a “shift away from a focus on government subsidies and expenditure, toward a systematic approach to innovation”. It urges governments to fund infrastructure through user charging, especially in transport, and says that the Commonwealth shouldn’t be afraid to use long-term debt to fund infrastructure, a statement of the bleeding obvious but one that’s now almost heretical in Canberra.

It directly calls for an increase to the Newstart allowance “to ensure a minimum decent standard of living for those temporarily without adequate personal resources”. And it castigates our current, deeply obscure, regulatory processes for foreign investment.

Then there’s — forgive us doing it out of order — the ugly bits. The document is littered with all sorts of irrationalities and inconsistencies. The call for borrowing to fund infrastructure sits oddly with the call for fiscal discipline and a proposed national audit to investigate cutting the size of government. Many of the “action items” are absurdly vague — the best being an action item for “a vision of sustainable urban growth”. The BCA complains about too many prescriptive Commonwealth-state payments, then proposes “a new system of National Productivity Payments” and a “long-term infrastructure funding agreement”.

Much of the report appears to have been written months or even years ago, recommending a number of things that have already been done by the government.

Indeed in one instance it urges something that the BCA specifically criticised when the government did it; calling for laws to “encourage more flexible work arrangements and supportive cultures for working parents and improve the flexibility of hours that can attract Commonwealth childcare subsidies”. When the government earlier this year announced a small change to require employers to “consider” requests for greater flexibility for workers who are parents and carers, the BCA criticised it.

Then there’s the plain bad. The biggest hurdle for the report was always how it handled the disastrous rise in labour productivity over the last 18 months — disastrous from the point of view of business, whose complaint that the Fair Work Act stifles productivity and needs reform has been entirely discredited. The only appearance of labour productivity is when the BCA calls for “restoring labour productivity growth to 1.5 per cent per year” — despite the fact that in the year to March 2013, GDP per hour worked grew in trend terms by nearly a full point more, 2.4%.

And it’s not as though wage costs have been a problem for all but the resources sector (and even there, wages are falling as the boom slows). Wages growth has been falling in the past year or so, at a time when labour productivity has been picking up.

“It betrays a core problem of Australian business, a worldview that it’s governments that deliver things like productivity and trade opportunities.”

Then there’s its call for tax reform. Despite pages of discussion, the BCA’s tax proposal boils down to this: business is paying too much tax, and the rest of us aren’t paying enough, so the GST should be increased and the corporate tax rate dropped to 25%. “Business tax concessions should be re-examined,” the report adds blithely. Well, the government did investigate tax concessions last year — got a business working group to look at it, in fact. And what happened? The miners jacked up so much that the idea was killed off. As the Business Tax Working Group drily noted in its final report last year, it had “found it difficult to identify support for measures that would further broaden the business tax base”.

The BCA also calls on the government to “participate in global discussions on international tax issues, including around base erosion and profit shifting, through our participation in the G20”. Participate. But not actually do anything — “Australia should not seek to be a world leader in combating base erosion and profit shifting”. Seems the BCA is gung-ho on Comprehensive Tax Reform and being world-class in economic matters — as long as it doesn’t harm any businesses.

The other thing that’s missing is an awareness by the BCA of how the economy, and consumer behaviour, has changed since the financial crisis. Reserve Bank Governor Glenn Stevens gave yet the latest of a number of speeches about this on Tuesday.

Stevens’ central point is that we (Australian consumers, business, unions and government) can’t expect the pre-GFC good times to return any time soon. Consumers are back to their historic level of caution, saving rather than spending madly, and consuming in different ways. “It is even clearer now than it was two years ago that the behaviour of households has changed in a very important way,” Stevens said. “The slowdown in asset values has been associated with a lift in saving and a slower path for consumption, which has had important implications for the economy.” He went on:

“[S]ome strengthening in consumption from recent rather subdued growth rates is a reasonable expectation, but we should not expect a return to the sorts of growth seen in the 1995–2007 period. Nor, surely, should we try to engineer one, at least on the back of borrowing.”

That business believes that whatever is good for business is automatically in the national interest will surprise no one: whether the BCA’s Jennifer Westacott or Tony Shepherd actually believe this, or are simply being disingenuous, is a matter for them. But what’s fascinating about the BCA report is its broader tone that Australian business will only prosper if governments and the community deliver “reform” to it.

Even on issues such as the need for greater global engagement by Australian business, the BCA is all about what government can do — most particularly, remove restrictions on 457 visas. Action 6.8 is “we should establish high-level CEO dialogues with emerging economic partners in the region”. As the joke goes, who’s “we”, white man? Why hasn’t the BCA done this already?

In the end, the report is a vast, passive-aggressive economic fridge note. “Reform” is what everyone else can do for business, even when it’s business itself that is failing to do basic things like engage with key trading partners. It betrays a core problem of Australian business, a worldview that it’s governments that deliver things like productivity and trade opportunities. And even when politicians deliver what the BCA wants, they get no credit.

Agree, from my skimming thru the report and reading closely the couple of pages on tertiary education. The report also seems to ignore the data it publishes which doesn’t support its argument.

Interestingly, the report didn’t argue to privatise everything. There is much more scope to privatise tertiary education which the report missed, or p’raps the BCA has given up on this clearly failed policy.

Westacott on The Business last night? I love seeing her given these opportunities for self-promotion of her ideal world, as the free marketeering Business Council of Oz chief too, allowed to run off with her usual “Dissertations on All Consuming Self-interest”.
“Viva lower wages!” – we can’t afford their idea of “high” ones “in these dire, for industry and profits times”, or any other time?
If only she and the rest of these free-lunchers she represents, were paid by their “productivity levels”?

And this is why capital productivity is in decline in this country.

I noticed the productivity growth chart accompanying the BCA’s article in the Oz stopped at 2010/11. I guess recent figures didn’t support the argument so they were left off. Good on Crikey for keeping us informed on this issue because the mainstream media don’t seem to be able to.

Sounds like the report was a pile of drivel.

But hey, it wasn’t so bad, when u consider it was prolly written by an unpaid intern.