Channel Ten will be airing a new season of So You Think You Can Dance, bringing the number of related-party dealings between the Murdoch companies to new levels.

GetUp! in the stunt business. Now hang on a minute, business lobby, you want to cut the company tax rate by 5%? And cut the minimum wage? And wipe out unions altogether? This full-page pitch in The Australian today seems a bit rich … 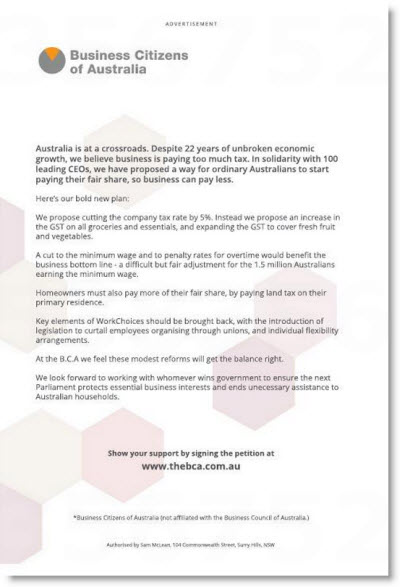 But look more closely. That’s not the Business Council of Australia, which released its slightly more modest budget proposals yesterday, but the “Business Citizens of Australia” — that is, another stunt from GetUp!. The lefty activists confirmed to Crikey they were behind the expensive ad. “The Business Council’s vision for Australia is an unrealistic wish-lish designed to make life easier for big business by putting more pressure on families through more expensive groceries and houses and less rights at work,” national director Sam McLean (who authorised the above ad) said. “We’ve had 22 years of unbroken economic growth. It’s extraordinary to see the Business Council crying poor on behalf of its members, many of which are foreign-owned multinational companies. It’s a parody. We figured the BCA has a sense of humour. After all, their policy suggestions are a joke.”

At any rate, it’s good news for The Australian to snare the revenue from this full-page ad — even if it’s in defiance of the paper’s pro-BCA editorial line. — Cathy Alexander

Free pass at the AFR? In a stirring editorial this morning, The Australian Financial Review rightfully laid into the Labor Party and its culture in the wake of the Independent Commission Against Corruption findings of corruption against Eddie Obeid, Ian Macdonald and others. AFR journo Neil Chenoweth had a nuanced view of the findings in a very good two-page special headlined “How the powerful were caught by their own cover-up“, and the paper’s front page pictures all eight people named adversely in the findings; two Labor figures and six businessmen, including John Kinghorn, the founder and seller of the worst-timed float in history — RAMS home loans back in 2007, a couple of weeks before the GFC erupted. Kinghorn made more than $600 million and the buying in shareholders lost a motza.

Some of the businessmen face potential problems with ASIC for over disclosure of parts of one of the deals — the AFR, ostensibly the business paper for the country, omitted that in its editorial. The AFR also failed to mention that in October last year; the paper published a cover story very favourable to Kinghorn, “No regrets: Kinghorn gives away $300 million“, detailing his charitable giving.

The AFR‘s fawning treatment of Kinghorn last October was given a prominent mention in the CBD column in the business pages of The Sydney Morning Herald this morning by Ben Butler. That was a courageous move given that the Fin is on track to take control of those pages, according to reports out of Fairfax after Brett Clegg departed for News Corp and was replaced as head of the business group by Sean Aylmer. — Glenn Dyer

Ten pirouettes. The Murdoch family benefit society (aka the Ten Network) has announced Shine Australia (the key non-Fox TV production arm of the empire) will produce yet another series for the embattled network, which will increase the related-party dealings between the Murdoch-dominated companies to a new level. Shine will produce a new series of So You Think You Can Dance in 2014, even though Ten cancelled it after three weak seasons from 2008 to 2010.

Shine, which is owned by 21st Century Fox, the TV, film, cable and satellite side of the old News Corp, already produces the weakly performing MasterChef for Ten and the equally weak The Biggest Loser. Shine also produces TV programs for other networks, but its biggest client in Australia is Ten, which is 9% owned by chairman Lachlan Murdoch. The previous three seasons of So You Think You Can Dance were produced by FremantleMedia Australia, but Shine (which is run by the former heads of FremantleMedia) now has the franchise. Ten hasn’t had much success with dance programs. Everybody remembers the three-episode failure in 2012 known as Everybody Dance Now that was produced by FremantleMedia Australia and was hosted by Sarah Murdoch, Lachlan’s wife.

This deal will produce more income for Shine Australia and its US owner, 21st Century Fox. In 2011-12 related party transactions associated with Ten directors Lachlan Murdoch, James Packer, Gina Rinehart and Jack Cowin were involved in related-party transactions totalling $125.5 million, up from $72.9 million the year before. The dealings between Shine and the Fox TV business in the US (which is one of Ten’s major program suppliers) accounted for the majority of that $125.5 million figure. — Glenn Dyer

Video of the day. Our favourite American politician, former congressman Anthony Weiner, says he won’t quit the New York mayoral race just because new pictures of his junk and further allegations of grooming, s-xting and online affairs have surfaced. “Quit isn’t the way we roll in New York. We are a tough city, we fight through tough things,” says Weiner to camera, all but explicitly making comparisons between his crotch shots and 9/11. 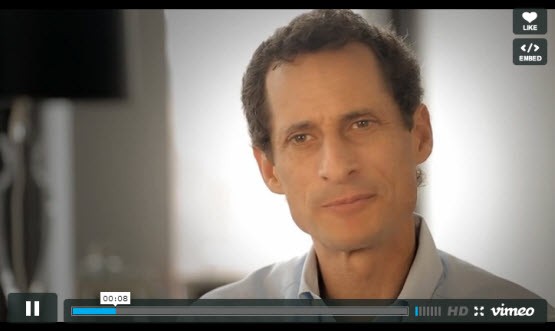 One wonders what it would take to sufficiently embarrass Weiner – if possible. The expression ‘a hide like a rhino’ was crafted for this man.

“The Biggest Loser”? Is that the one about “News Corpse”?