Manning and whistleblowing in an age of persecution and indifference

The indifference of the US media to the case of Bradley Manning hasn't prevented him from exposing the security state or influencing other whistleblowers. 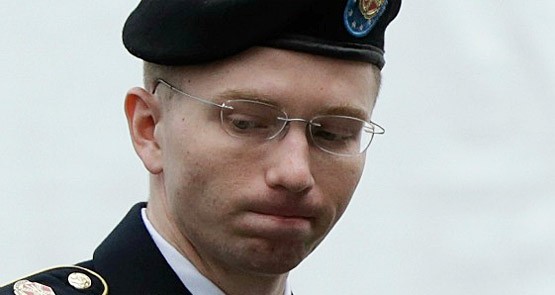 So US Army private Bradley Manning didn’t “aid the enemy”, according to his military judge. Why, we don’t know — we haven’t seen the judicial reasoning yet. It might be that the charge itself — that publishing anything confidential that happens to be seen by someone with whom the United States is at war falls under the Espionage Act — was regarded by Judge Denise Lind as absurd. Or she might regard the charge as appropriate, but not proven, in Manning’s particular case.

That has, however, allowed nearly all of the US mainstream media to get on with ignoring the Manning case, something they’ve done since word that he’d been arrested leaked out in 2010. The trial was conducted at Fort Meade, in Maryland, not too far from Baltimore-Washington Airport — not exactly difficult to get to for the east coast US media, but mainstream media attendance at a trial at which the media was an unindicted co-conspirator has been scant. Independent journalists like Alexa O’Brien who have attended have been subjected to absurd and highly restrictive conditions.

Manning was, however, found guilty of “wanton publication”.

“Wanton publication” is a charge invented purely for this case by the US government. Go and google it — the only existence of the phrase before Manning’s trial was in the 19th century when “wanton” was used in a different and more lascivious sense. If journalists, American or otherwise, think it’s a relief that a whistleblower wasn’t deemed to be “aiding the enemy”, they ought to wonder exactly what “wanton publication” could amount to.

And, yes, Manning is a whistleblower. For all the efforts of WikiLeaks’ critics, and those who so passionately loathed Julian Assange that anyone indirectly linked to him became a target of contumely as well, to suggest Manning simply tipped gigabytes of secret material onto the internet — indeed, published them “wantonly” — bear in mind what he revealed. He showed us war crimes, demonstrated by the “Collateral Murder” video (in relation to which, the only person to be jailed has been Manning), a video Reuters had been trying to obtain through freedom of information for years; he gave us the Iraq war logs, which revealed the horrific official body count of the invasion and occupation of that country and abuse and torture by US forces; the Afghan war logs, which revealed instances such as US contractors engaging in child trafficking and special forces operations inside Pakistan that had been denied by the US government; and, in painfully embarrassing detail, the systematic use of the State Department around the world to engage in espionage, promote the interests of US corporations at any cost and support regimes that even the US acknowledged were corrupt.

How many people died as a result of Manning’s revelations? The US government initially claimed he had placed large numbers of people in danger around the world. But under oath yesterday at Manning’s sentencing hearing, Brigadier General Robert Carr, who headed the taskforce investigating the impact of the WikiLeaks material, admitted that after exhaustive work the taskforce could find no one who had been killed or injured. One of his former subordinates, however, claimed that there had been “some unpleasant comments directed at me and at the US” by allied officials.

Indeed, as former defense secretary Robert Gates said, the harm alleged to have ensued from the documents’ release was “significantly overwrought”.

Why the prosecution for espionage, the attempt to establish that good journalism could be treason, the psychological torture and physical abuse of Manning during his incarceration? It’s all designed to send a powerful signal to any other whistleblower who might be tempted to reveal war crimes, or torture, or the actions of diplomats serving as corporate shills: this is what will happen even if you merely embarrass us.

The pursuit of NSA whistleblower Edward Snowden and the increasingly bizarre attempts by the United States to secure him, including having the Bolivian President’s plane forced down, and assuring the Russians the US wouldn’t kill or torture him if they handed him over, serve the same purpose, as have the pursuit of Fox and Associated Press journalists. As I’ve explored previously, this form of exemplary punishment is consistent US policy, especially in relation to online activism.

Perhaps this aggressive pursuit and persecution of whistleblowers — and the Obama administration has pursued unofficial leakers more aggressively than any previous administration, and indeed more than all previous administrations combined — has deterred some whistleblowers from speaking out. It didn’t deter Snowden, who knew exactly what fate awaited him when he decided to reveal the extraordinary extent of secret US internet and telecommunications spying. He went ahead, kicking off a debate that, inter alia, brought the House of Representatives within a few votes of choking off NSA funding, caused the author of the Patriot Act and many other congressional figures to declare that the surveillance exceeded the legal authority provided by Congress, and resulted in the establishment and libertarian wings of the Republican Party hurling abuse at each other over whether surveillance was justified.

Snowden’s revelations didn’t emerge through WikiLeaks, but through the mainstream media — The Guardian (albeit via Glenn Greenwald, who has been pursuing these issues for years in other media) and The Washington Post. Such is the Stockholm syndrome prevalent in parts of the US media that the Post‘s role in breaking the story was criticised by its own editorial board, while other journalists appeared to endorse calls for Greenwald to be prosecuted.

Given those extraordinary reactions to a story that has prompted such extensive debate in Congress, the US media’s lack of interest in the Manning case, even when it involved such high stakes for them, starts to become clear.

Even so, whistleblowers like Manning and Snowden — heroes both — have exposed the security state in all its absurdity and horror, both in their revelations and in their subsequent treatment, whether the US media wants to know or not.

As for aiding the enemy, that was only part of the US govt’s concern. Manning did the unforgivable by affording an ugly insight to not only his countrymen but to US allies.

Manning showed unusual maturity in recognising the wrongdoing he saw for what it was and taking action about it. None of the participants in the “collateral murder” video, for example, appear to have demonstrated contrition or remorse in public.
The reports we read of Manning’s mistreatment in the long period leading up to his trial sickened me, but his treatment appears to be so normal that all we can do is express disapproval: charges and prosecution of those who ordered, committed and condoned his mistreatment are mentioned nowhere. Punishing prisoners before they are tried is so commonplace in the US that it escapes comment.