ABC sets audience targets, but does it have <em>The X Factor</em>?

ABC journalists have been set audience targets, whether they know it or not. Is this about making sure the national broadcaster is producing what we want, or dumbing down Aunty? 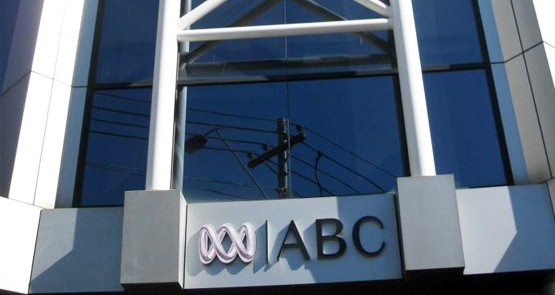 ABC reporters have been exhorted to lift their game in order to meet formal audience targets — prompting veteran journalist Quentin Dempster to warn the push could lead to “ambulance chasing and police rounds” at the national broadcaster.

Crikey has obtained an email from the ABC’s NSW news editor Don Lange to staff, outlining the targets and instructing reporters how to meet them. The email has sparked resentment among some staff, who argue the ABC should focus on quality rather than ratings.

If the ABC wants to ramp up audience share it may need to change tack. The show with the most viewers nationally on television last night was talent quest The X Factor on Seven. Nine News consistently outrates ABC News, and A Current Affair won more viewers last night than 7.30. 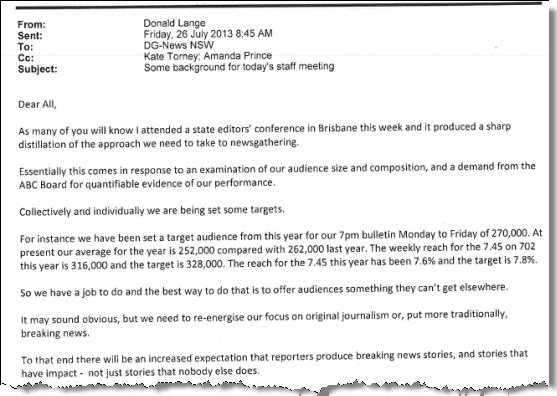 It appears that the ABC has had audience targets for some time, but has not tended to pass them on to journalists, or keep them posted on whether targets are being met. This is all set to change.

Dempster, who has worked at the ABC for 20 years, hosts NSW Stateline and is the former staff-elected ABC director, penned this blistering epistle to Crikey in response to Lange’s email:

“Don Lange’s a top ABC news producer but everybody was bemused by his memo. We have yet to hear any critique directly from the ABC board about the alleged deficiencies of current operations.

“We’re all in favour of increasing the audience through original news-breaking journalism and scoops. That takes investigative legwork, increasing specialisation in the field and developing trusted informants. You don’t get news-breaking scoop journalism from a battery farm of journalistic desk jockeys servicing the relentless content demands of  24/7 continuous  broadcasting. Don says this quantitative benchmarking is coming from the board. Maybe chairman Jim (Spigelman) can drop us a few news tips from all his network of informants in the NSW Supreme Court and Australian and Hong Kong legal circles: confidentiality assured under the code of ethics, Mr Chairman.

“To build the ABC’s influence in online we need to throw a lot more resources at journalists who stay in the field until their sources and informants become major news-breaking assets which over time will make us competitive and in fact transcend our rivals. We need more specialists.

“Increasing ratings is easy: ambulance-chasing and police rounds. Just watch Channels 7 and 9 at 6 pm. They have a tried and successful formula.

“I know Don and the board don’t mean this, but the back-hander implicit in Don’s memo is hurtful to all those striving to deliver original journalism with the time and resources we currently have.”

Chris Warren, federal secretary of the journalists’ union (the Media Entertainment and Arts Alliance), also expressed disquiet at the targets. “Our general view is that the job of the ABC is to produce quality programs within the obligations of the [ABC] Charter with the funding made available,” he told Crikey.

Most ABC reporters Crikey spoke to were not aware they had been set audience targets, and certainly didn’t know what they were. “I’ve never heard of anything like that before,” one radio producer said. But Alan Sunderland, head of policy and staff development at ABC News, says they’re nothing new. “The ABC has audience targets across all of its platforms and all of its content areas,” he said, adding all states had a range of targets, including audience targets.

Sunderland says audience targets are just one part of the many ways the ABC measures the job it’s doing, including monitoring editorial quality and audience appreciation. He provides a robust defence of the targets.

“We have never chased higher audiences at the expense of quality, we are not proposing to do that now and we never will,” he said. “What we are doing is focussing on fulfilling our charter obligations to produce independent, quality journalism, and then we are trying to ensure as many Australians as possible get to see, hear and read that content.”

Sunderland says the ABC is reforming its “newsgathering structure” in order to focus on quality and “original, relevant journalism”. He says it would be wrong to deduce that ABC news staff aren’t happy with the push to improve the quality of the ABC’s journalism and communicate it to as many people as possible.

Crikey understands ABC management intends to more clearly communicate with staff around the country about what their audience targets are.

For starters there’s been the tabloidization of Queensland’s TV news.
“Just lie back and think of the Murdochracy.”

I no longer bother with Qld’s ABC TV news, it’s more about appearance and less about content. In general, the launch of ABC24 has been detrimental to the quality of news reporting.

I for one would like to sea topless page 3 girl introduced on the web homepage. Perhaps they should set up a phone hacking department, specialising in hacking dead childrens phones. Then they could hire pro$titutes and make stories up about politicians they had as customers. They already employ ex news crap staff who maintain their gutter standards and are doing their best to drag the abc down. Chasing the slack jawed redneck crayon eaters & the cranky grey gonad nomads should get the audience figures up
Thats the spirit. If you cant beat them join them.

“Nude weather” certainly sounds better than the pap they’ve been churning out on News24 and 7.30 of late.
Interesting to actually see it laid out in an official email though.
There was a time, not *so* long ago, when the author of such a piece of rubbish, would have been tarred, feathered and booted out the door.
Sad times for our national broadcaster under Scott and co.