Zimbabwe heads to the polls today -- but the iron grip of Robert Mugabe, and the passive state-controlled media, is feeding fears the election will not be fair. Some are fighting back. 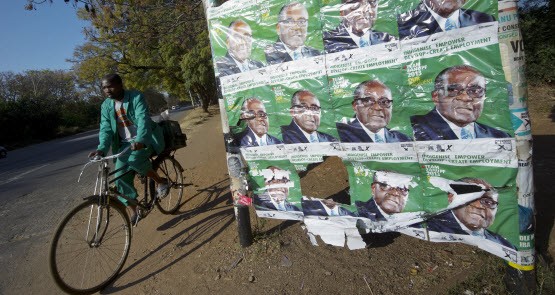 Zimbabwe heads to the polls today with an ailing Robert Mugabe clinging to power, amid reports of electoral fraud and intimidation and fears the violence that marred the 2008 election might return.

The election grants Opposition Leader and Prime Minister Morgan Tsvangirai’s Movement for Democratic Change another opportunity to seize power from the 89-year-old dictator. During the disputed 2008 election the MDC entered a regionally brokered power-sharing arrangement with Mugabe’s ZANU-PF party; the agreement effectively left Mugabe in charge.

Tiseke Kasambala, the Southern Africa Director at Human Rights Watch, told Crikey the corruption and violence that had marred the 2008 election had lingered to influence today’s election, despite nods to democratic reform in recent months.

“We have repeatedly highlighted our concerns that the fear of violence and intimidation by the security forces is likely to restrict voter turnout,” he said. “In the past year we have documented highly inflammatory statements by the heads of the army and the police that they would not accept a result that brought the MDC into power.”

The loyalty of the Zimbabwean army and police has been crucial to Mugabe’s 33-year reign as President, effective from independence from the British in 1980. Mugabe is now the world’s oldest serving head of state, yet he remains as determined as ever to stay at the top despite reports he was diagnosed with prostate cancer.

Despite ongoing problems, Australia’s Department of Foreign Affairs and Trade lifted sanctions on 65 individuals in Zimbabwe, ranging from politicians to military personnel and government officials following democratic reforms to the constitution in May, which limit the president to two five-year terms and establish an anti-corruption commission. “It has been made clear that the Australian sanctions will be reimposed should political reforms be derailed,” Foreign Minister Bob Carr warned.

Research compiled by the Research and Advocacy Unit, a Harare-based independent think tank, indicates there were an estimated 1 million people listed on the electoral roll in May who were either deceased or have departed Zimbabwe. The roll also boasts 116,195 people aged 100 years or older despite Zimbabwe having a life expectancy rate of 50 years for men and 47 for women.

But with state-controlled media in Zimbabwe ignoring the corruption and violent intimidation that are widely reported by human rights organisations, social media has emerged as a platform for Zimbabweans to report on the election themselves. “State-controlled media has had a major blackout on MDC campaign activities whilst turning themselves into a 24-hour mouthpiece for Mugabe’s campaign activities,” Farai Maguwu, the director of Zimbabwe’s Centre for Natural Resource Governance, told Crikey.

“Independent media has given the MDC an alternative avenue to reach out to the electorate and to respond to ZANU PF propaganda. Facebook has played a major role for both parties, but mainly for the MDC.”

On Facebook, the leading voice of opposition is a blogger with the pseudonym Baba Jukwa, a self-proclaimed ZANU-PF insider who has grown tired of nepotism and corruption within the party. Jukwa now has more than 300,000 followers.

Mugabe, who has only 100,000 followers on Facebook, has placed a US$300,000 reward for information on Jukwa, to limit his influence on the elections, according to reports by eNews Channel Africa.

Jukawa, who is using his Facebook page to publicise corruption and intimidation and has become a celebrity across the country, told Crikey the time had come for the Zimbabwean people “to send the beast to the bin”. He said via email:

“I am not trying to do anything but reveal the truth and encourage Zimbabweans to take advantage of social networks in fighting the evil beast and its allies.”

With pages like Jukawa’s becoming popular, social media may play a role in alleviating the limited access of international election observers. Zimbabwe has refused to grant access to observer missions from the United States and the European Union, with 6000 local observers set to work with 600 from nations in southern Africa.

A leading Zimbabwe-based policy analyst has told Crikey the election will bring a change of government should the polling remain free from corruption and violent intimidation. “Tsvangirai has the upper hand and should win comfortably provided that the results are not manipulated and the election is free, fair, and credible,” said the analyst, who wished to remain anonymous.

This may be unlikely; Farai Maguwu reports that in rural areas the ZANU PF is telling people secret cameras are installed in some polling booths and that if they vote MDC they will “visit” them after the elections. “In these cases voters will still go but may be forced to vote for a candidate who is not their choice,” said Maguwu.

Dear Leslie, I am Jewish and appalled at the super-spreader engagement party. Am I responsible too?

Freedom? Just ask the Taliban or al-Qaeda what it means