Chemical dramas. Our ears perked up at this tip about ChemCert, an industry training body that trains up users of herbicides and pesticides. It’s important because without accreditation, you can’t spray.

“Take a look at ChemCert NSW. They have not maintained their RTO [registered training organisation] status, so what is the status of the farmers they have trained? All now illegal users of farm chemicals …”

There was also a suggestion someone high up at ChemCert has been shown the door. There are a few vague references on the internet to this issue, referencing training.gov.au and the Australian Skills Quality Authority (ASQA). So we dug around. ASQA told us this:

After plenty of hounding of ChemCert, chairman Andrew Forrest (no, not that Andrew Forrest) told us the organisation was still registered as an RTO. So it seems our tip is not on the money. If you know more, get in touch.

Macca’s gossip. Fast food giant McDonald’s is still battling the community in its bid to build a restaurant in Tecoma, near Victoria’s Dandenong Ranges. Protesters have gathered at the site again today. The company is suing eight protesters. A tipster passed this on:

“On 3AW’s Neil Mitchell the No Maccas in Tecoma spokesperson mentioned that the Ferntree Gully franchisee had visited the protest site and had a chat with locals claiming the proposed store was a ‘bad move’. This guy is McDonald’s royalty with his family owning 20+ stores around the country. I also know that several other outer eastern franchisees are trying to force a meeting with senior management in an attempt to ‘sort out Tecoma’. Interestingly the Lilydale store [near Tecoma] was giving away free bacon and egg muffins on Monday morning. It looked like an attempt to boost flagging patronage. I know a teacher who is at the local high school and she said ‘kids were arriving at school with handfuls of free maccas’.”

We’ve put that claim to a Maccas spokeswoman. In the meantime, we did some number crunching, courtesy of McDonald’s handy online nutrition guide. There are 1240 kJ in a bacon and egg McMuffin (and don’t forget the 673mg of sodium!). If you give a kid two free McMuffins for breakfast, they’re getting 52% of their recommended daily intake of saturated fat and 58% of sodium. By 9am. Just sayin’.

Chairman Rudd. Kevin Rudd tweeted these two pics over the past 24 hours. Faintly reminiscent of some kind of ex-Soviet dictator whose face cannot be shown. Don’t be the first to stop clapping, people! 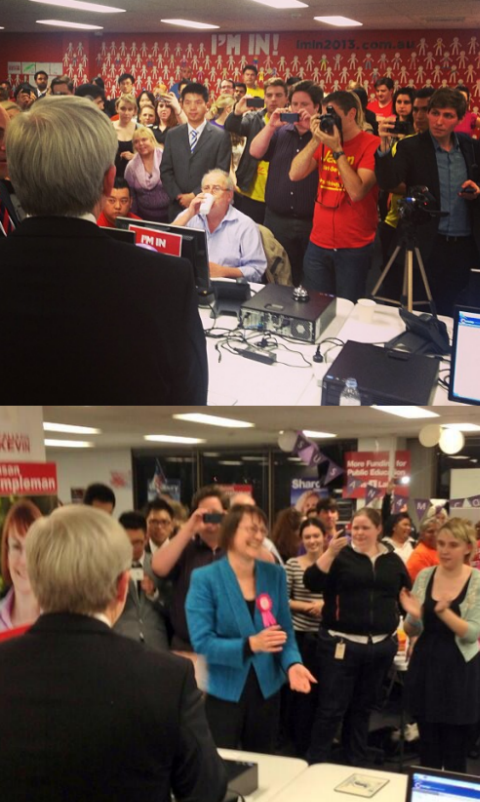 The potential use of a cardboard cut-out of the rear-end of Rudd could he very helpful on the campaign trial. You could tour Kardboard Kevin around marginal electorates. Tips will keep her eyes peeled.

Just hit CC. NZ Young Labour is telling its members to CC PM John Key into all their emails … now that would certainly be annoying. 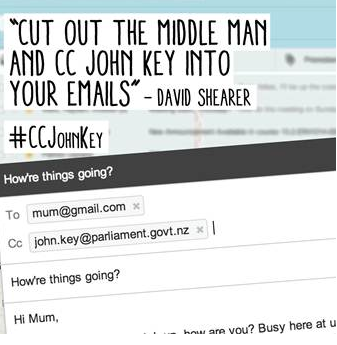 “…was giving away free bacon and egg muffins on Monday morning …”